Prior to the crisis, Birch owned and operated 14 coffee shops throughout New York City including a Roast House where they roast all their beans.

When Jeremy and Paul founded Birch in 2009, they hoped to create community spaces for gathering. In the past month, they worked to move their community of regulars online while creating ways to give back to the city where they built their livelihood.

In April, Birch donated 849 pounds of coffee to local hospitals. They created a Mobile Coffee Shop serving free lattes and cappuccinos at 4-5 hospitals every week. Birch Loves You was born from their intent to create a way for people to join in on their efforts. 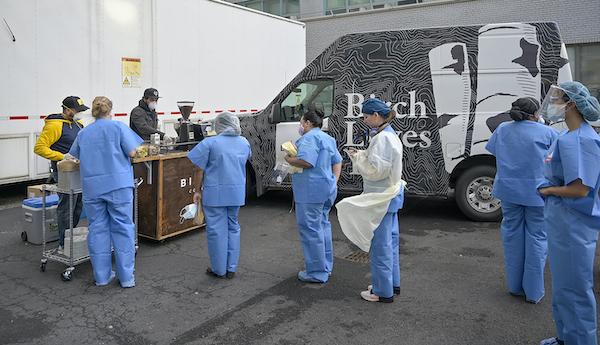 This is how it works: people can purchase anything from 5 lattes ($22) to a keg of cold brew for 60 people ($200) through Birch’s site. The Birch founders are delivering the donations to healthcare workers throughout the city as they continue to visit 4-5 hospitals a week.

Meanwhile, Jeremy and Paul receive thousands of emails from people at home, asking questions about how to brew coffee, what equipment to use, what beans to purchase for different tastes, etc. To maintain a level of human connection (the reason they were inspired to build their business in the first place), they’re also offering virtual home brewing classes, meditations and more on their site.