On April 16th, Bloomingdale School of Music hosted its first virtual community concert and spring benefit, Bloomingdale ONLINE, raising more than $30,000 in support of the school’s Student Scholarship Fund. The evening was broadcast via Zoom to an audience of several hundred live viewers throughout the country. The event can now be seen on Youtube, and additional donations are being accepted here.

Bloomingdale ONLINE honored George Oliphant, host of NBCUniversal’s hit TV series “George to the Rescue”, along with Josh Wiener, president of SilverLining, Inc. The event’s host was Laurie Berkner, a Bloomingdale parent and star of The Laurie Berkner Band.

Laurie led a thank you to Josh and George for their recent renovation of Bloomingdale School of Music’s David Greer Recital Hall and backyard, which was featured on the April 11th episode of “George to the Rescue.” The benefit included video performances by Bloomingdale School of Music students, faculty, and members of the Broadway Ensemble both from their homes and from the renovated concert hall (previously recorded). 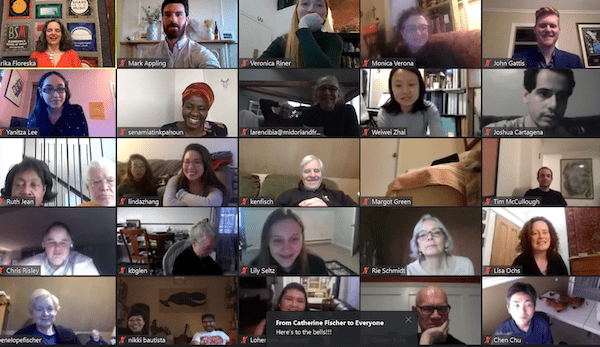 Each year, Bloomingdale School of Music organizes a spring benefit punctuated with inspiring performances by BSM students and faculty. This year’s event included a variety of performances including songs from Thoroughly Modern Millie, Fun Home, Cats and Fiddler on the Roof as well as piano, guitar, trumpet, flute and percussion performances of pieces by composers from Bach and Mussorsky to contemporary composers. The benefit honored members of society who have shown a commitment to high-quality music access. This annual event raises money for Bloomingdale’s Student Scholarship Fund to provide scholarships for students who otherwise wouldn’t be able to afford it, and this year is more important than ever.

Josh Wiener grew up helping his dad repair their family’s Manhattan UWS townhouse. At 6 years old, he was sorting nails; at 11 he was mixing plaster and rebuilding walls; and now, Josh’s company, SilverLining Inc., is renovating some of Manhattan’s most lavish apartments and townhouses as a high-end general contractor specializing in luxury residential building projects in New York City and the surrounding area.
In 1981, Josh met Bloomingdale Board President Ken Michaels at Vassar College, and the two have been buddies ever since. Josh took a few drum lessons at Bloomingdale as a child, and when he heard about our building, he introduced “George to the Rescue” to us. His company, SilverLining, was instrumental in the renovation of Bloomingdale’s concert hall and backyard, bringing together more than 25 vendors to donate time, resources, and materials, as well as oversee all construction.

George Oliphant is a popular Emmy award-winning host of NBC’s “George to the Rescue,” a weekly national home improvement show. George and his team of contractors and interior designers travel the nation rescuing the homes of deserving people. The warm and bubbly Oliphant he got his start as a touring children’s theater actor. He launched his TV career as a veejay for MTVu, MTV’s college music channel, and then on MHD, MTV’s first high-definition music channel.

Laurie Berkner has been a professional musician since 1992, but her success as a children’s recording artist was a surprise to her. “It was so unexpected,” says Laurie. “I’d been performing in rock bands and struggling to write original music. Writing music for kids has not been a struggle at all. The more I started working on material for children, the more I realized that it opened up creativity in me that I never knew I had.”

These days, critics widely acknowledge Laurie’s major contribution toward launching what is now dubbed the progressive “kindie rock” movement – i.e. less saccharine, more rocking music that is not dumbed down for children. But it wasn’t simply an enormous amount of talent that helped create an entire genre and skyrocketed Laurie to her current position as “the queen of kids’ music” (People magazine). It was an ability to gain parents’ enthusiasm for the songs as well. According to Laurie, “When I’m writing a song, I’m thinking about whether the kids will like it and whether I’m going to connect to them through it. I’m also thinking about whether I want to sing it over and over again, so I guess that’s the part that connects with adults. ‘Old MacDonald Had a Farm’ is a great song for kids, but I couldn’t sing it 100 times!” Laurie and her family have lived in the Bloomingdale neighborhood for years and her daughter studied percussion, piano, and composition for more than seven years at BSM.

Founded in 1964, Bloomingdale School of Music is dedicated to the belief that music changes lives and everyone should have access to high-quality music education regardless of economic status, race, religion, ability level, or gender. Bloomingdale is a music-driven community center where all are welcome to join and learn about music from top faculty. We are dedicated to our mission – to make music education accessible to all who want to learn – and remain focused on supporting this mission through our values.

The UWS was my first home when I moved to NYC in 1997, and I was so thrilled to return in 2014 to lead Bloomingdale School of Music. The school is a home to so many, for musicians just starting out to our professional faculty who normally perform all around NYC and the world. Although we aren’t able to meet in person at the brownstone right now, I was so grateful to have this Virtual event to bring our community together around music, as our school continues to thrive with online lessons as well. From the basement of a church to an historic brownstone – now to virtual world until we meet again – our mission is as strong and needed as ever.

Stars of David: The Musical!