Washington Irving called Bloomingdale Village “a sweet rural valley, beautiful with many a bright flower, refreshed by many a pure streamlet, and enlivened here and there by a delectable little Dutch cottage, sheltered under some sloping hill; and almost buried in embowering trees.”


When I think of this former neighborhood, I think of the last scene in You’ve Got Mail, the one where Meg Ryan finally meets ‘NY152’ and, as is the case in Nora Ephron’s romcoms, everything works out just like she had dreamed it up. What comes to mind specifically is the 91st Street Garden, its flowers in full bloom, loud and vibrant florets silently demanding attention just steps away from the hustle and bustle of the city.

This floral urban oasis, maintained by the Garden People and running from 90th to 91st Streets in Riverside Park, is that beautiful that even seeing it through Ephron’s lens does not do it justice. The lasting image for me is of an area bathed in flowers, a constant spring amongst the old brownstones, restaurants, and other local businesses.

While entirely coincidental, the 91st Street Garden’s original home was in a village formerly known as Bloomingdale, from the Dutch Bloemendaal or “vale of flowers.” This parterre was initially installed in a vacant lot at Broadway and 96th Street and remained for three years from 1977 to 1981. Though the present-day garden now sits in the old Strycker’s Bay, both locations are located in the area once known as the Bloomingdale District.

To uncover more information about this former neighborhood, I sought the help of local historian Gil Tauber and leaned on his expertise in cooperation with the Bloomingdale Neighborhood History Group.

Sorting fact from fiction, Tauber confirmed there is no connection with the department store of the same name. He was also quick to point out that Bloomingdale Village was an informal community and not a legal entity like its neighbor Harlem. He explained that unlike Harlem, which had a legally recognized charter and jurisdiction over its public officials, the village was an area of country estates unofficially centered around local institutions like St. Michael’s Episcopal Church and other establishments of geographic ease. 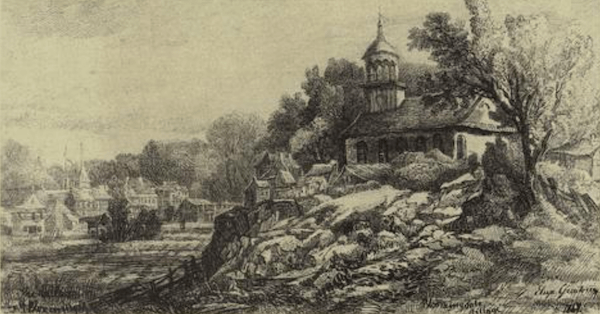 The village was part of the Bloomingdale District, an area that once encompassed everything on the west side of Manhattan from roughly 23rd to 125th Streets, and was based on a given street’s attachment to Bloomingdale Road (now Broadway). 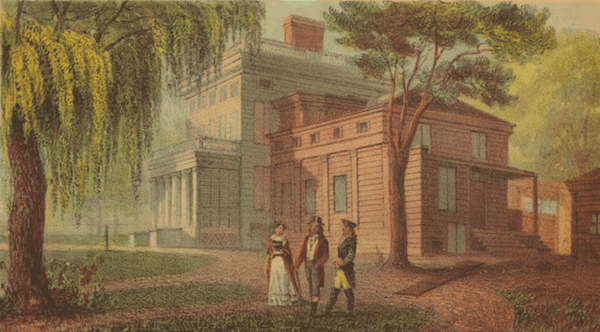 Bloomingdale Road near 75th and the Hudson River, c/o NYPL

The district first appears in government records in 1668 and would expand in name as the Road did, its furthest appellation later reaching as far as 145th Street. It would come to include not only Bloomingdale Village and Strycker’s Bay, but also a village located between 68th and 81st Streets called Harsenville, and the northern villages known as Manhattanville and Carmansville.

Shortly after 1800, the village of Bloomingdale sprang up in the district between Strycker’s Bay and Manhattanville, its soft borders ranging from 96th to 110th Streets between Central Park West and the Hudson River. “Comprised of a collection of some twenty houses or thereabouts along the Road at 100th Street,” the village had its own grocer, shoemaker and smithy, according to The New York of Yesterday by Hopper Striker Mott. St. Michael’s Episcopal Church opened in 1807 on the corner of Amsterdam Avenue and 99th Street and would be the house of worship for Eliza Hamilton, widow of Alexander Hamilton. 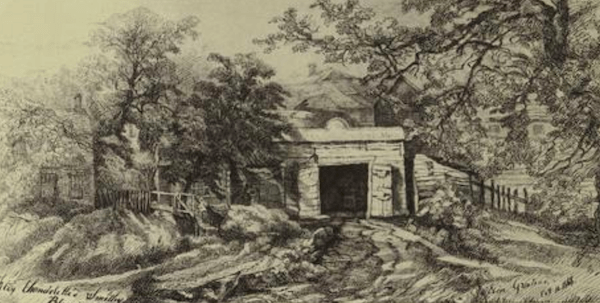 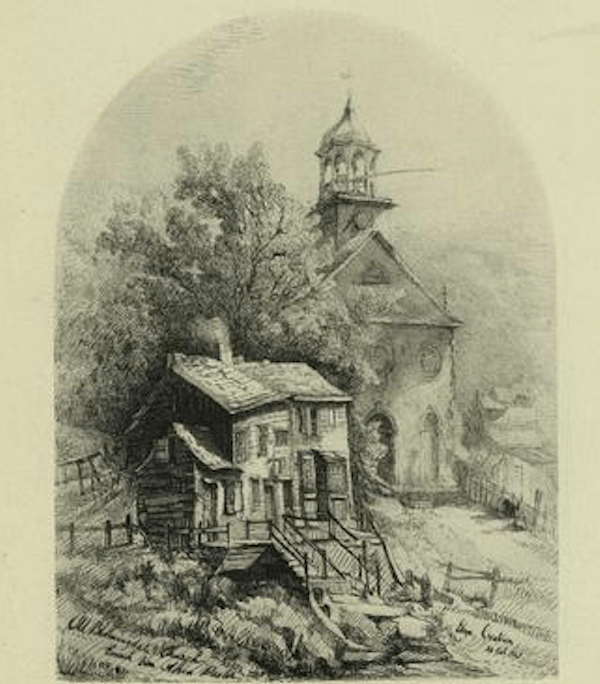 The village’s real estate prices plunged due to the Panic of 1837. “Landowners near Bloomingdale Village had been getting $480 an acre in September 1836; by April 1837 … they were lucky to clear fifty dollars,” as noted in Gotham: A History of New York City to 1898 by Mike Wallace and Edwin G. Burrows. However, by the start of the Civil War, land all over the village was purchased for speculation. Owners focused on maximizing their investments based on the expectation that urbanization would continue to make its northerly advance, as it had reached the West 50s by the 1860s. The area began to attract wealthy citizens including the Astor, Westinghouse, and Davis families. 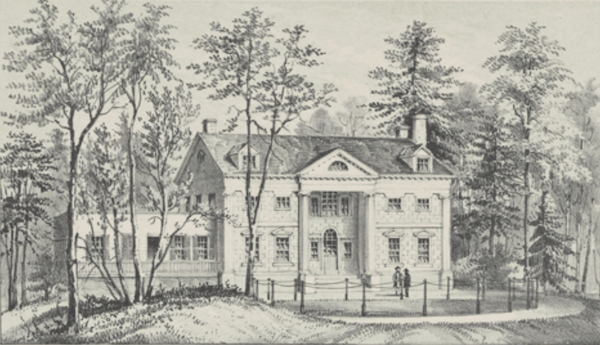 The likeminded landowners recognized that associating their properties with the nearby Bloomingdale Insane Asylum was not a good idea. Thus, the Bloomingdale name fell out of favor and the area would soon become known as West End. 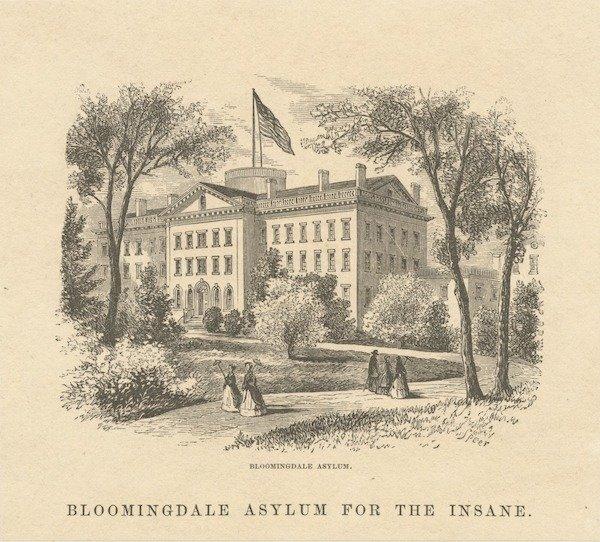 Around this time, according to Tauber, various institutions began to move into the village and would serve to anchor it. Amongst these anchors were the West End Presbyterian Church, the West End Collegiate Church, the Lion Brewery, and various homes for older adults, orphans and the disabled. 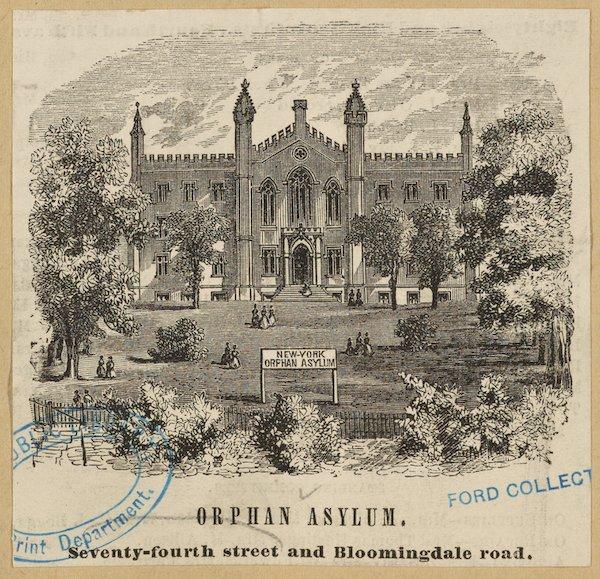 Prominent New Yorkers including John Jacob Astor laid the groundwork for what would soon become the country’s first cancer hospital in 1884, the year of former president Ulysses S. Grant’s throat cancer diagnosis. The first portion of the New York Cancer Hospital was completed in 1887 at 106th and Central Park West.

An 1895 park named Schuyler Square and later as Bloomingdale Square was located at the intersections of 106th Street, Broadway, and West End. The park would later be named Straus Park after Isidor and Ida Straus, who perished on the Titanic and lived a block south of the park at 2747 Broadway. 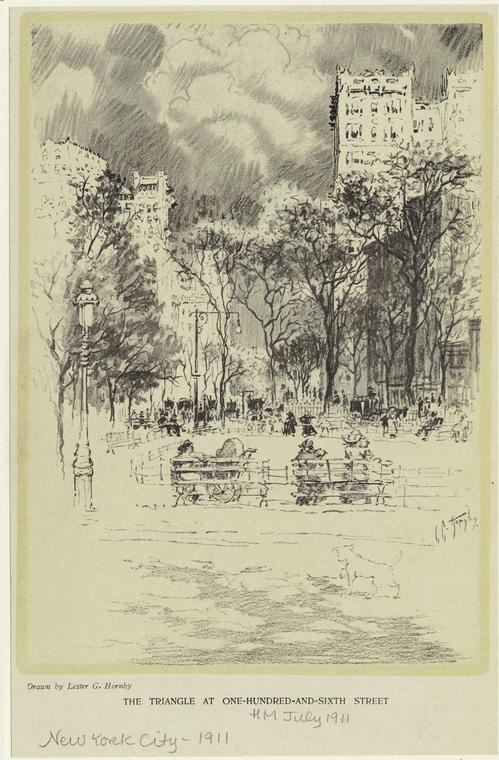 But all of this urbanization would never have occurred had it not been for the expansion of Croton Aqueduct in the 1870s, Tauber says. Without this, the area would have been undesirable and antiquated, even despite the 9th Avenue El system advancing uptown through Manhattan’s West Side. The introduction of running water into the homes and buildings of the UWS is what made these anchoring institutions possible.

In the early 1900s, the village was similar to its modern-day form in that it was mostly residential and sprinkled with restaurants and saloons along Amsterdam and Columbus Avenues. During the prohibition era, Bloomingdale Village was home to a speakeasy named Bobbie & Jimmie Restaurant at 241 West 103rd.

But as Peter Salwen noted in Upper West Side Story, Manhattan’s Upper West Side is a “quirky, sordid, hustling, grandiose, hopelessly overarticulate hodgepodge of a neighborhood.” The area once known as Bloomingdale Village, past and present, is no exception. The village, since its origin, has always had a little bit of everything – farms, saloons, speakeasies, and political figures to name a few. Its more recent residents prove that the same diversity has endured.