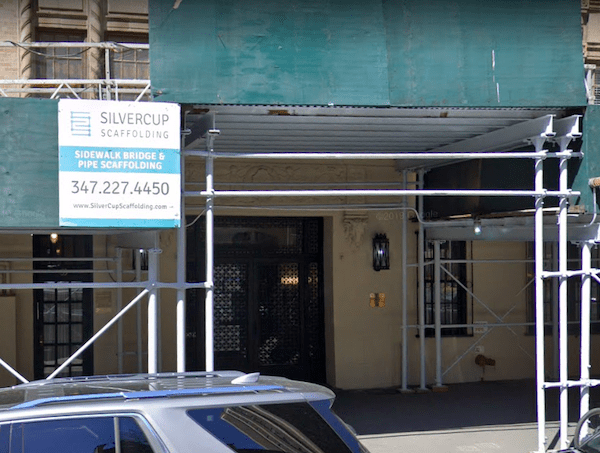 Soon after the scaffolding that’s been up at 51 West 86th Street for the last 15 years started getting some media attention, Manhattan Borough President Gale Brewer joined forces with the frustrated tenants and wrote a letter to the DOB to apply pressure to landlord Weinreb Management.

“We already have enough problems with scaffolding that is up for a short period of time that gathers garbage,” Brewer said in an interview with CBS New York, which also revealed a long-standing sidewalk shed at another Weinreb property located at 350 Central Park West, between 94th and 95th Streets. One resident of the CPW building said that shed has been up for about five years, and she’s never actually seen work being done.

THE 6 WORST LANDLORDS ON THE UPPER WEST SIDE, ACCORDING TO 2020 ANNUAL REPORT

According to the Department of Buildings, there is currently a partial stop work order at 51 West 86th Street which was issued on June 30 for “unsafe conditions.”

While extended scaffolding life spans are nothing new on the UWS (as the comments to our previous post can attest), this building’s could be a record breaker.

DOB Complaints about 51 West 86th Street have been consistent for years:

July 6, 2021: “THE TYPE OF WORK BEING DONE LONG TIME AGO. NOW THIS SCAFFOLDING ARE JUST HANGING AND IT IS A HAZARD. 15 YEARS THIS SHEDIS HERE AND NOW IT COULD FALL DOWN AND IT IS COVERED WITH PIGEON POOP.”

January 30, 2020: “CALLING TO REPORT THAT THE FACADE OF THIS BUILDING HAS CRACKS & MISSING STONES. THIS BUILDING APPEARS TO BE FALLING APART & CAN BECOME A POTENTIAL DANGER TO PEDESTRIANS WALKING BY.”

December 20, 2016: “Cracks in the scaffolding causing the water to pour down when it rains in front of the property door.”

October 17, 2013: “WORK IN PROGRESS TO REMOVE LOOSE BRICKS ON THE SIDE WALL FROM THE LINTELS. DEBRIS FALLING ONTO NEIGHBORING PROPERTY.”

July 5, 2008: “BUILDING SCAFFOLDING AROUND PERIMETER OF BLDG IN WHICH IT HAS BEEN SITTING UP FOR OVER ONE YEAR IDLE. PEOPLE SITTING AND HANGING FROM PIPES. NEEDS TO BE REMOVED.”

CBS New York has been trying to contact the head of Weinreb Management, Jacob Weinreb, since Monday. When they went to his office on 100th and Riverside Drive, an employee told them he was out of the country.

Permits Filed For Senior Facility on 85th and Broadway