On Monday, August 2, 2021, the Broadway Mall Association will launch “Broadway Blooms: Jon Isherwood on Broadway,” a sculpture exhibition at eight locations along the Broadway Malls between 64th and 157th Streets.

This will be the 13th sculpture show presented by the Broadway Mall Association since 2005.

Jon Isherwood’s marble sculptures were created for exhibition on the Malls in 2020. For more than a year, the COVID pandemic delayed their transport from Isherwood’s studio in Italy. The delayed “bloom” of the eight marble sculptures in the form of flowers celebrates the return to life in the city after a long and difficult winter and spring. 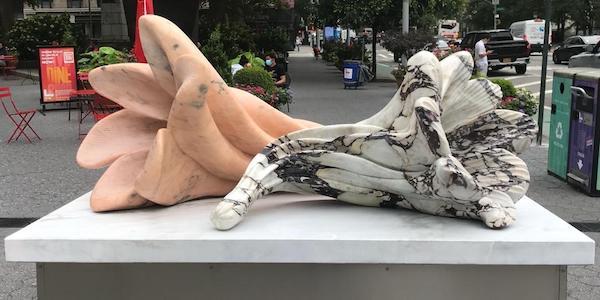 Isherwood’s sculptures can be found at the following locations:

“Why do we give flowers? The act can convey love, celebrate accomplishments, offer comfort in grief, repay hospitality, or simply beautify a space and bring personal joy. Beyond their universal appeal, flowers carry diverse cultural meanings: from the imbued spiritual symbolism of the lotus flower, to the holiday tradition of poinsettias, and the association of roses with love. Across time and space, flowers reflect one’s connection to community and to one another. Nature gifts us flowers, a spontaneous eruption of beauty that brings joy and wonder, and in return we offer them to one another.

Read More: The Peacocks of the Cathedral

“It is in this spirit that I offer the city Broadway Blooms, a series of eight marble sculptures in the form of flowers. Carved in Bardiglio Imperiale, Calacatta Gold, Verde Rameggiato, Fantastico Arni, Rosso Cardinale, Breccia Viola, and Rosa Portogallo marble, the blooms will be installed for a nine-month period in New York City at eight major intersections along Broadway starting at 64th Street (Dante Park/Lincoln Center), then 72nd, 79th, 96th, 103rd, 117th, 148th, ending at 157th Street.

“I chose blooms for Broadway in part because imagery is accessible to the many people that navigate these intersections in their daily lives. They are imbued with a universal symbolism, and can create wonder and joy in their discovery. Placing them in a series of locations across neighborhoods, I hope to promote a sense of interconnectedness in a space that can otherwise feel impersonal, anonymous, and alienating. The natural forms offer visual and psychological relief from the roads, traffic, and architecture in which they are situated – sites of beauty and respite from the built environment.

“Broadway Blooms represents the next development of my ongoing artistic dialogue with form, technology, and the associative sensations of imagery and shape. In my work, forms are compressed, distorted, or squeezed and made more intimate by subtle adjustments of scale. Carved lines contour the surface to emphasize the forms’ growth, create the illusion of expansiveness and provoke associations of patterning, layering and veiled imagery.

“Flowers fascinate us in part because of their delicacy and ephemerality; by transposing their fragile forms into marble, the oldest and most durable of sculptural materials, I hope to inspire viewers to pause and wonder at the productive tension generated by the delicate form and impermeable material. Like real flowers, my installation on Broadway will be ephemeral, but I hope that my artistic offering to the city will be remembered long after the sculptures themselves have moved on.”

Learn more about the artist at jonisherwood.com.

Learn more about the Broadway Mall Association at broadwaymall.org.