Community Board 7 held its final meeting of the year on December 7. While the meeting ran over four and a half hours in total, the Business Session was pretty fluid, with news of permit approvals for two popular Upper West Side restaurants.


“They’re expanding, they’re re-opening, they’re back with us. How exciting is this,” said CB7 board member Linda Alexander, in reference to Smoke Jazz and Supper Club at 2751 Broadway, between 105th and 106th streets. The club was seeking approval for a two-year liquor license as it’s expanding its location and relocating its bar. The approval was unanimous.

Smoke, which suffered some setbacks during the pandemic, announced in July it was planning to expand by taking over and combining two adjacent, vacant storefronts. “We are incorporating the two vacant storefronts to the south into a new space where our historic bar will now be located,” Smoke’s website notes. “This will make the full are of the original club available for listening and dining with more elbow room, and for an expanded stage with improved sight lines.”

Smoke has been a classic Upper West Side haunt since 1999. In a statement to Patch, co-owner and founder Paul Stache said that “When the need to provide more separation between patrons at our famously cozy club became a requirement, we knew we would need extra space to re-open and remain viable.” This vote is surely good news for Smoke to move forward with its expansion.

Next up was Felice at 240 Columbus Avenue, between 71st and 72nd streets. Felice opened its doors back in August – replacing Oxbow Tavern, which hopes to at some point reemerge in the neighborhood. Felice, an Italian restaurant, was seeking approval to expand onto municipal property with the installation of three ‘pod’ seating areas.

“There’s perfect clearance on the sidewalk and this is on the side street, 71st Street, noted Alexander. “We didn’t see a problem there and nobody objected from the community.” This vote was also approved without opposition. 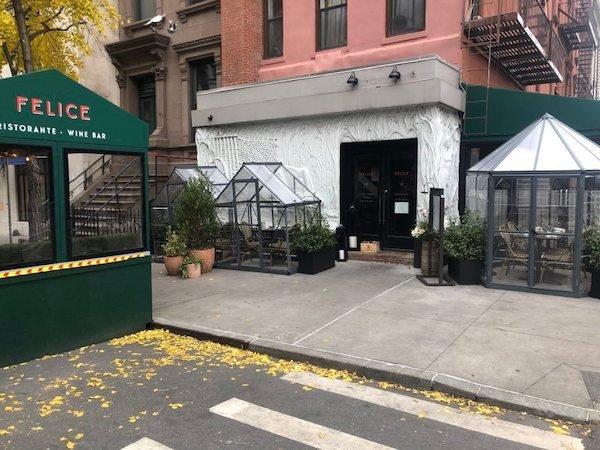 Restaurants with Kids Menus on the Upper West Side