A ground-breaking ceremony was held in Central Park on Thursday morning at the site of Lasker Rink and Pool, which will soon go through a complete reconstruction. The project was first announced in 2018 and was originally scheduled to begin this spring. The $150 million dollar investment set aside for the initiative comes from the Central Park Conservancy, which made the initial $100 million commitment to establish the new Harlem Meer Center, and was supplemented by the City with another $50 million toward construction.

Lasker Rink and Pool’s replacement will aim to provide full accessibility while integrating more smoothly into the surrounding landscape. The finished product will include a larger than Olympic sized pool which will transform into a flexible recreation space in the spring and fall, then into an ice skating rink in the winter. The Harlem Meer Center will be accessible year-round, while Lasker Rink and Pool was used for just six months each year.

“The best part of this effort is that it has been a park by New Yorkers for New Yorkers,” said Manhattan Borough President Gale Brewer, who met with community groups, neighbors and athletes who use the Meer to learn how a newly designed space could best serve them. “When parks are designed for the people who use them, instead of the uncompromising vision of some master builder, like Robert Moses, that’s when parks succeed and enrich the communities around them, because you did it the right way.” 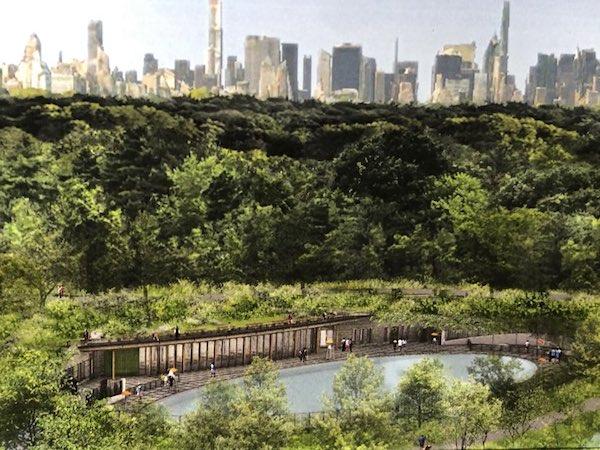 A rendering displayed at the groundbreaking event.

The Center itself is being built where the grandstands currently are; the objective is to form an organic reconnection between the Harlem Meer and the North Woods. Another goal is to restore water flow by reconnecting the watercourse which runs through the Ravine, so it can flow naturally into the Harlem Meer as it did prior to the 1970s Lasker Rink and Pool construction. The construction will also allow people to travel through the north end of the park by re-establishing the pedestrian path (which once ran alongside the watercourse) with a new boardwalk. 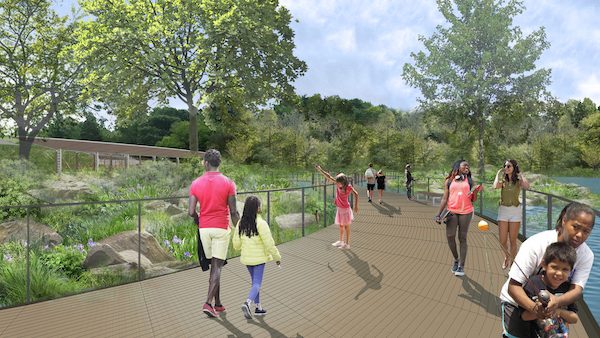 There has been some opposition to the project, especially among swimmers and skaters who’ve argued that the reimagined space won’t leave them with enough room to enjoy their sport; a 2019 petition launched on change.org received over 12,000 signatures. We asked the Conservancy for a response at the time, and they provided us with this statement:

Leading the design and planning effort in collaboration with the Central Park Conservancy is the architectural team of Susan T. Rodriguez Architecture | Design and Mitchell Giurgola. Construction is expected to be completed in 2024.

The Conservancy has also released this fact sheet with more information about the Harlem Meer Center.

Your Transportation Guide to the Upper West Side