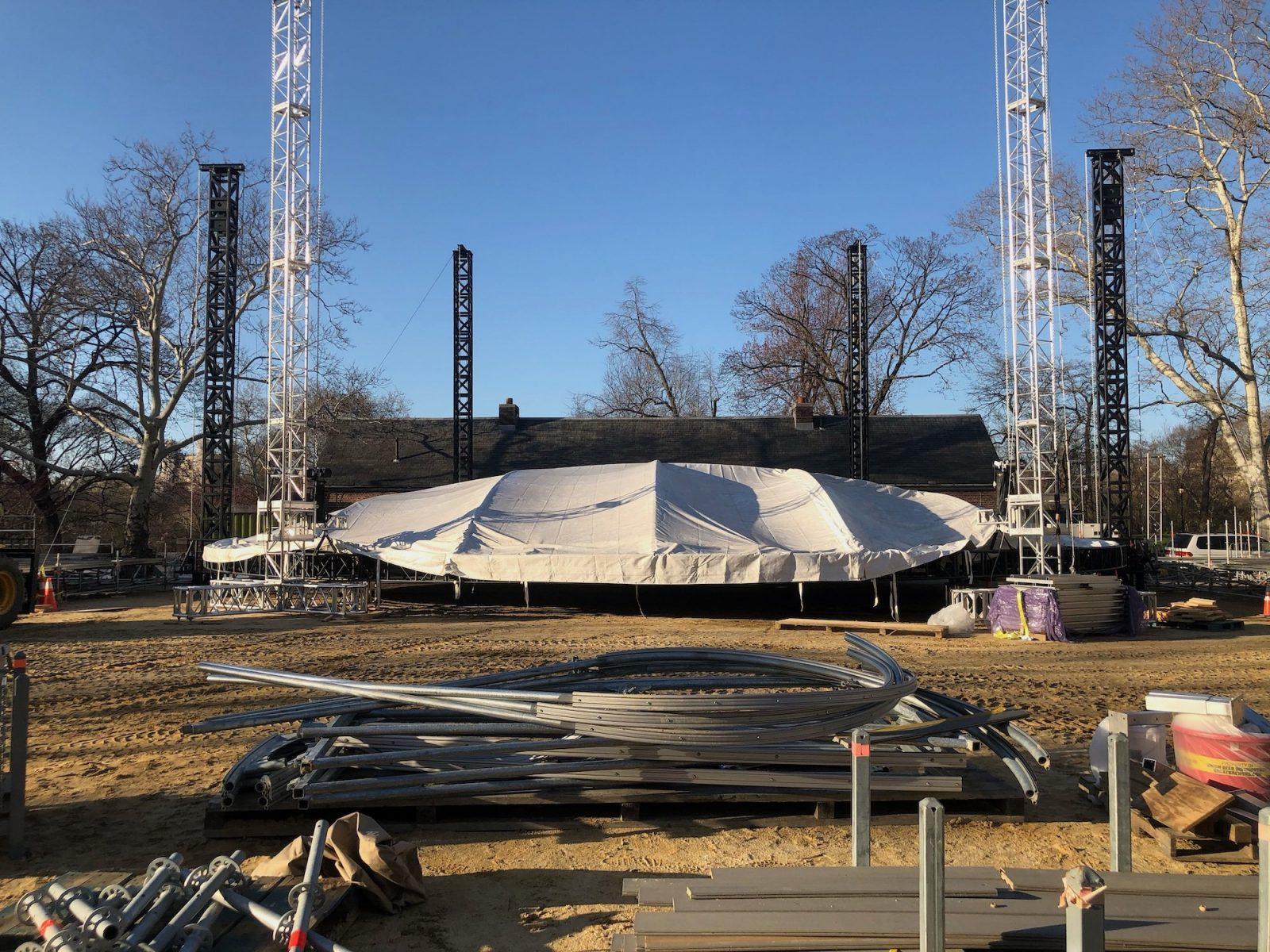 Early April: preparations being made at Rumsey Playfield near 71st Street.

Central Park SummerStage is back and the lineup is spectacular, with jazz extraordinary Herbie Hancock performing a free show on June 11 at Rumsey Playfield to officially kick off the season. Music and dance from around the world will also be featured over the course of the three-month festival.

If you can’t wait for Herbie’s official opening night, fear not. Hailing from Norway, AURORA is bringing her beautiful voice with electropop swirl to SummerStage on Saturday, June 4. Then comes American rock cornerstone Modest Mouse on Wednesday, June 8. The group’s Isaac Brock has been regarded as one the greatest lyricists of all time. He also has a history of wildly unpredictable antics onstage. Both Mouse and AURORA are ticketed events.

Firing it up in July is guitarist, poet and activist Michael Franti & Spearhead on Sunday the 3rd.. Fans of the ’90s will also see the return of the Barenaked Ladies to SummerStage, along with supporting acts the Gin Blossoms and Toad the Wet Sprocket, on Wednesday, July 6.

Slated for a free show on Saturday, July 9, is Latin Grammy winner Carla Morrison, along with Love of Lesbian, Dannylux and Canyon Cody, who were all featured in this year’s Latin Alternative Music Conference. Korea Gayoje also returns in 2022 with K-pop quartet Brave Girls headlining a free show on Sunday, July 10.

Dance programming will grace SummerStage on Wednesday, July 13, when Art Move Concept brings forth its blend of hip-hop with circus arts, mime and contemporary dance. Joining Art Move Concept for the evening is the Passion Fruit Dance Company, a group that explores social issues and Black heritage through street dance and clubbing-style choreography.

In the electronica category, Caribou is back at SummerStage on Thursday, July 28. Real name Dan Snaith, Caribou played to a capacity crowd the last time he participated in SummerStage, which was 2015. Once again, his show is free to the public.

Getting things going in August is Fitz and the Tantrums on Thursday the 4th, followed by Dominican Day with headliner “El Rey Supremo,” a virtuoso of sexually charged double entendre lyrics, on Sunday, August 7.

I’m marking my calendar for The Wild Hearts Tour featuring Sharon Van Etten, Angel Olsen and Julien Baker on Saturday, August 20. Expect to hear sweet riffs and genuine lyrics over the course of their two-night stand at SummerStage, which closes on Sunday, August 21.

Capping off the current lineup are indie folk rockers The Decemberists on Tuesday, August 23, then we’re blessed with trumpet trailblazer Wynton Marsalis playing a free show with the Jazz at Lincoln Center Orchestra on Wednesday, August 31.

There’s the possibility more shows will be added, along with livestream options like they did in 2021; we’ll update you as we find out more.