One of my mother’s proudest food finds in the early 1960s was a mix of quality, fresh seafood she purchased at Citarella, already in its current location at the corner of 75th Street and Broadway, though under different ownership at the time.

She would stir these bits of fish in white sauce to prepare Coquille St. Jacques, serving it to guests in individual giant scallop shells, following with Quiche Lorraine, salad, cheese, chocolate shuffle … and wine. Guests were all very impressed with her French culinary flair, then pretty exotic in NYC, as it had not yet become the foodie paradise it is today.

Some markets delivered. But, my mother’s preference was to go out to Broadway and pick out her own groceries from the fish shop, butcher, dairy, and bakery.

At that time, we lived on 76th and West End. Citarella was just two blocks away and only involved crossing West End and 75th Street. But, crossing what we called the Broadway Islands, (since the 1980s known as The Broadway Mall), was part of daily life. This stretch separating the two lanes of Broadway featured (then as now) benches at the crosswalks, and the opportunity to sit and people-watch. Those seated could get a good look at the general scene, but especially of those passersby who waited on the island for the light to change before crossing over the second lane of the avenue.

In the late ’50s and ’60s and even ’70s, many people did not own a television. Home computers and cell phones were far on the horizon and only some apartment dwellers had air conditioning. So, going outdoors to sit and chat or people-watch cost nothing, was fun and entertaining. And, accompanied by companions, it was a way some elderly people, often in wheelchairs with blankets across their laps, got some fresh air and socialized. 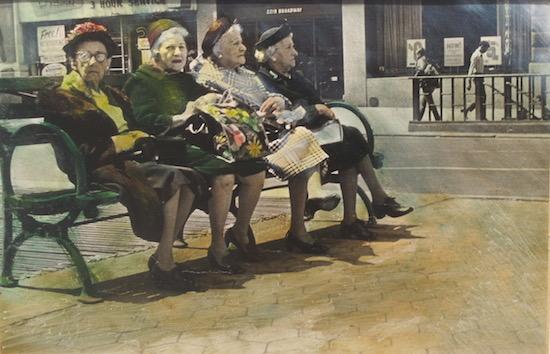 Some vintage photos show neighborhood residents bundled up in coats and hats, sitting out, even on bright, brisk days. The 79th and 75th Street island crossings became particularly familiar to me. I took the uptown subway at 79th Street in front of Cake Master’s Bakery to go to high school and then later took the same route to college at Barnard, exiting on the return trip on the opposite side of Broadway near the Apthorp.

I got my first bank account at the Central Savings Bank (now Apple Savings Bank) over on the east side of Broadway, because I loved going into the high vaulted interior. There was a big show of heavy doors with metal grilles (later removed) separating customers from tellers, clearly demonstrating that your money was safe and secure within these walls.

Verdi Square, known during this period as Needle Park for the brisk drug trade conducted there, was never a big concern to me as a teenager. Like others who lived in the neighborhood, we just chose to walk on some streets and not on others. 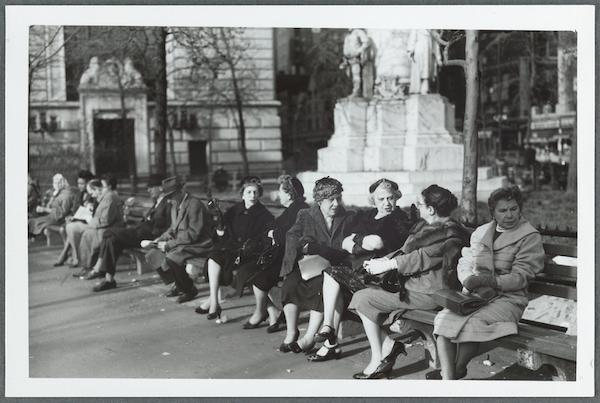 When my children were little, on visits to my parents, we’d also make regular trips to the mom and pop toy store that was located in the Hotel Ansonia a few doors down from Fields Pharmacy at the corner.  This kind of toy shop was familiar in those days. Now, Stationary and Toy World at 125 West 72nd Street is one of the few toy stores that remain. Back and forth across the islands, there were always people sitting on benches or stopping to chat with neighbors. Some came alone, bringing bags of breadcrumbs to feed the pigeons. There is a photo of the Yiddish writer, Upper West Sider I.B. Singer (likely up in the 80s) doing just that.

Children weren’t really encouraged to sit on these benches, and I remember thinking this was seating for “older people.” In the 1960s and 1970s, any location where people lingered was eyed with suspicion. So, you crossed Broadway quickly. The barriers installed in the 1980s were a good safety-minded protection against cars jumping the curb, though not an aesthetic one. 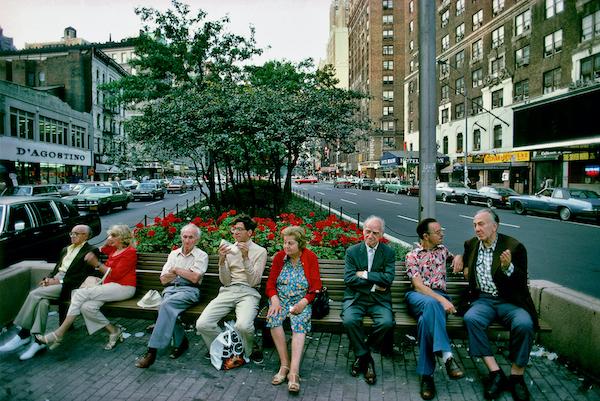 1970s: West side residents relaxing on street bench on 74th and Broadway. Photo by Jon Love

That came later with plantings, art installations and maintenance supported by the Broadway Mall Association. The whole Verdi Square area was increasingly improved beginning in 2002 with the opening of the “new” 72nd street subway station that mirrors the old 1904 one still in use. Seats on this part of the mall are regularly occupied with people taking in some sun over a coffee or takeout salad. The more recent addition of tables and chairs in the area surrounding the statue makes the area’s edgy history hard to believe. I come out of the subway near the 72nd Street crossing all the time and often sit on a bench. Not so much to people-watch as to check my cell.

Best Spots for People Watching on the Upper West Side