A parrot was stuck in a tree on 87th and Columbus Avenue on Monday, reader Betsy Cadel informed us. She also sent us this photo of the scene as it was unfolding:

The parrot flew from the tree to a building ledge, at which point the bird’s owner almost got a hold of it as onlookers gasped at the exotic animal sighting (video by @westonclong):

Ultimately, the FDNY showed up and the bird was rescued: 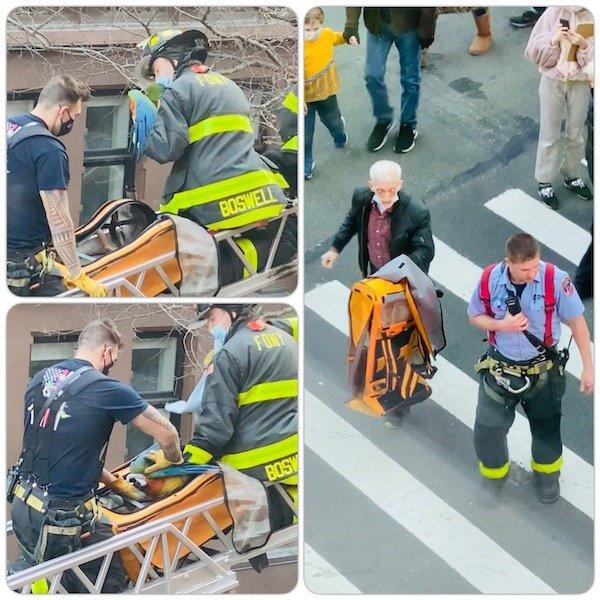 When we shared the first image on Instagram, some speculated that the bird had escaped from the nearby Wild Bird Fund Center, located at 565 Columbus Avenue (between 87th and 88th Streets). However, we reached out to WBF and they told us they don’t work with escaped birds or keep parrots, but they tried to help since it was right on their block.

We also reached out to The Center For Avian & Exotic Medicine, located across the street at 562 Columbus Avenue, to see if they knew anything about this particular parrot. They told us the bird’s name is Dylan, and that he’s safe and sound.

And we contacted the FDNY to confirm Dylan’s current condition. A press representative wrote back with the following statement:

“Ladder 25 was verbally alerted at 18:20 hrs. that someone’s parrot had escaped in route to a veterinarian visit. Ladder 25 was able to extend their aerial ladder to reach the branch where the bird was and a fire fighter was able to bring the Parrot down to safety. No injuries to the parrot or anyone else, returned safely to the owner. No information on who the owner is.”