Around 11:30am on Sunday morning, a group of people, including many children, decorated the street in front of the Lucerne Hotel with welcoming chalk-art messages.

Sara Lind, who is running for City Council on the UWS, had encouraged the community to show up and greet the men staying in the temporary hotel shelters to let them know that, yes, they are welcome on the UWS. The letters YIMBY (“yes, in my backyard”) were scrawled across the pavement. 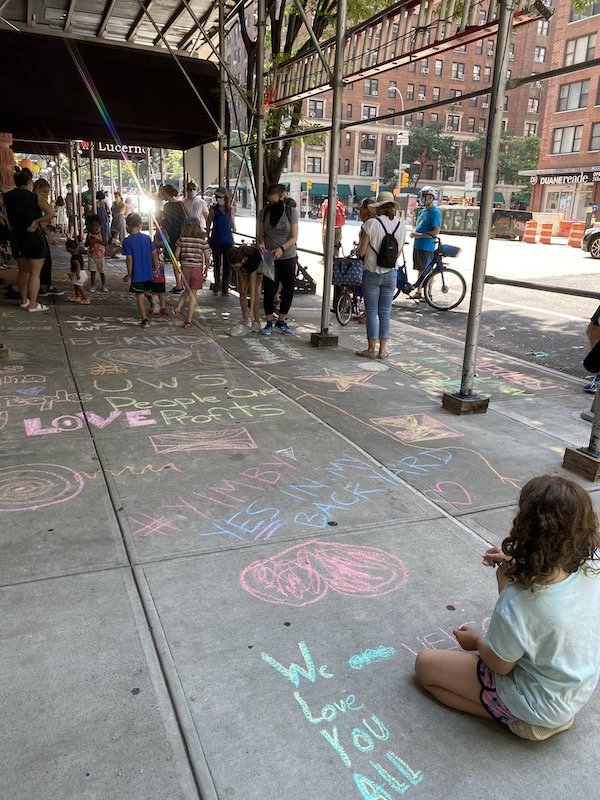 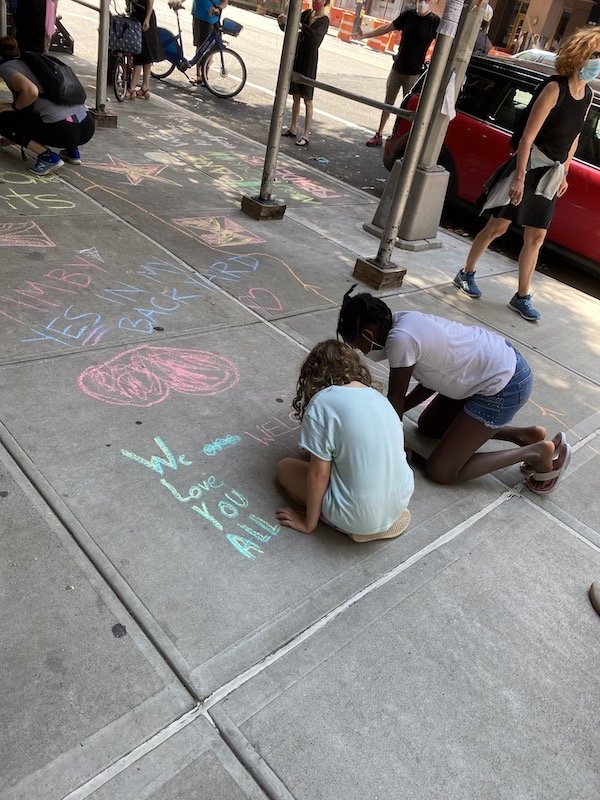 One of the organizers for the event said she blames Donald Trump for the anger neighbors are expressing about the new shelter residents. “It comes from the top,” she said. When asked if she meant De Blasio, she said “No, I mean Trump.” However, there was agreement amongst the participants that the city should have done a better job with communication. “Not that the community should get a vote, but they should have told our council members,” the organizer said.

The general sentiment from those who participated in the event was that these men need a place to go, and every community should do their part to welcome them. It was not confirmed if those participating in the event were residents from the UWS.

At the time of the event, cops were removing a man from the corner of West 79th Street (on the same side as the Lucerne) who was slumped over holding a bottle. There seemed to be a clear effort to keep the area clear so that kids could safely draw.

Security also appeared to be heightened several blocks away at Hotel Belleclaire, where we saw staff members encouraging their residents to use the side entrance. One doorman was seen waving his hands to keep people moving.

Curtis Sliwa, founder and CEO of Guardian Angels, held a second meeting Sunday at 2pm. At his first meeting on Saturday, he noted the concerns of residents and committed to helping.

“I’m going to check this out on my own,” Sliwa said about making sure curfew is obeyed. He spoke to the group about reported drug use by shelter residents, in addition to a lack of police oversight. He vowed to personally go to the commissioner’s home, which is on the UWS, to ask him what he’s doing about these issues.

Sliwa noted that many of these men he has seen before in other shelters. “Many of them have serious alcohol problems. Serious drug addiction. And many of them should not be in shelters to begin with, they need mental health treatment.” This comment was met with cheers.

“I’m being portrayed as a NIMBY, but what I really want to see is these men get the services they need. They need rehabilitation and mental health services,” said one of the women at the Sliwa event.

If there’s one thing the UWS can agree on right now, it’s that the UWS is very divided.