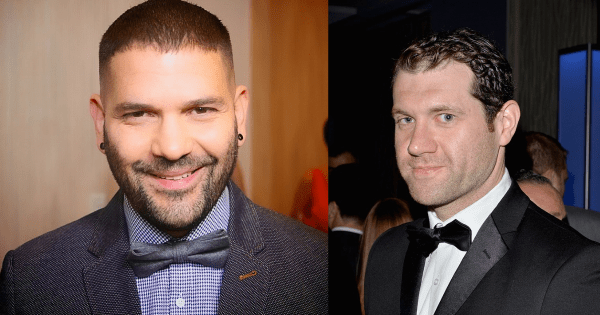 Hollywood’s first gay romantic comedy produced by a major movie studio is scheduled to film this Friday on the Upper West Side. An all LGBTQ+ principal cast will be starring in Universal Pictures’ Bros, which is expected to hit the big screen next summer. The movie will star Billy Eichner and Weeds and Scandal star Guillermo Díaz.

The production team peppered the neighborhood with notices, advising that parking will be held to film scenes between West 64th and West 70th Streets from Central Park West to Amsterdam Avenue: 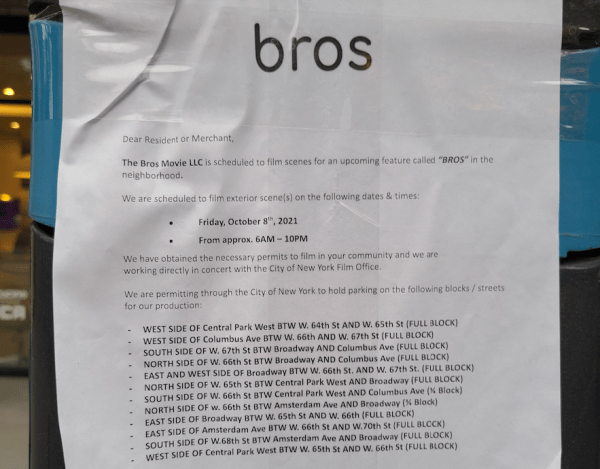 Scenes are scheduled to be filmed from approximately 6am to 10pm on Friday, October 8; if you are parked on these streets during the film shoot, you could be towed at your own expense.

MORE: See What Else is Filming on the Upper West Side!

Eichner, best known for “ambushing unsuspecting New Yorkers for his man-on-the-street comedic game show Billy on the Street,” is also sharing the writing duties with the movie’s director, Nicholas Stoller. Stoller’s prior directorial credits include Forgetting Sarah Marshall, Neighbors (and Neighbors 2), Get Him to the Greek, and the TV series “Friends from College.” He also wrote Night School, Sex Tape, and The Five-Year Engagement, to name a few. Judd Apatow and Trainwreck’s Josh Church will serve as executive producers alongside Stoller.

This is the best thing EVER! I could not possibly be more excited to tell you the ENTIRE main cast for my rom com BROS will be ALL openly LGBTQ+ actors!!! Yes, even in all the straight roles! This is a first for a major studio film. LET’S MAKE HISTORY!!! https://t.co/foLNecGlUU

In shocking news, BROS will be the first rom com about gay men ever produced by a major studio and, apparently, I’m the first openly gay man to ever write and star in their own studio film. Only took 100 years! THANKS HOLLYWOOD!!! ? https://t.co/ysrwEz2Mmo

Bros will be released August 12, 2022, according to Universal Pictures.

Film Screenings At The JCC