Residents at a West 75th Street building are going in one-by-one to gather what belongings they can after being displaced due to a building-wide fire earlier this morning.

At about 10:45 a.m. the smoke detector alarms went off at 54 West 75th Street due to three-alarm fire, a FDNY spokesperson said via email. There were “33 units and about 138” firefighters who got the fire under control just over an hour later. Two firefighters with non-life-threatening injuries were taken to local hospital.

Firefighters operated two ladder trucks to reach the rooftop, and the entire street was blocked off with more than four fire trucks on the street and at least two more on Columbus Avenue. 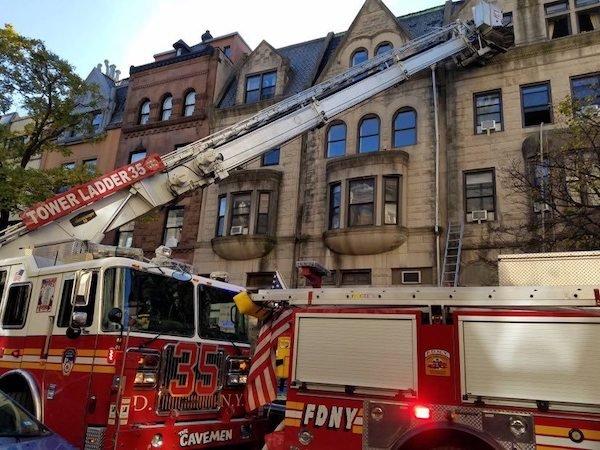 The fire may have started on a lower floor and rose within the walls to the fifth, or top floor, of the walk-up building, according to residents. And, the entire B-Line of apartments on all floors has been closed down.

It is unclear just how long residents will not be allowed back into their apartments, possibly through the holiday season.

If you wish to donate and help these neighbors this Thanksgiving week, a GoFundMe page has been set up for the residents: gf.me/u/y93n95.

Hidden Spots of the Upper West Side