It was an ordinary scene in New York: a flock of pigeons scrambling for seed on a sidewalk. But this story ends with an abduction, a car chase through Manhattan and a mysterious van filled with pigeon feathers.

While the pigeons were casually feeding near 58th Street and 10th Avenue, a man got out of a dark blue Dodge Caravan and threw a net over about 50 birds before violently tossing them into the van and speeding off.

“It was such a smooth operation, as if he’d done it many times before. It was over and done with in 20 seconds,” says Susan Tang, who witnessed the scene on Sunday morning, January 16. “Oh, my god, it’s one of those pigeon-nappers,” said Ms. Tang to her husband; she’d heard of such incidents before. Driving in their car behind the van, they photographed the New York license plate (KLF9514) – thwarting the driver’s attempt to obscure the plate with a scratched plastic cover – and chased the van through the city. 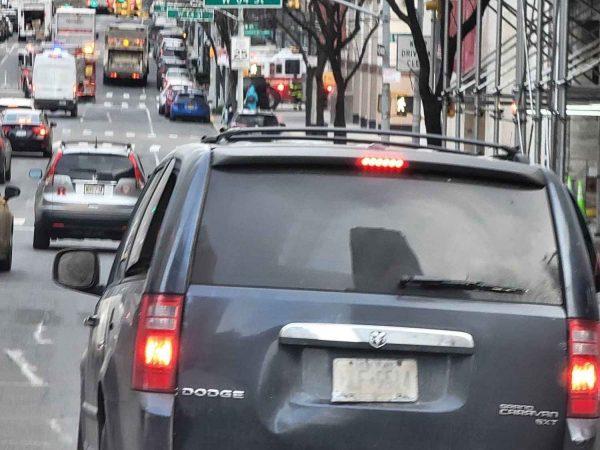 “The driver was aware he was being followed and was blowing red lights and almost struck a group of pedestrians,” says Ms. Tang. “We pursued him pretty hard. At the red lights, I slowed down and looked both ways and then blew them myself.” She finally gave up on the chase when it started to feel too dangerous.

Scenes like this have been reported before in New York—in 2015, witnesses reported hundreds of pigeons being lured with seed, netted and seized in Washington Square Park. These abductions have been linked to cruel pigeon hunts in Pennsylvania, which is the only state known to host multiple pigeon shoots, most of them at private rod and gun clubs, according to the Humane Society. The birds, weakened and dehydrated, are taken to the hunting grounds in boxes and flung into the air by a spring-loaded bottom, then shot at close range by people who see this barbaric practice as a “gentleman’s pastime.” Seventy percent of the birds end up wounded and are either left to die or are brutally killed—often by youths, the Humane Society says.

Ms. Tang and her husband weren’t about to give up that easily. “We called 911 immediately. The operator thought it was a joke,” says Ms. Tang. “She said, ‘We don’t do stuff like that.’ We flagged down two double-parked officers, who said a case like this was out of their jurisdiction. We then tried to file a formal report at the Midtown North precinct, but the cops refused to allow us to, instead telling us to contact their Office of Animal Welfare.” When they called, there was a recording and no opportunity to leave a message. “We filed a 311 report, but the NYPD closed the case within 20 minutes or so.”

They had better luck with the state Department of Environmental Conservation, which was able to track down the license plate. A representative from the agency said it belonged to someone upstate, three hours away from the city, but somehow traced it to a local address, having determined that the owner was staying with someone in the city. The representative found the van filled with feathers and pigeon excrement, but the suspect denied all accusations.

Ms. Tang and her husband are willing to testify but, she says, the DEC representative “is hesitant to pursue the case because we are the eyewitnesses and not him.” Yet she knows of a recent pigeon-napping situation in which the DEC was set to prosecute based on witness testimony; it was dropped when the witnesses got spooked.

Ms. Tang has already determined that the cameras outside Mount Sinai West, where the incident took place, do not extend to the sidewalks, and she is checking with neighboring businesses.

“Do we sound like crazy pigeon people?” No, said this reporter and animal lover. Indeed, there are many who share her outrage. Here is a link to a petition that aims to stop pigeon hunts.

You can also send an email to the Pennsylvania game commissioner, which has the authority to ban live pigeon shoots.