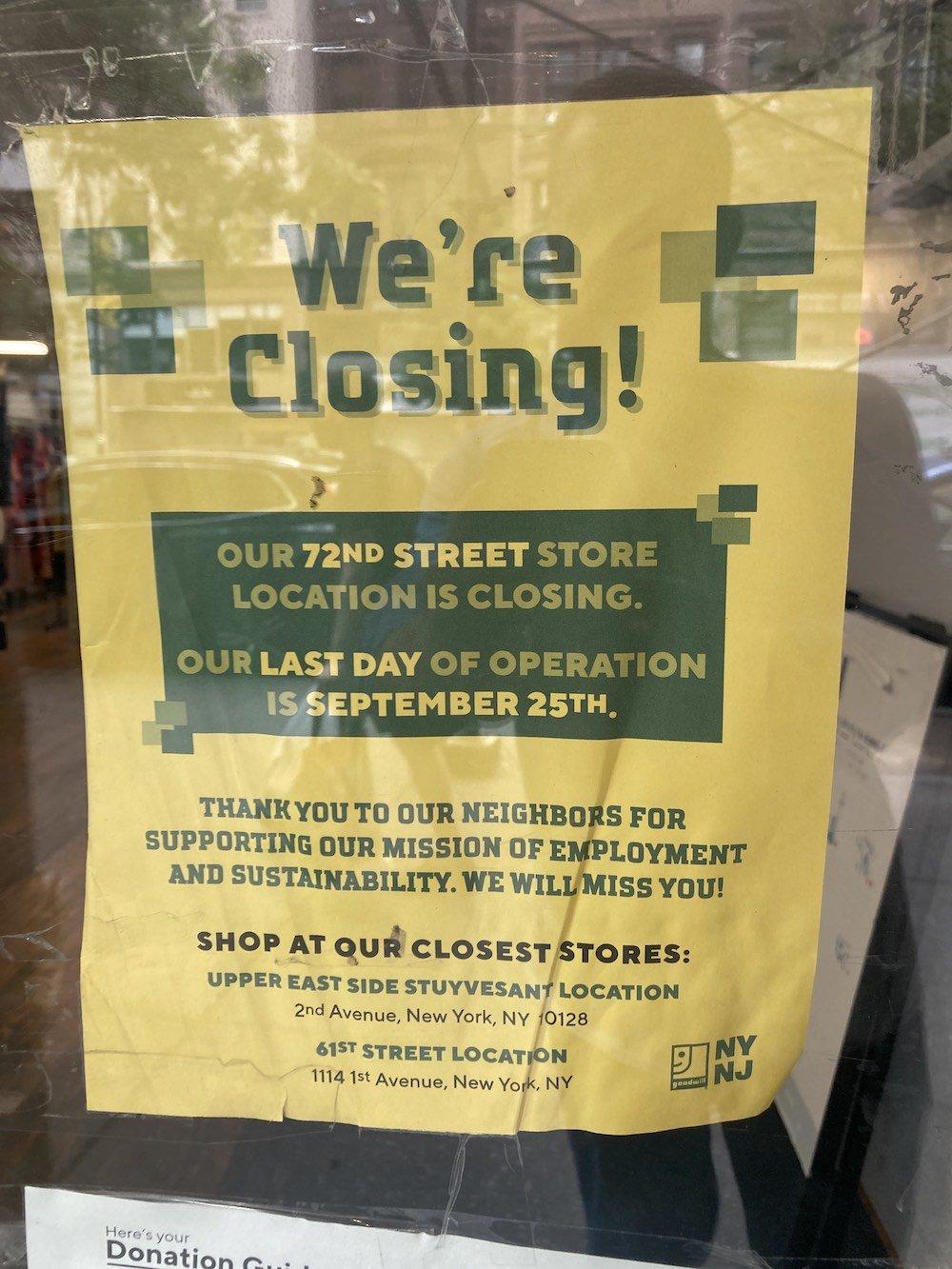 A sign posted on the door of the Goodwill at 157 West 72nd Street says the store will be closing on September 25. Rena, the store manager, says that they will try to relocate employees to other Goodwill locations in the city, and that they are grateful to all their customers over the years.

The building owners and listing agent could not be reached for comment about the store closing, but another sign on the front of the building calls the soon-to-be vacated space a “prime retail opportunity.” The listing brochure says the location has “3,520 SF available, 15’ of Frontage, 1000 SF of basement included, HVAC installed, and is a high foot traffic block with restaurant use allowed.”

This closing is the latest in a string of nonprofit resale location closings on the Upper West Side in the last few years, joining the former Curated by Goodwill store which was at 217 West 79th Street, and the former Salvation Army at 268 West 96th Street.

But don’t worry, Upper West Siders: there are still a few places to purchase as well as donate used clothing, furniture, and electronics.

Housing Works has two locations on the Upper West Side: one at 306 Columbus Avenue (between 74th and 75th streets), one at 2569 Broadway (between 96th and 97th streets). Proceeds go to funding and legislation to help HIV/Aids patients. All sales are final. Here’s a glimpse into the two UWS locations.

Central Park Resale is a consignment, retail and thrift store which opened in October 2021 at 22 West 66th Street. Owned by Tanya Young Williams — perhaps best known for being on “Basketball Wives” — the store offers both “high-end luxury items” and “affordable and trendy clothing.” A true consignment shop, “they will pay 50% of the final sale price when the item sells.”

Unique Boutique is located at 487 Columbus Ave between 83rd and 84th streets, and has a large selection of clothing and household goods. Their motto is “While fashions & fads may come and go, true style is defined by the wearer & never becomes dated,” and they say they strive for “quality over quantity” and specialize in vintage fashion.

The St. Francis Thrift Store, at 214 West 97th Street between Broadway and Amsterdam is part of a Franciscan Community Center and doubles as a food pantry. Hours are from 11 a.m. to 2 p.m. Tuesdays and Thursdays.

For those looking to donate clothes, not shop for them, GrowNYC operates a Greenmarket on Sundays from 9 a.m. – 12 p.m. on 77th Street between Columbus Avenue and Central Park West. They accept clean and dry clothing and reusable textiles and all donations are given to Wearable Collections, which finds new uses for old clothing.

Goodwill would like to thank their neighbors for supporting their mission of employment and sustainability for individuals with disabilities.