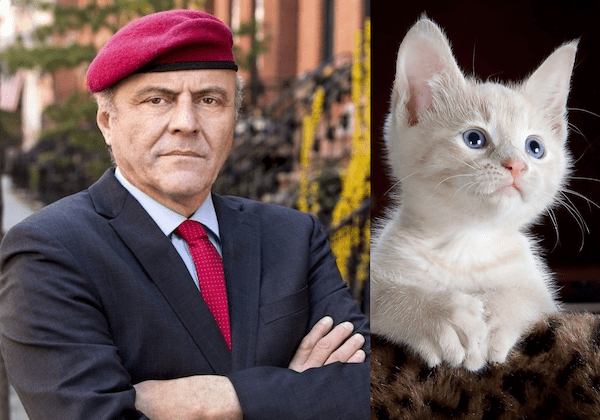 Republican Mayoral Nominee Curtis Sliwa attempted to bring his cat Gizmo to the voting booth with him on Tuesday. The scene unfolded at Frank McCourt High School at 145 West 84th Street, where poll workers initially denied him entry.

Curtis, whose arm was in a sling as he was hit by a cab last Friday, was told by election officials that he couldn’t bring his four-week-old feline (one of his 17 cats) into the polling site – and that he’d also need to take off his classic red jacket reading “Curtis Sliwa For NYC Mayor,” as campaigning is not allowed at poll sites.

“Let them get a cop and have me arrested for trying to exercise the privilege that every citizen has to vote simply because I have a jacket on,” proclaimed Sliwa, the New York Post reports. Once the Guardian Angels founder was directed to a “No Pets” sign, he handed Gizmo off; but then came a drawn-out tussle over his jacket, one which brought police officers to the scene before Sliwa was ultimately permitted to cast his ballot wearing it.

Then, Sliwa’s ballot jammed in the scanning machine rendering it useless and in need of repair. “Sliwa exchanged angry words with Frederic Umane, a GOP board of elections official, over the voting machine drama,” reports the NY Daily News. “He later sparred with election workers when he tried to speak to reporters closer than the 100-foot limit for electioneering outside polling places.”

All in all, it took Sliwa over an hour to vote at Frank McCourt High School. Curtis’ cat was watched by a staff member when he was finally permitted to enter the polling area.

This was not his day.

Roughly 40 minutes after the polls closed, he conceded to the heavily favored Democrat, Eric Adams, in the NYC Mayoral race.