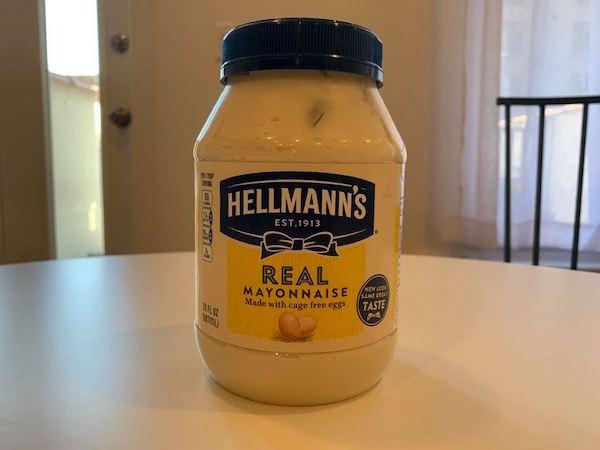 A jar of mayo … from our editor’s private collection.

Memories are frequently prompted by chance, but some items are also deliberately acquired as souvenirs, the English adaptation of the French word “remember.” Associations with a particular location, a building, for example, can take unexpected turns and reveal interesting, even emotional twists.

Talking of memories and associations, who would think, for example, while looking at a jar of Hellmann’s Mayonnaise, that the product has an Upper West Side history?

For many people, Hellmann’s is closely related to the way Mom used to make tuna fish sandwiches for school lunches or picnics, or how Grandma made the filling for deviled eggs for guests. Mayonnaise as a freshly prepared item, created from a mixture of oil, vinegar and eggs, was made in France as early as the 1700s, long before Hellmann’s Mayo was ever sold in a jar with a blue-ribbon on its label.

Hellmann’s NYC story begins in 1903 when Richard Hellmann (1876-1971) emigrated from Vetschau, Prussia to New York City. He opened his own delicatessen at 490 Columbus Avenue, between 83rd and 84th Streets, where he developed his first mayonnaise recipe. He would soon begin selling it to other stores. In 1913, after lots of success, he built a factory to produce his mayonnaise in greater quantities, and began selling it under the name Hellmann’s Blue Ribbon Mayonaise.

In 1915, Hellmann sold his store and opened a small mayonnaise factory at 120 Lawrence Street, which is now West 126th Street. By the end of this year he had a much larger factory in Long Island City.

In 1916, the company became incorporated as Richard Hellman, Inc. He dabbled in other products including horseradish and pumpernickel bread, but then decided to keep his focus on the mayo.

Man Walloped with Umbrella, Slashed in Forearm Outside of McDonald’s