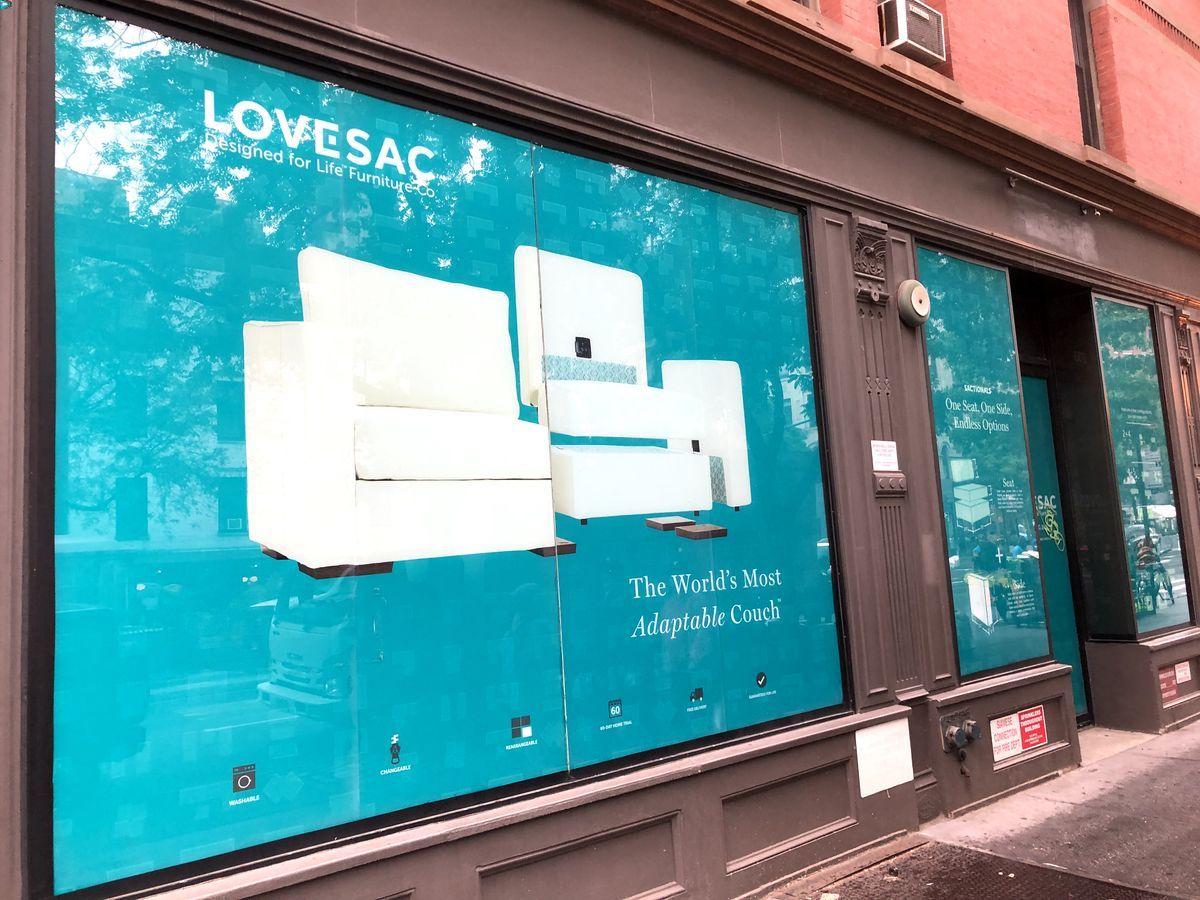 Lovesac is opening at 230 Columbus Avenue.

The Lovesac is a little old place where we can, get furniture. Window signage at 230 Columbus Ave. between 70th and 71st streets says “coming 2022.” The site — formerly occupied by Theory, which closed in 2021 — is being taken over by Stamford, Connecticut-based furniture retailer LoveSac.

Remember bean bag chairs? So, they were actually introduced in Italy during 1968. They were called “Sacco” chairs. Sacco translates to “sack” in English.

“Sacco was meant to be a rebellious chair, and also a chair for the rebellion,” writes MoMA Curator Paola Antonelli. “There are great photographs of it, taken at the time when it [was] new, in which you see it occupied by long-haired guys with beards and beads, by ladies with tresses, by hippies smoking who-knows-what and talking very intensely — talking politics, I imagine…”

It was in 1995 when Lovesac founder and CEO Shawn D. Nelson first created his interpretation of the bean bag chair — the “Lovesac” — in his parent’s basement in Salt Lake City. “The original Sac, which measured nearly seven feet across and was stuffed with everything from packing beads to chopped-up camping mattresses, became the talk of Salt Lake City in the summer of 1995,” said the company in a 2015 press release celebrating its 20th anniversary. “Soon, Shawn began fielding requests for his oversized, overstuffed Sacs from friends and family.”

Nelson officially founded Lovesac in 1998, hiring college friends to help make the “Sacs.” Then came the big break when Limited Too, the now-defunct clothing and lifestyle brand for tween girls, ordered 12,000 fuzzy pink and blue Sacs. “We went from making three or four sacs a week to making upwards of 500 a day,” said Dan Baird, LoveSac general manager, in a 2002 interview with the Daily Utah Chronicle.

Things got rocky in January 2006 “following Nelson’s appearance on an entrepreneurial reality TV show [when] Lovesac caught the attention of venture capitalists,” noted Business of Home. “They worked fast, filing the company, which was at the time $2 million in debt, for Chapter 11 bankruptcy. Lovesac closed its unprofitable locations, exited the franchising model and scaled back its product offerings.”

The restructuring was a success and, by August, the brand left Chapter 11 protection. Fast forward to January 26, 2018, when LoveSac became a publicly traded company on the NASDAQ Global Select Market. Their stock symbol is LOVE.

Lovesac Sactionals let you customize your couch by seat, sides, covers and accessories. They currently have a starting price point of $1,175 for a single seat, going up to $10,582.50 for a 10-seater. Sacs start at $875.

See what else is opening in the neighborhood.

More Stores Board Up for Election Day