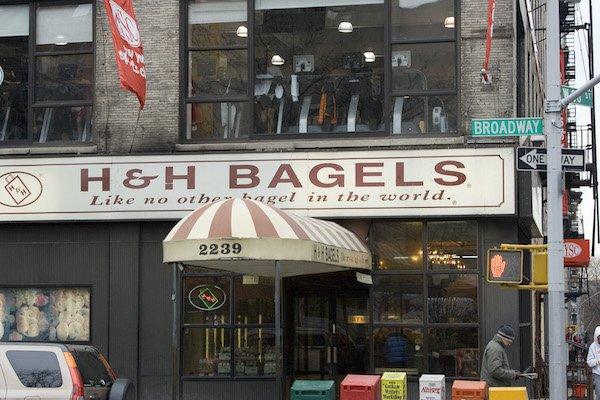 The original at 80th and Broadway. Photo: Mdineenwob, Public domain via Wikimedia Commons

“The air is absolutely amazing,” remarked Tom Hanks’s character, Joe Fox, in the 1994 rom-com classic You’ve Got Mail, as a truck pumped flour into the ground outside of H & H Bagels on West 80th and Broadway. A lot has changed since then, like the closing of that original H&H Bagels in 2011. But the recipe remains the same according to H&H’s newest CEO, Jay Rushin, who recently announced plans to franchise the iconic bagel shop which currently has four shops operating in NYC with a fifth on the way.


“It’s a complicated history,” Rushin told I Love The Upper West Side during a Zoom interview. He detailed the brand’s path beginning on the Upper West Side in 1972, when Helmer Toro and his brother-in-law bought Midtown Bagels at 80th and Broadway. Toro soon took full control of the business and opened a second location in 1974, H&H Midtown Bagels East, at 1551 Second Avenue on the UES. Come 1979, H&H went bankrupt for the first-time, which resulted in another company headed by Perry Alexiou taking over control of the East Side store.

The two bagel shops tolerated one another for a while. Toro’s H&H was selling more than 100,000 bagels a day, banking $11 million in sales in 1997, dwarfing Alexiou’s $2 million at the East Side shop. Then on December 18, 1997, Seinfeld airs “The Strike,” which used a stage-set version of Toro’s West Side H&H, and things go gang busters for him. Business is booming.

Read More: Seinfeld Locations on the Upper West Side

When Alexiou launched a global marketing campaign for ‘H&H Bagels East’, Toro brought forth a lawsuit claiming ‘H&H Bagels East’ was riding his coattails. “They were trying to trick the public,” he said in an interview with The NY Times. “People would go to places and think they were getting H&H bagels, and they were not getting the original bagels.”

Alexiou’s company countersued and in 2000, a judge found Toro had the sole right to use the original H&H Bagels name, logos and slogans – including “Like No Other Bagel in the World.” The judge also ruled Alexiou could no longer call his store “H&H Bagels East” and had to go by the name in the bankruptcy papers: “H&H Midtown Bagels East.”

Then the yeast went bad for Toro. On November 18, 2009, Helmer was indicted by the Manhattan District Attorney for stealing, withholding taxes and evading unemployment insurance taxes. Come May 27, 2010 Toro pleaded guilty to grand larceny for cheating on his company’s taxes.

In his negotiated plea agreement with prosecutors, Toro admitted to creating fake (shell) companies to get a lower rate of unemployment tax insurance and was made to pay restitution covering the stolen state funds – $337,261 in employee withholding taxes for about 100 workers and $206,151 in unemployment insurance dues he failed to pay, the NY Daily News reported. Toro was sentenced to 50 weekends in jail, which he served on Riker’s Island.

When Toro went bankrupt again in 2011, that marked the end of the original H&H with the Upper West Side shop closing in June of that year. Toro’s other H&H outpost on West 46th Street followed suit, shuttering in 2012.

Current CEO of H&H Jay Rushin made it clear that when Toro’s H&H locations bit the big one, “the Upper East Side location kept doing their thing under different ownership and that never changed.” That’s the same H&H location Toro opened in 1974 and lost control of in 1979 following his first bankruptcy. Rushin acquired the existing brand of the Upper East Side location in 2014.

Rushin told us that “After getting involved and situated on the Upper East Side I contacted a trademark attorney and we went through the process of trying to track down where all the other [H&H Bagels] trademarks resided. Turns out the IRS had seized them in 2011 as part of their efforts to recoup that money that was lost and owed from Helmer to the IRS in excess of $3 million dollars.”

In 2018, the IRS held an auction for the rights to use H&H assets including slogans, logos and trademarks. Rushin told us they “attended the auction, won the auction and that’s when we were able to kinda put together all of the historic and existing trademarks of everything related to H&H Bagels.” Rushin now possesses the rights to the cherished tag line, “Like No Other Bagel in the World,” and H&H Bagels name.

Any confusion over seeing H&H Midtown Bagels East on Columbus Avenue since 2016 should now be quelled. It’s all H&H Bagels at all four locations currently in operation, and will be for all future H&H’s that open.

Rushin told us “There was a lot of confusion around the West Side bankruptcy and the Upper East Side and I felt the then-owner’s kind of gave up an opportunity there, to make sure everyone knew that they were still operating and still had the original H&H recipe, and original process, and nothing had ever changed on the Upper East Side.”

When asked to confirm if the H&H Bagels that are made today are prepared the same way they were at the original outpost, Rushin said “Yeah, we still make the bagels with the same recipe and the same process. We don’t cut any corners. We still use the highest quality ingredients that you can find, which is why the bagels are still so great.”

Rushin went on to say how “it’s very easy to lower the quality of your product and save a lot of money on the cost side, but that would certainly interfere with the customer’s experience and we’ve never even contemplated that. We’ve actually done the opposite; we’re always looking to increase the quality of the product.”

As H&H Bagels looks to franchise, Rushin said he’s targeting the top 50 metro markets in the United States. He’s looking to choose the highest quality partners out there, people who love the brand, the product category and who can be “really outstanding operators.”