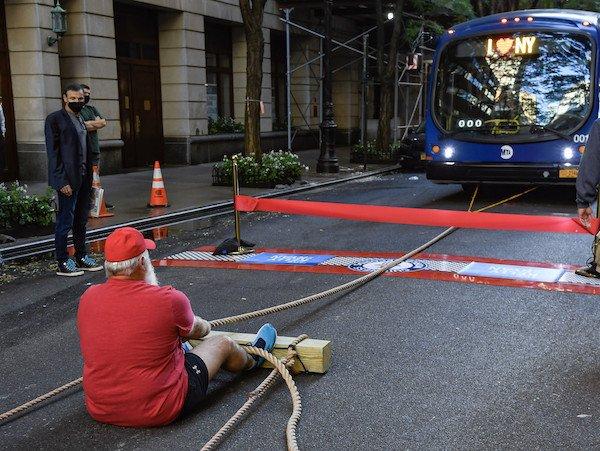 The feat was broadcast on “Live with Kelly and Ryan” outside of the program’s Upper West Side studio.

Grunts from the 58-year-old Canadian strongman could be heard along with cheers from the sidewalk crowd. Once the bus passed the finish line, the giant performed a spectacular cartwheel and was deemed “officially amazing” by a Guinness judge.

Fast had set the previous record in September 2017 when he pulled a bus weighing 24,427 pounds.

“We are happy to partner with ‘Live with Kelly and Ryan’ and Kevin Fast by providing one of our all-electric buses for his successful record-breaking attempt,” said New York City Transit Interim President Craig Cipriano in a statement. “Our heartfelt congratulations go out to him on his daring achievement. This new world record shines a spotlight on our efforts to be the greenest and most environmentally-conscious transit system in the greatest city in the world.”

Fast, a native of Cobourg, Canada, has broken more than 30 world records including pulling a 208-ton airplane, a 63-ton truck and a 40-ton house.

He’s also broken the record for heaviest sleigh pulled, an accomplishment he achieved while dressed up as Santa Clause.

This Guy is Giving Haircuts in Central Park

The Magic of Morningside Heights