Home
Community
Kerouac, Ginsberg, and Burroughs – and a 1944 Murder in Riverside Park

In a month termed by the New York Times as “too hot for Satan,” the bloated body of 33-year-old David Kammerer surfaced in the Hudson River near West 108th Street in Riverside Park.

He was stabbed twice in the heart “in quick succession” with a Boy Scouts knife at the hands of a friend on August 13, 1944. The killer used the victim’s own shoelaces to tie his hands and feet. “He took off Kammerer’s shirt and tore it into strips and tied them about the body also, and then fastened Kammerer’s belt about his arms,” stuffed rocks into his pockets and, uncertain of whether the dying was already dead, rolled him into the Hudson near West 115th Street around 3 or 4 a.m.

The killer, 19-year-old Columbia University sophomore Lucien Carr, admitted to these details of the murder. He informed the NYPD that he stabbed Kammerer in self-defense after the latter made “improper advances.” There were no reported signs of a struggle upon Carr’s body.


As the stabbing victim was sinking along the Hudson, Carr went to the homes of friends and future literary giants William S. Burroughs and Jack Kerouac rather than turn himself in or even report the matter to the police. He went to see Burroughs first and gave him Kammerer’s bloodied pack of cigarettes. “Burroughs flushed the cigarettes down the toilet, and told Carr to get a lawyer and turn himself in,” according to murderpedia.com.

Kerouac was more inclined to assist his friend and helped him cover up the murder. According to Columbia Magazine, Carr told him that he “disposed of the old man last night” and the pair “stopped in Morningside Park to bury Kammerer’s eyeglasses, then went north to 125th Street in Harlem, where they ditched Carr’s old Boy Scout knife — an apt tool — down a grate. Then, delaying the inevitable, they wandered down to Midtown. They stopped at the Museum of Modern Art, ate hot dogs in Times Square, and ducked into a movie house on Sixth Avenue, where they watched Zoltán Korda’s 1939 remake of The Four Feathers, a British war adventure about cowardice and redemption.” 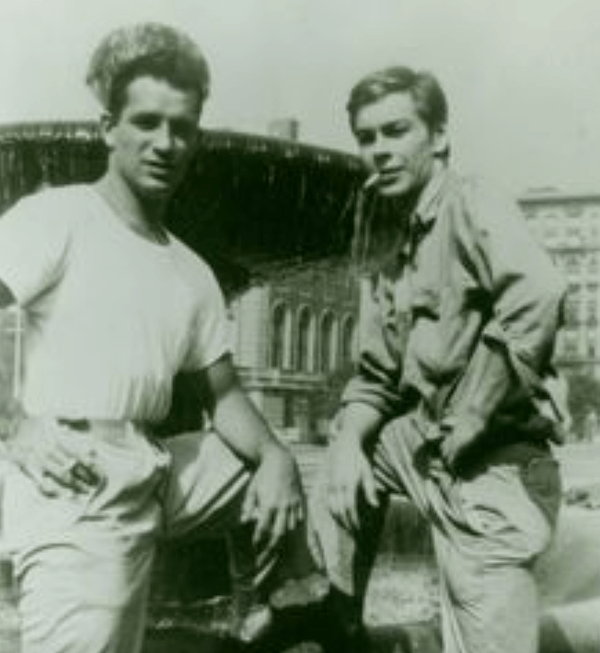 Twenty hours after Carr watched his friend – who was bound and potentially alive – sink into the river, he turned himself in. According to the New York Times, law enforcement was unsure of they were “dealing with a slayer or a lunatic.” After calmly reading poetry all night, presumably that of Y.B. Yeats, Carr showed the police where he buried the victim’s glasses and later “unemotionally identified the man he had killed” when the body was brought ashore at West 79th Street.

Kerouac, then a 23-year old seaman, was taken into custody from 421 West 118th Street and booked at the West 100th Street station as a material witness. Burroughs was arrested about a week later as a second material witness. According to Beatdom, “Burroughs used his family’s money to pay the bail, but Kerouac couldn’t, and was bizarrely forced to marry Edie Parker in order for her family to pay his own bail.”

Carr was initially charged with second degree murder but pled guilty to first degree manslaughter at the recommendation of Assistant District Attorney Jacob Grumet. Carr and his mother painted Kammerer as a sexual predator and did not provide anything more than their own statements to substantiate this. The A.D.A. told the court that he believed Carr did not intend to kill Kammerer and was driven to do so because the victim’s persistent sexual advances made Carr “emotionally unstable,” wrote the Times.


“Carr was sentenced to a maximum of ten years in jail, a light [sentence] based on the defense argument that because Kammerer was homosexual, the murder was an ‘honour killing’ that protected Carr from being raped,” Beatdom writes. As the Columbia Spectator notes, “to an intensely homophobic public, the case was relatively cut and dry: Yes, Carr had killed Kammerer, but his offense was excusable. The heterosexual man had acted in self-defense.” He served two years of his ten-year sentence and was later pardoned.

At sentencing, the murderer and his mother told the court that Kammerer was obsessed with young Lucien. According to the convicted’s mother, Kammerer sent the then 14-year-old boy “desperate” letters after serving as his Boy Scout leader in St. Louis. The boy’s mother claimed she sent her son to a Chicago boarding school to protect him after she discovered the letters.

Kammerer followed. Then he followed again as Carr bounced from Andover to Bowdoin to Illinois, where his “University of Chicago career ended quickly and badly, with an episode that concluded with the young man putting his head into a gas oven. He explained away this act as a ‘work of art,’ but the apparent suicide attempt, which Carr’s family believed was catalyzed by Kammerer, led to a two-week stay in the psychiatric ward at Cook County hospital,” according to Muderpedia.

Kammerer again followed when Carr moved to start school at Columbia University where he met Allen Ginsberg during his freshman year. The NYT reported that “at Christmastime in 1943, according to [James Campbell’s book This Is the Beat Generation],  Ginsberg heard Brahms wafting from Carr’s room and knocked to find out who was listening to the music he loved. Ginsberg was smitten.” Soon thereafter, Carr introduced Ginsberg to Kammerer and Kammerer’s childhood friend from St. Louis, William S. Burroughs. “Kerouac, another Columbian, was ushered in a few months later when he met Carr at the West End,” the NY Times wrote.

As incredible as all of this is, Kammerer’s life would likely have been spared that night if not for a last-minute twist of fate. Carr and Kerouac attempted to flee New York for France on August 13, 1944 via a merchant ship. “Kicked off the ship by the first mate at the last minute, the two men drank together at the Beats’ regular bar, the West End (formerly located at Broadway and West 114th Street). Kerouac left first and bumped into Kammerer, who asked where Carr was. Kerouac told him.” The On the Road author later lamented that he watched Kammerer “rush off to his death.”


Though Carr never became a writer like his friends Burroughs, Kerouac, and Ginsberg, he was “the nucleus of a group of literary-minded undergrads who in the 1950s would be known as the Beats.” He remained friends with the group and became a respected newsman for United Press International before his death in 2005 from bone cancer.

The violent murder of one friend at the hand of another impacted Ginsberg, Kerouac, and Burroughs for the rest of their lives. Each used their future craft to confront it. Kerouac wrote The Town and the City and penned a more literal depiction in Vanity of Duluoz. According to Bill Morgan’s The Beat Generation in New York, Kerouac and Burroughs’ 1945 mystery novel entitled And the Hippos Were Boiled in Their Tanks was also based on the bloodshed.

Ginsberg wrote about the crime in The Bloodsong. Columbia Magazine took the position that “though Ginsberg was the only one who escaped arrest, it was on him that the murder arguably had the gravest impact. Deeply in love with Carr, he had also developed a close friendship with Kammerer and was struggling with his own homosexuality.” As Joyce Johnson wrote in The Voice Is All, Ginsberg “spent some intensely lonely weeks mourning the loss of Lucien and ‘wonderful, perverse Kammerer,’ twice drafting suicide notes in his journal.”