Home
Arts & Entertainment
“Lincoln Center’s Green: A Piece of Heaven or Hell for Kids,” Written by an Anonymous Neighbor

The person who submitted this post has asked to remain anonymous. The content has been lightly edited for clarity.

My seven year old and I cross through Lincoln Center on the way to school. We watched as workers constructed those ramps that look like they belong in a skate park. Then we saw them place the green, faux-grass covering over the entirety of Josie Robertson Plaza, which in its current form is called “The Green.” 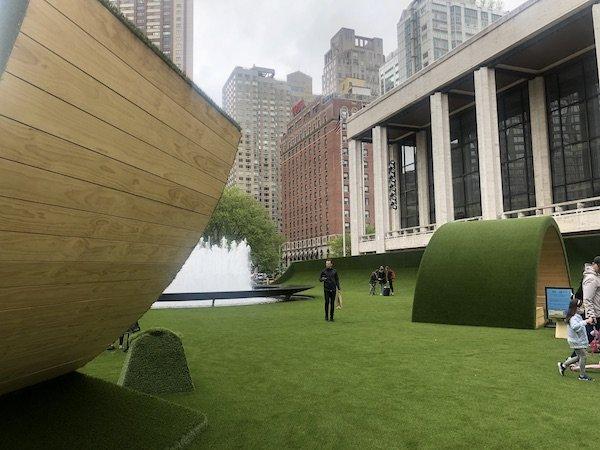 I was impressed by Lincoln Center’s efforts to find creative ways to bring joy to the community by transforming a classic concrete space into a modern lush park. But did they have any idea who the community around them is made up of? Did they not anticipate that this design might cause frustration for families?


Even in my forties, my first instinct when entering the grassy area was to run up the ramps. It calls to you and has this aerodynamic feel to it. On Fridays, my four-year-old daughter gets out of school early, so one week, I took her for a special daddy-daughter picnic in The Green. It was a sunny day and people lounged throughout the park like it was some sort of utopian dream. My daughter immediately wanted to climb the ramps. As she ran up the little hill, a security guard approached and very kindly explained that climbing is not allowed.

Soon after, I sought out some shade and at that hour the angle of the ramps created a shadow form on the curved part of the structure. I slowly walked up the ramp and attempted to sit down, but the plastic-grass and gravity made me slide right back into the sun. My four-year-old, who found this very amusing, attempted to slide down as well. The trusted security person immediately told me: “no sliding or climbing.” I tried to explain to her that I could not withstand the gravitational pull.

She kindly explained that kids can fall off the top of the ramps. Of course, my four-year-old could not even make it up one-third of the ramp’s length, and it would take some serious professional athletics to make it over the top. My daughter was very disappointed. I understand the need for these safety rules, but why would you design something that looks so tempting to a child if they cannot play on it? Did they think that kids would simply look at the ramps and not be tempted to run on them? My kids are pretty tame and I’m all for lessons in resistance, but this would be like putting out a huge table of treats and saying they’re off limits. Having an open field filled with ramps that children can’t run on seems like a form of torture.

Rooftop Film Screenings at the JCC