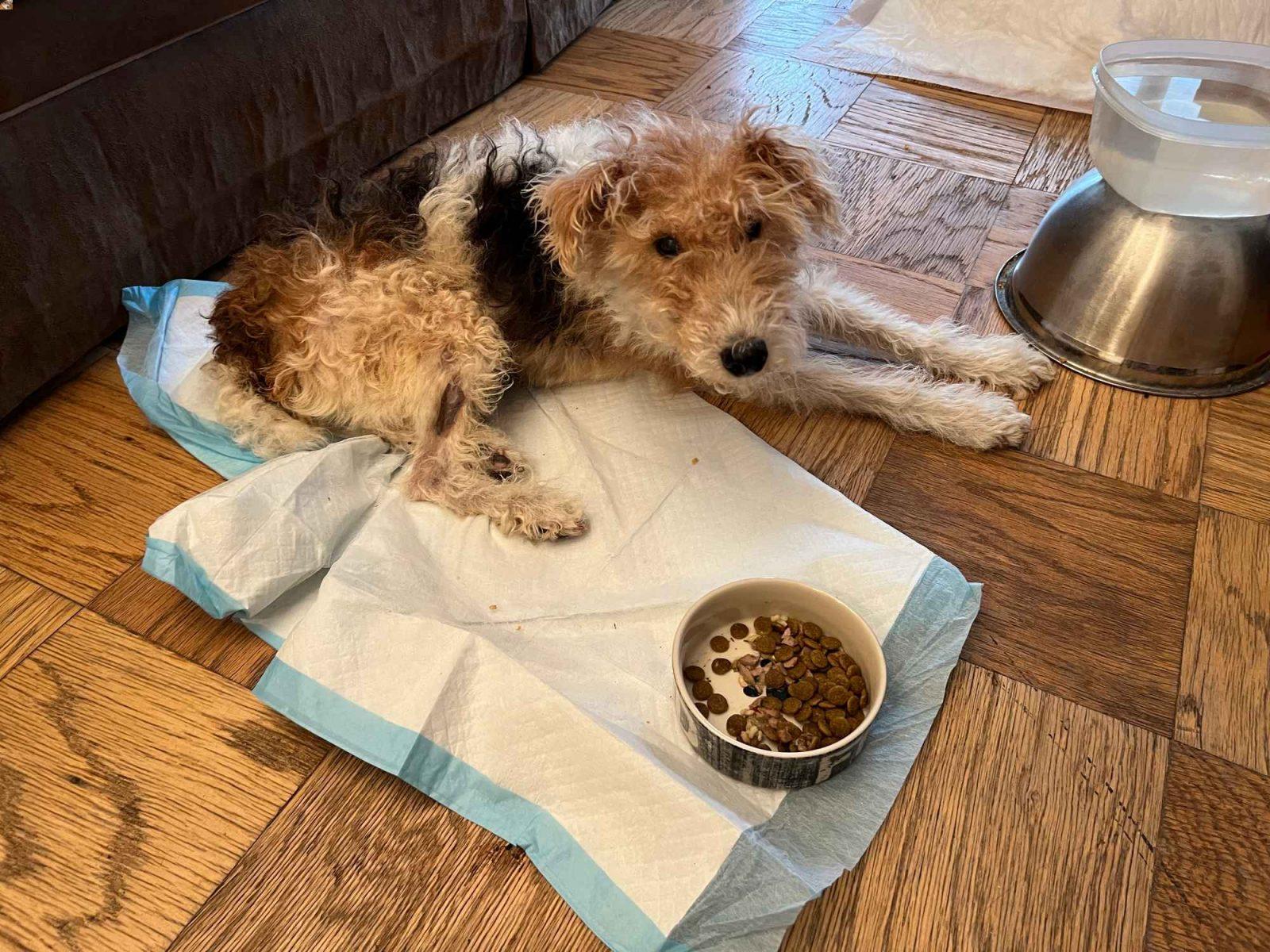 The future for Teddy, a 13-year-old Wire Fox Terrier, is grim.

Since 2020, he has had three major surgeries, including a recent partial bladder removal after spending over a year in chemotherapy. His condition is terminal.

Teddy is spending the time he has left in diapers, with tubes in both kidneys, and on seven different medications to help keep him as comfortable and as healthy as can be. In the two hours I spent with him via video chat on May 8, he barely moved despite the flurry of activity around him. The single noise he made was barely noticeable.

There is no easy way to say it; Teddy is dying. Any pet parent knows how difficult that is. But for Teddy and his dad T.D., a resident at the Lincoln Towers co-op since 2007 who prefers to use a pseudonym at this juncture, the abject sadness of facing the end of Teddy’s life is compounded by the fact that they are facing eviction.

Lincoln Towers, through the 180 West Avenue Owners Corp., and its attorneys at Holland & Knight, sent T.D. a letter in August 2021 informing him that it “received numerous complaints from other occupants” that Teddy was “barking” in his apartment. The letter alleged that the barking was “unreasonable” and demanded T.D. “remedy the defaults by alleviating and curtailing the barking.”

“Lincoln Towers is a pet friendly building and is home to dozens of dogs and other animals. Most pet owners are mindful of their neighbors and the pets have been a great addition to our residential community. The issue here is not with the dog, but rather, the shareholder’s persistent lack of consideration towards his neighbors over the course of 15 months. During that time, the building made numerous written requests that the shareholder take steps to mitigate his dog’s prolonged barking, which, upon information and belief, occurred on a near-daily basis for hours at a time. Rather than hire a pet-sitter to soothe the ailing animal during the long hours that the dog was left alone, the shareholder ignored management’s requests. In sum, the shareholder failed to deliver a solution that would both alleviate the distress of his neighbors and provide the dog with the comfort that he needs as he nears the end of his life. Ultimately, the building was forced to take action to protect the well-being of all shareholders. This is not about a dying dog, but one resident’s lack of concern for other residents.”

Peggy Collen, T.D.’s attorney, believes the co-op’s case against Teddy lacks merit and that the allegations have been fabricated.

“Teddy does not have the strength to vocalize loudly and when he does vocalize, it would not be for hours on end. Lincoln Towers is allegedly pet friendly. Dogs have the right to bark or howl in their apartments,” Collen told ILTUWS. “Residents in any multiple dwelling should not expect uninterrupted quiet. Occupants in multiple dwellings frequently hear babies cry, children running, doors slamming, people walking in the apartments above them, toilets flushing, music playing, televisions blasting. Teddy is dying. He has a right to live in his apartment and a right to die peacefully in his apartment.”

Ms. Collen reported that Holland & Knight could not give her an exact number of occupants who complained about Teddy and only told her that there were “many.” The multinational law firm told ILTUWS on May 10 that “at least three shareholders have complained.”

However, as of three months ago, it appeared that only one neighbor was complaining. According to a February 4, 2022 “Notice of Objectionable Conduct” from the co-op, “a neighboring occupant in an apartment adjacent” to T.D.’s is the source of the complaints. The notice, which threatens to terminate T.D.’s tenancy, cites approximately twenty complaints from “the Neighbor” without distinguishing or noting additional complainants.

The Board of Directors for the co-op met on April 8, 2022 to discuss the alleged “objectionable conduct.” Before voting unanimously to evict ailing Teddy and his dad, one board member insinuated that one way to stop the eviction was to end Teddy’s life, according to T.D.

Another way for T.D. and Teddy to avoid eviction is threefold: Teddy must effectively remain quiet “without limitation,” T.D. must pay $14,502.00 in purported attorneys’ fees, and T.D. must also provide an indemnification in favor of the Board.

Ms. Collen said the demand for $14,502.00 for attorneys’ fees “seems to be a gross overcharge warranting disciplinary action. Holland and Knight’s associate wrote a few boiler plate notices and appeared in a Zoom meeting with the one complainant. Unless the young associate charges $4,500 an hour, the demand for the excessive legal fees seems like extortion.”

“It’s cruel and unconscionable,” Collen added. She explained that T.D. is experiencing anxiety, physical pain in his chest, and loss of sleep.

T.D. told ILTUWS that he wants to be able to live his life and enjoy the time he has with Teddy, whom he calls his best friend. “I’m not living anymore. I’m just existing. I should be able to enjoy the time I have left with him, and this cruelty will be my memories instead.”

Though Holland & Knight claimed that T.D. failed to mitigate the co-op’s concerns, he told ILTUWS that he has made numerous attempts to arrange full-time care for Teddy while he works. But he was quick to point out that the care was arranged so that he can have peace of mind and Teddy can have a companion while he works and not because Teddy is creating the “unreasonable” alleged noises.

T.D. has care in place for Teddy three to four days per week, but notes that sometimes it is less because of the unavailability of the caretaker.

The Upper West Side Is Getting A Sesame Street?!