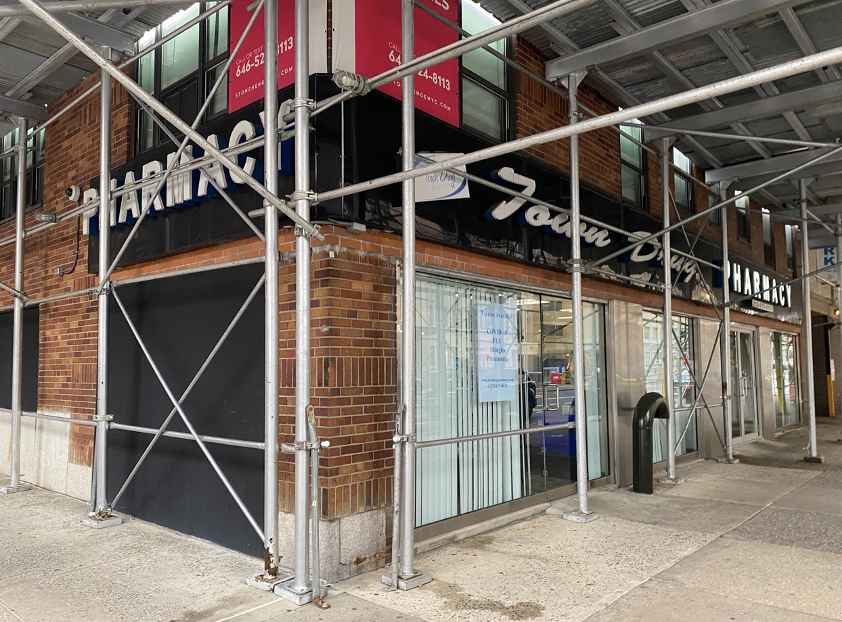 “Are you a lefty or righty?” John Navarra RPh asks Rena Maschinsky. Like five other Columbia undergraduates in the vaccine center, she awaits a flu shot on the last day to receive it before Columbia’s deadline.

“Okay.” He points the needle tip up, flicking the syringe. “We’ll give you the flu shot in the right arm then.”

Navarra wipes Maschinsky’s arm with alcohol, then sticks on half a Band-Aid. “If you hear a squish at the end, that’s normal. Okay, little pinch” he says, administering the vaccine. “You’ve been flu’d!”

Maschinsky laughs. Navarra continues from arm to arm, administering shots, then returns to Maschinsky for her second vaccine, the COVID-19 booster.

“From a business perspective, the independent pharmacy is no longer sustainable,” says Ilana Aminov, president of the New York City Pharmacists Association. Many independents fill prescriptions that cost more than the reimbursement covers, she says, because they won’t deny patients their medications. “I own an Upper East side pharmacy myself, and to be honest, I’m struggling,” she says.

In Morningside Heights, most of the students have left, but Maschinsky’s phone has died, so Navarra lends her his charger. While she waits, he shows her photos of his wife, daughter and grandson.

The 77-year-old pharmacist has a head of white hair, visibly not a victim of hair-loss. He wears loose belted black slacks with a pinstriped button-down – an Airpod case and iPhone holder hang from his belt.

Maschinsky fills out her vaccine form when she’s ready to leave. “What’s the name of this pharmacy, again?”

“I’ll be sure to come back if I need anything,” she says.

“Come back even if you don’t.”

But how long can the city buck the trend? The National Community Pharmacist Association reported this year that 2,000 independents have disappeared nationally since its survey two years ago. Aside from California (second in the U.S. with 1,846 independent pharmacies) and Florida (1,164), states have independent pharmacy numbers in the hundreds, or lower.

“The further west you go, you’re lucky to find an independent pharmacy at all,” Navarra says. Now, the nationwide decline has hit New York City. It’s tough to get local trend numbers, says Aminov, as they are often overestimated, with some pharmacies holding multiple permits. If those permits get counted individually, and not by establishment, the resulting data will be skewed. But one thing is clear; Manhattan independent pharmacies are struggling.

Navarra and Aminov blame pharmacy benefit management corporations, the middlemen between pharmaceutical manufacturers and pharmacies. Take CVS Caremark for example, a $200 million corporation which, Navarra says, gives preferential treatment to its own entities. Nearly 80% of independent pharmacies surveyed by the national association this year had patients transferred to large chains without the pharmacy’s knowledge or consent.

Aminov notes that large chains lack the personal touch of small local pharmacies. “It’s like going to a friend’s house,” she says. “An independent pharmacy is built on relationships.”

Often, independents operate in ethnically diverse neighborhoods, fostering a sense of familiarity and understanding. A Russian immigrant, Aminov knows this well. “My uncle is diabetic, and he doesn’t go to the doctors. Russians can be reluctant to take medication,” she explains. “But when I know where patients are from, I can help them. I understand.”

At Town Drug, half the patients are Spanish speaking, and Navarra is the only employee, of 11, who isn’t. Customers come to the counter, speak to the staff completely in Spanish, get their prescriptions and head out. Town Drug also retains a handful of patients who’ve been customers since the pharmacy opened 45 years ago. Navarra has memorized their files.

There aren’t many pharmacies left like the one Navarra went to as a kid. He fondly recalls growing up in Bensonhurst, where two brothers owned the neighborhood pharmacy. If Navarra couldn’t get to the doctor right away or needed advice, he could always be taken care of. “They knew us, and we knew them,” he says.

After graduating from St. John’s University’s Pharmacy School in 1967, Navarra adopted that standard. He worked for other pharmacies for a while, then opened Town Drug Pharmacy in 1982, originally on a different corner of Amsterdam, now in a former flower shop at 113th Street.

He remembers his first day well. It was a killer. Navarra worried no one would come in and for a few hours, nobody did. Then, a hospital technician at St. Luke’s across the street (now Mount Sinai Morningside) offered to introduce Navarra to the hospital’s staff. Business rapidly picked up.

“We filled 100 prescriptions our first day, a record for us,” Navarra recalls between bites of low-fat cottage cheese, taking a break in his office. He’s been running Town Drug ever since, usually working three days a week, though this week he decided to work four. Before COVID-19, Navarra took the train into the city from his home in Hauppauge, Long Island; now he drives his Mercedes GLE 350.

He leads a tour through the back of the pharmacy, where pill bottles of all shapes, sizes and colors line the walls: lithium carbonate, Lorazepam, meclizine, haloperidol, hydralazine. The newest hire uses a spatula-type device and a plastic tray to funnel pills into translucent orange bottles.

Pharmacy Technician Ruthie Bauta has been here over 20 years. “When I started, John had black hair,” she says. She was homeless with a young child when first employed as Town Drug’s desk clerk. After about 10 years, and another child, Bauta went back to school to become a pharmacist. Navarra jokes that Ruthie’s really his boss after all this time.

Beyond Town Drug, Navarra has other business ventures, which help keep things afloat financially. Twenty years ago, he founded a disease management company, Town Total Health, whose staff reviewed medication regimens with patients by phone. Navarra built Town Total Health from a 600-square-foot facility on Amsterdam Ave to 20,000 square feet in Midtown before a supermarket company bought it in 2012. All that remains is the space at Town Drug originally designed as a call center, with 12 cubicles and chairs. Navarra didn’t expect it to become a vaccination center, but with the demand for shots, it has. 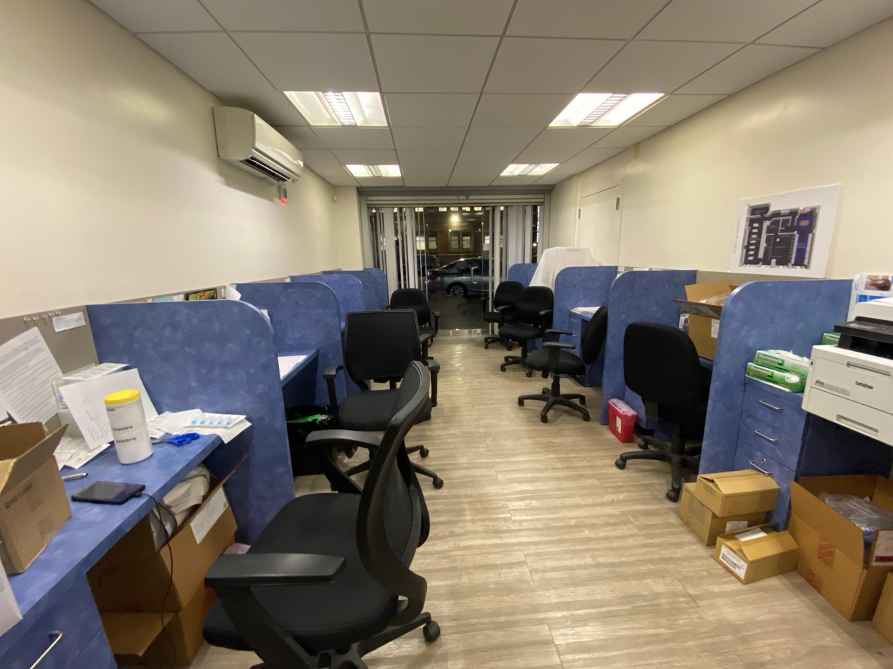 “We’ve had more business in immunization the past year, which has been helpful, but COVID-19 really took a toll on the prescription business,” Navarra explains. His staff has vaccinated patients new and old. For some longtime customers, Navarra made house calls to administer shots. He wasn’t afraid; he took the necessary precautions, and hardly any of the patients were strangers, anyway.

“It’s no different than having them in the store,” Navarra adds. “I vaccinated 100 people today.”

Though neither of his Sicilian immigrant parents worked as pharmacists, Navarra passed on the love of pharmacy to his son Joe, who worked at Town Drug for over 20 years, and to his grandson, a summer employee.

“I’ve been working in the pharmacy since I was five,” says Joe Navarra, also a registered pharmacist and owner of a prescription compounding company.

Later, Navarra ruminates on the pharmacy’s future. He has a partner interested in potentially buying Town Drug when he’s ready to retire, but for now, Navarra enjoys the daily operations.

“Pharmacy is evolving into a different animal,” he says. “Its future will depend on its ability to utilize clinical skills in the marketplace.”

Aminov looks to legislators to help. In 2019, the Pharmacist Society of the State of New York began a campaign to regulate PBMs, lobbying for a bill to preserve the state’s independent pharmacies. Called the Pharmacy Rescue Package, the three-part bill has made it to Gov. Kathy Hochul’s desk, and Aminov hopes she’ll sign it into law before the end of this year.

“John, she wants you to do it,” says a staff member in the vaccine center the next day. An Argentinian woman waiting for her pneumonia vaccine would rather Navarra administer it.

“I’ll be done in a minute,” he says, busy with a Columbia student receiving her flu shot a day late, and a woman who works in TV. The student’s t-shirt has such tight sleeves that she has to take off half the shirt to expose her arm. Navarra administers the shot, unfazed.

“I’m really so sorry about this.” She’s embarrassed at partially undressing.

He shuffles over to the woman in TV, who forgot to skip her thyroid medicine today, as recommended when getting a COVID-19 booster. She’ll be fine, Navarra assures her.

Once they leave, he gives the Argentinian woman her pneumonia shot.

“Little pinch. You’ve done this before,” he says, sticking the band-aid on her arm. They share a few jokes before she leaves with warm thanks.

The vaccine rush is finally over, for today.

Navarra slumps in his chair. “You guys are working me too hard,” he tells his employee. His eyelids are heavy, but his blue eyes bright. 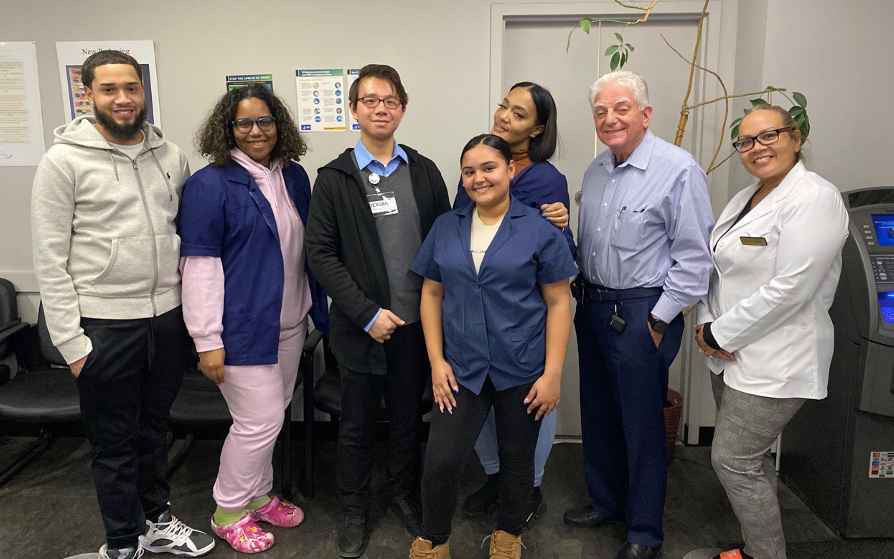