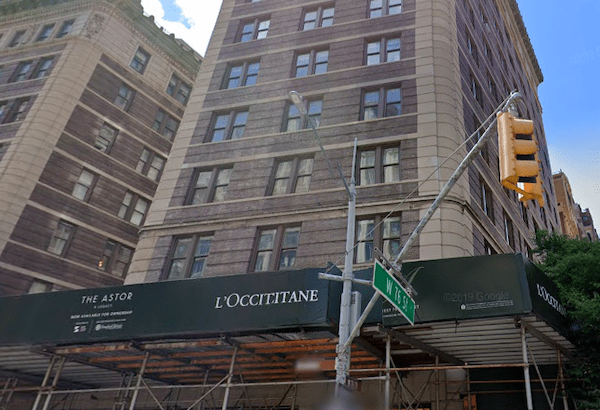 Beauty chain L’Occitane was sued by its landlord, The Vanbarton Group, for failing to pay $746,000 for rent, utilities and taxes for its location at 235 West 75th Street (alternate address is 2159 Broadway), Bisnow reports.

According to the lawsuit, L’Occitane didn’t pay its rent – $62,263 per month – between April and December. It also claims the company owes an additional $24,000 from unpaid property taxes and water bills. In addition, the landlord is asking for an additional $28,000 in interest.


According to Bisnow, L’Occitane signed a lease for the space in 2012, replacing former tenant The Body Shop.

The international retailer, officially L’Occitane en Provence, has stores all over the city, including a location at the Shops at Columbus Circle and on the corner of 69th and Columbus.

On quite a few occasions this year, we’ve seen landlords file lawsuits against large companies for non-payments of rent. In August, it was reported that Bloomingdale’s was sued by its landlord for unpaid rent payments for its outlet location on 72nd and Broadway [Bloomingdale’s is currently open].

Some of the bigger companies which have closed UWS locations this year:

Century 21: closed all 13 of its stores, which included a location on 66th and Broadway

Flying Tiger Copenhagen: closed all US stores including its location at 424 Columbus Avenue, between 80th and 81st Streets.

Jean Louis David: closed all four Manhattan locations, including one at 2146 Broadway, between 75th and 76th Streets.

Unleashed By Petco: closed its location at 159 Columbus Avenue, between 67th and 68th Streets.

Papyrus: closed all locations, including three on the UWS: 209 Columbus Avenue (between 69th and 70th Streets), 2157 Broadway (at 76th and Broadway), and their store at the Shops at Columbus Circle.

5 REASONS TO SEND YOUR CHILD TO CAMP SETTOGA