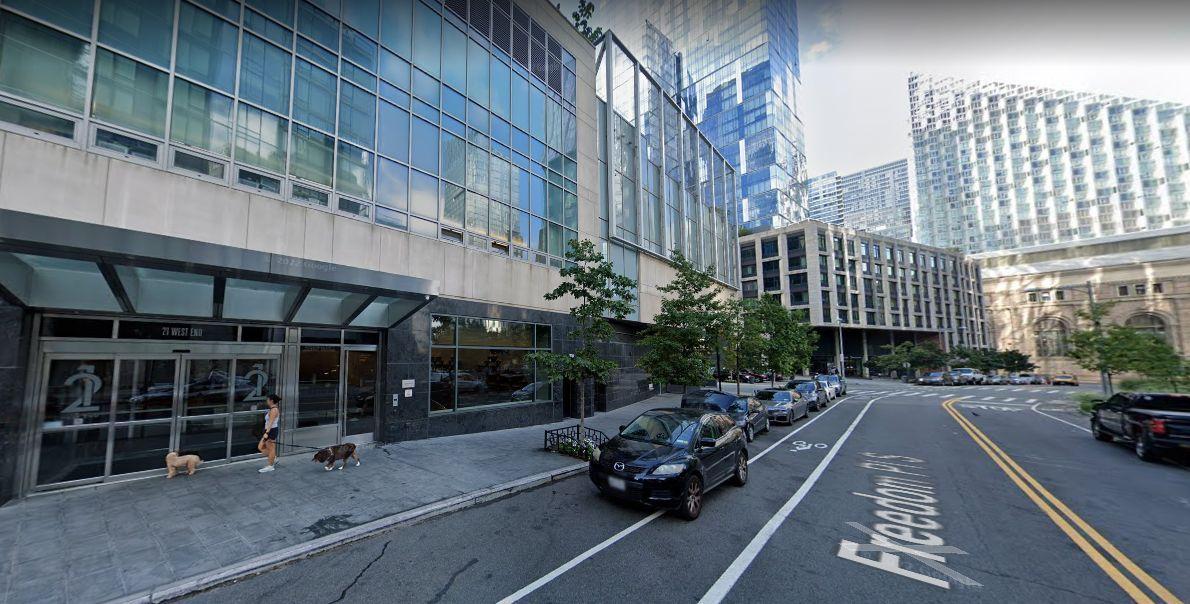 Freedom Place South between 61st and 60th streets. The entrance to 21 West End Avenue is to the left (Google Maps).

An upscale rental building in Lincoln Square is being accused of illegally staking an ownership claim to a public street and towing cars it deems in violation. It even reportedly slaps large stickers on the vehicle’s windows warning car owners they’re parked in a “private parking area” and that their license number has been recorded, the New York Post first reported.

One purported violator is Melinda Scott, an attorney who filed a lawsuit on her own behalf against 21 West End Avenue Apartments after her 2018 Audi Q7 was towed from Freedom Place South between West 61st and West 60th streets on New Year’s Eve. When she realized her car was not where she left it, she “entered 21 West End Apartments to inquire about the Vehicle and was given verbal notice by Defendant’s front door staff that Plaintiff’s Vehicle had been taken by Ben & Nino Auto Repair at the direction of 21 West End Apartments because they unofficially reserved all the parking spaces on Freedom Place South between West 61st Street and West 60th Street for their staff, thereby preventing any other vehicle from parking on the street,” according to the suit.

Scott argues that the protocol to legally tow in New York City “involves contacting the local precinct to get them to issue a summons which would authorize the towing company to then tow the Vehicle, then the tow company must provide the precinct with a written receipt noting the name of the tow company, the date and time of the tow and the location to where the Vehicle was towed within 30 minutes of the towing.”

The relevant precinct in this matter is the 20th, which, according to Scott’s complaint, did not issue a summons and did not receive a written receipt from any tow company that her vehicle was towed.

She further alleges that the street from which her Audi was towed is public, and that the defendants – which also include Dermot Company, which manages the building, along with towing company Ben & Nino Auto Repair – had no legal right to remove her vehicle from it.

She does concede that there is a sign posted with the “intent of and for the purpose of preventing any other vehicle from parking on the street.” However, Scott alleges that this sign, which is affixed by zip tie and nails to a tree, falls substantially short of the necessary legalities for defendants to stake a legal right to tow. 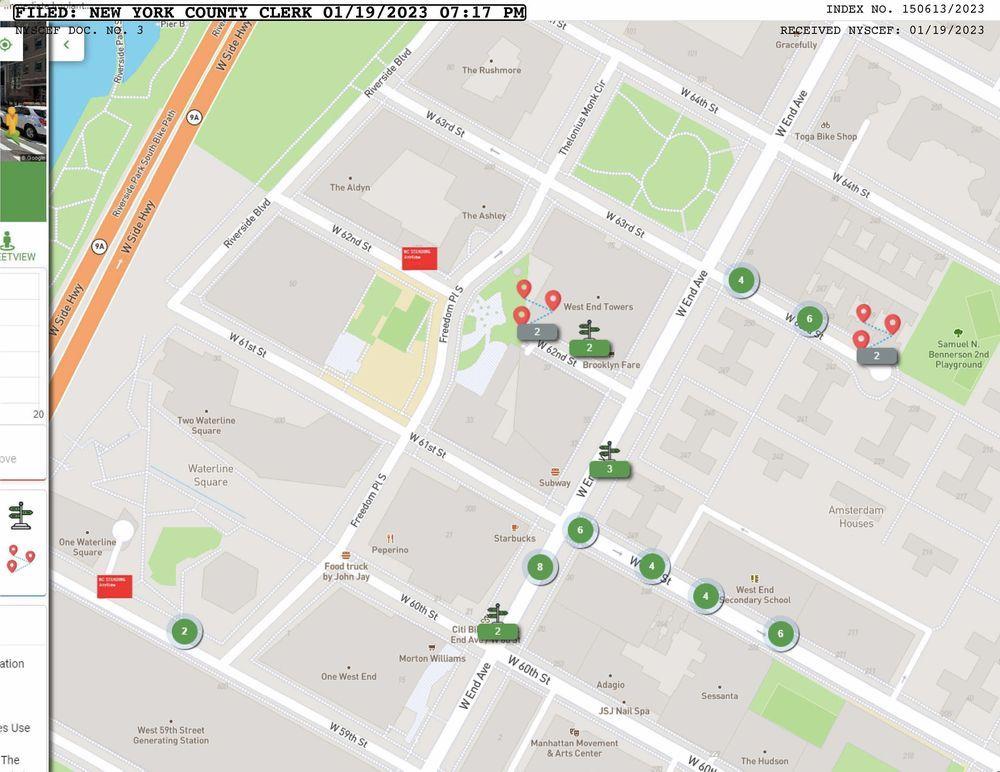 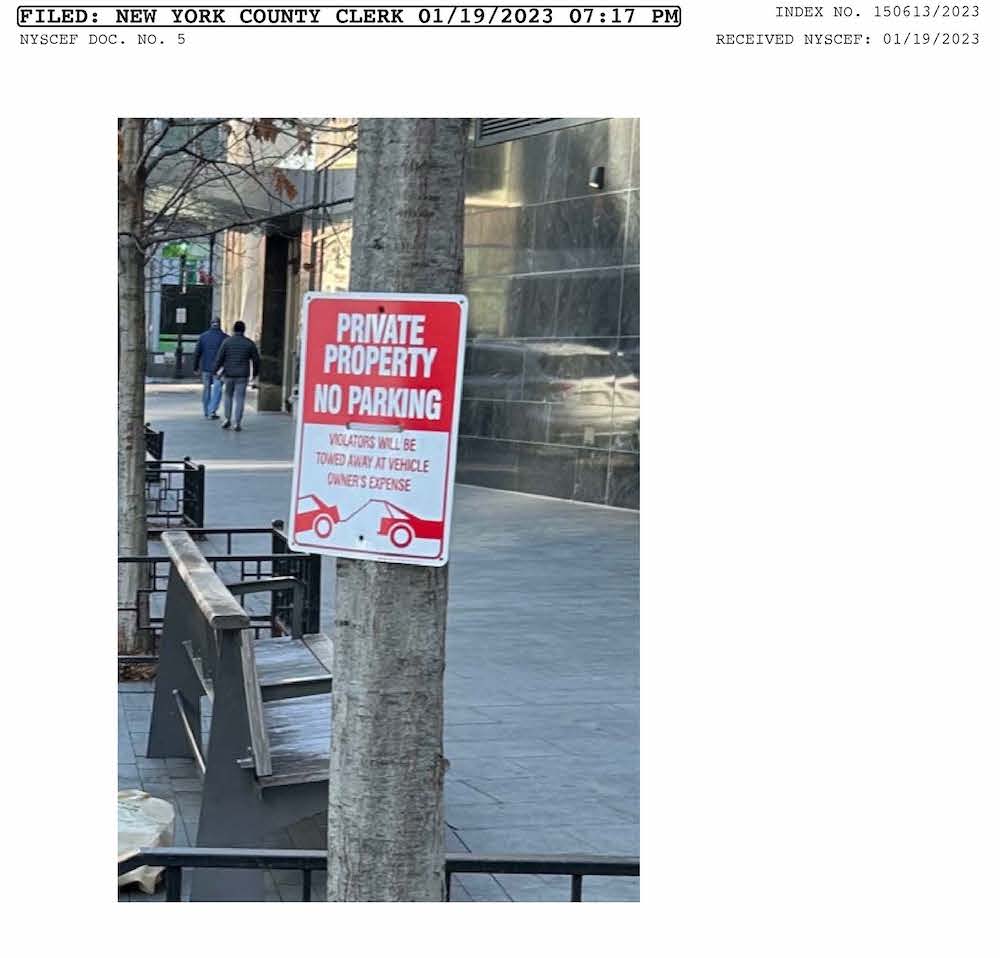 Scott’s vehicle allegedly sits in Coney Island, but she doesn’t know exactly where. The cost to find it and get it back will be $606, according to the Post.

Consequently, the lawsuit alleges that the defendants have failed to comply with the New York City Department of Transportation Traffic Rules and did so by “willfully and intentionally post[ing] counterfeit unauthorized signs on a public street in an attempt to reserve on street parking and to prevent any other vehicle from parking on the street through the placing of the unauthorized sign in the roadway.”

It further alleges that they’ve committed the tort of conversion by taking her vehicle and “extorting payment for the return of the property,” inflicted emotional distress on Scott, and are in criminal possession of stolen property.

Scott is seeking the immediate return of her Audi. If not returned, she is seeking $50,000 or the value of the vehicle including interest, penalties, and liquidated damages. She also wants the court to order the defendants to remove the signs, pay for the cost of a daily replacement vehicle, award an underdetermined monetary value for the infliction of emotional distress, and to cease and desist from declaring the street as its private property.

“They are terrorizing their neighbors, intermittently towing cars to Coney Island, where the neighbors are extorted excessively high rates to retrieve their cars and aggressively arguing with neighbors over parking spaces on the street,” Scott wrote in an email to ILTUWS. “After I filed my lawsuit, they began to put notices that they plan to boot their neighbors on [sic] cars.”

She also says 21 West End Avenue Apartments is claiming ownership of 60th Street between West End Avenue and Freedom Place South, and tells us this is not just a single-building issue.

We’ve reached out to 21 West End Avenue for comment.

Looking Out With A Camera

Removing and Replacing the Roosevelt Statue