In less than three weeks time, the ninety-third annual Macy’s Thanksgiving Day Parade will officially kick off the holiday season in New York City, with the festivities starting on Thursday, November 28th at 9am.

Since 1927, the Parade’s inflatable balloons have become a highlight of the event because they are rendered in the likeness of the world’s favorite fictional characters.

Macy’s 2020 Thanksgiving Day Parade to be Televised Only

In this article, I’m discussing the balloons in order of their scheduled line up for this year’s parade which will include three new character balloons: Astronaut Snoopy by Peanuts Worldwide, Green Eggs and Ham by Netflix, and SpongeBob SquarePants & Gary by Nickelodeon.

Tom Turkey is the oldest, most recurring, and the most famous float in the Macy’s Thanksgiving Day Parade, and the Parade’s unofficial mascot. He generally leads the parade as the first float. 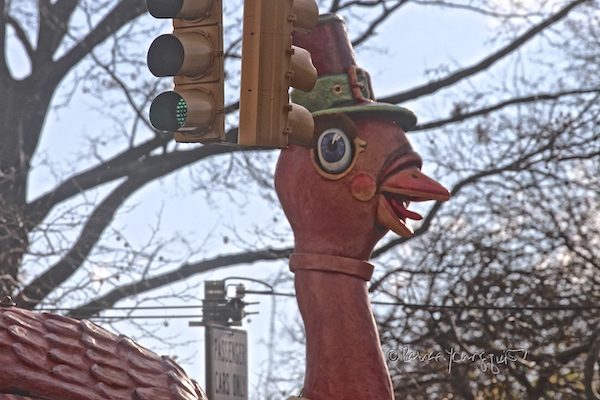 Tom is usually followed by a given year’s character balloon leader which in this case will be Smokey Bear. He is returning to mark his 75th birthday. Smokey first appeared in the Macy’s Parade in 1966 alongside Superman.

Another returning characters include Diary of A Wimpy Kid (Gregory “Greg” Heffley, the American middle school student and the main protagonist of the Diary Of A Wimpy Kid series).

Greg’s first balloon appeared in 2010, to help promote the newest book in the series. That particular balloon featured him clutching his prized diary as he meandered down the streets of New York in his signature black-and-white color scheme.

In 2014, he had a hard time staying above the crowds of people who came to see him due to high wind conditions. However, Upper West Siders and their guests got to see him up close and personal from the vantage point of being on the street they live on. 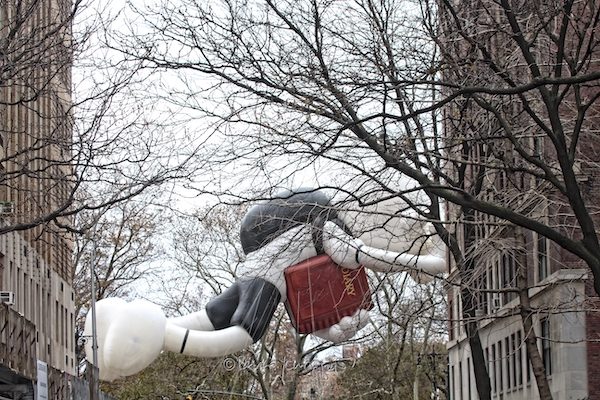 This balloon was retired after the 2015 Parade. However, the character came back in the form of a new balloon in 2016. This time he nearly broke his nose upon bumping into a street lamp alongside CPW. 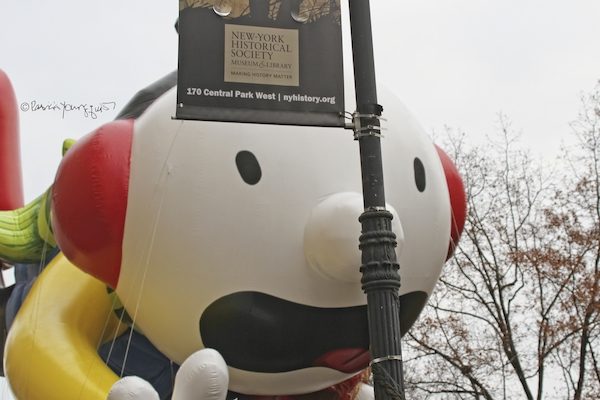 Sinclair Oil’s DINO will also return this year. He is the mascot for Sinclair Oil Corporation and made his Parade debut in 1963, alongside Elsie the Cow, to promote the 1964 New York World’s Fair and its Dino-land attraction.

Dino made fourteen consecutive appearances until finally retiring in 1976, the same year the Sinclair Oil headquarters relocated to Wyoming. The balloon had a retirement party on November 10th, 1977, at the American Museum of Natural History, then after a leave absence (lasting almost forty years), Sinclair Oil partnered with Macy’s to produce a brand-new DINO balloon, just in time for the company’s one-hundredth anniversary the following year (2017). 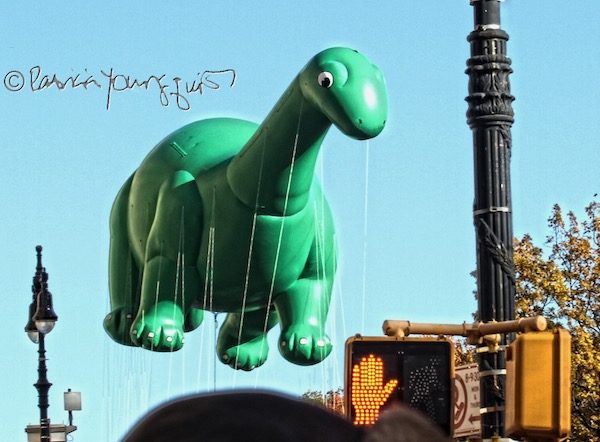 The Elf on the Shelf (known as Chippy) will also be a part of the 2019 Macy’s Parade. He made his Macy’s parade debut in 2012, and he is featured in the classic sitting pose normally associated with the small plush elf.

I was fortunate enough to see him the first year he “marched” in the Parade as he approached The Majestic (apartment building). 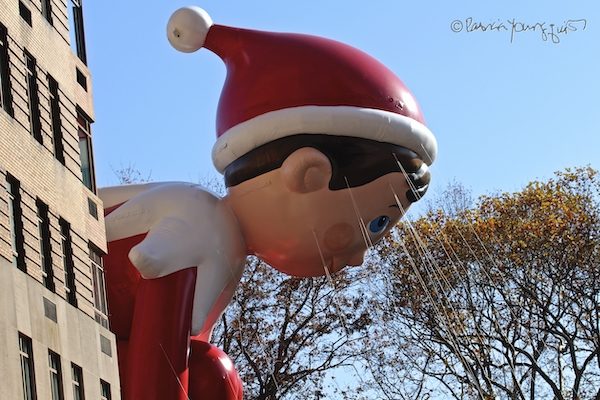 He is currently the oldest balloon still in use for the Parade, having made eight appearances as of 2019.

Another returning balloon will be Goku who made his debut last year. The biggest difference between Goku and any other character is that he is rendered with uncanny human likeness. But alas, I have no photos of him, for it was one of the coldest Thanksgivings on record, and I did not attend that parade.

I’m giving him a nod in my article so that you can keep your eye out for him, dear reader.

Dr. Seuss’s, character, The Grinch (from his most recent animated feature film), will also be in attendance. In 2017, after a fifteen year hiatus from the main Parade, the Grinch returned in the form of a giant balloon, in order to promote the release of Illumination Animation’s “How the Grinch Stole Christmas” the following year. The representation shows him quickly scurrying away after a successful night of stealing Whoville’s Christmas.

He carries a large red sack on his back, which contains a candy cane, presents, and his beloved pet dog, Max. 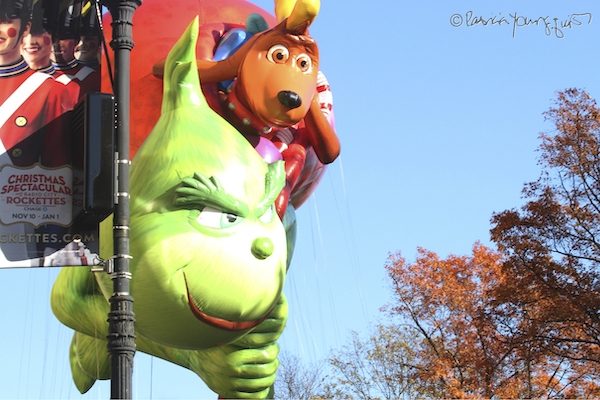 Jett by Super Wings is also scheduled to be here. Jett is the main protagonist of the South-Korean animated series, Super Wing.

In 2017, everyone’s favorite robot-plane, Jett, reached extraordinary new heights as he took on a new form transforming into a giant character helium balloon in the Macy’s Thanksgiving Day Parade.

Jett became the widest balloon in that year’s Parade, with a wingspan of thirty-nine feet, a record which the balloon still holds. The balloon is also known for being the shortest giant helium balloon that is still in use today, standing at only thirty-one feet tall. 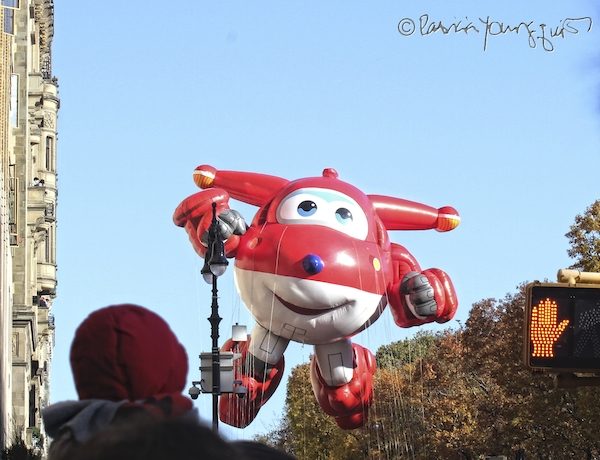 Olaf from Disney’s “Frozen Two,” will also be “marching” in the event. He made his Macy’s Parade debut in 2017, in the form of a sixty-foot tall giant helium balloon. The balloon was designed by Chris Buck, one of the directors of “Frozen.”

PAW Patrol’s Chase is also in this year’s line-up. In the early months of 2017, the Macy’s Parade Studio team worked in conjunction with Spin Master and Nickelodeon to help design and create a brand-new Chase balloon.

It features Chase running down the Parade route wearing his Pup Pack, his searchlight on his right, and his net launcher on the left, showing that “no job is too big, no pup is too small.”

Chase returned to the Parade in 2018, where he was chosen to be the lead balloon.

Pikachu will also be back! Pikachu was introduced to the Macy’s Thanksgiving Day Parade in 2001, its 75th anniversary.

This balloon has under gone a few renditions to get to the physical look that he has in this year’s parade, where he will be sporting a stylish red-and-green scarf while carrying a miniature snowman as he did in 2017. 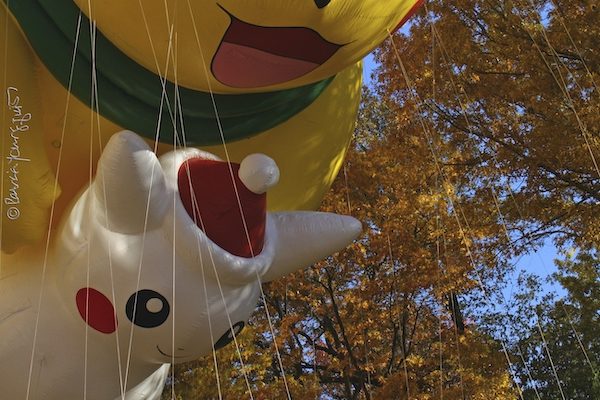 The Pillsbury Doughboy is coming back too! He made his parade debut in 2009, wearing his bakers hat and handkerchief. He appeared from 2009 to 2013, after which he was put into retirement.

In 2014, the Parade Studio Team was commissioned by General Mills to produce a new Doughboy balloon. Evidently an executive was somewhat disappointed with this commission, as the previous balloon’s design was near perfection. However, General Mills agreed to use the exact same design as the previous balloon, leading to the common misconception that the Parade used the original balloon from 2009.

I saw The Pillsbury Doughboy in 2014 and was awestruck by what a voyeur he could be, showing no shame as he peered into the window of a luxury building on the UWS.

The Red Mighty Morphin Power Ranger (a.k.a Jason Lee Scott) who is a fictional major character in the Power Rangers franchise, played by actor Austin St. John, will be here too.

The Red Mighty Morphin Power Ranger made his debut in the 2014 Parade, and was based on the perhaps most popular Power Ranger design. He is seventy-seven feet long, making him the balloon that holds the record for the longest balloon in the Parade. 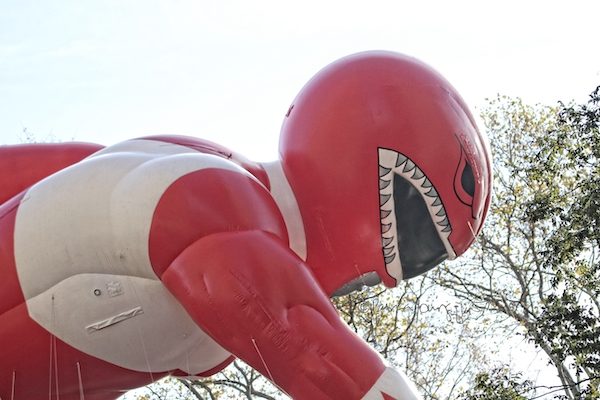 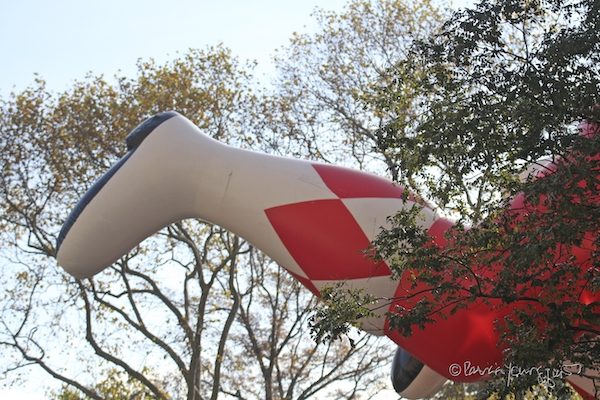 Ronald McDonald is back too and he is a character balloon who has had a number of make overs! With Ronald’s redesign in the mid-2010’s, the Ronald McDonald balloon in the Parade would needed to keep up with him.

Therefore, in 2015, the fourth and current version of Ronald was introduced. Much like the 2000 Ronald Balloon, this version is very basic, with Ronald sporting a red-and-yellow tuxedo, a red-and-white striped shirt, and as always, his iconic big red shoes, which measure in at over six feet long. 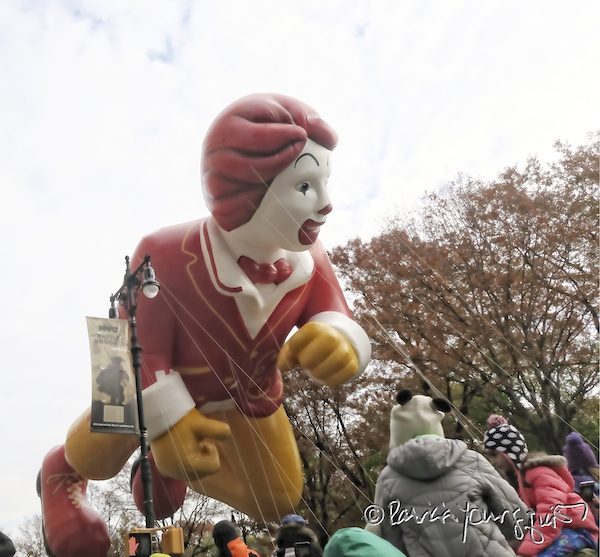 Additionally, The Trolls will be here again. They made their Parade debut in 2016 and their characters can be found in a 2016 American 3D computer-animated musical film based on the Troll dolls created by Thomas Dam. The film was directed by Mike Mitchell and co-directed by Walt Dohrn, written by Jonathan Aibel and Glenn Berger and based on a story by Erica Rivinoja. 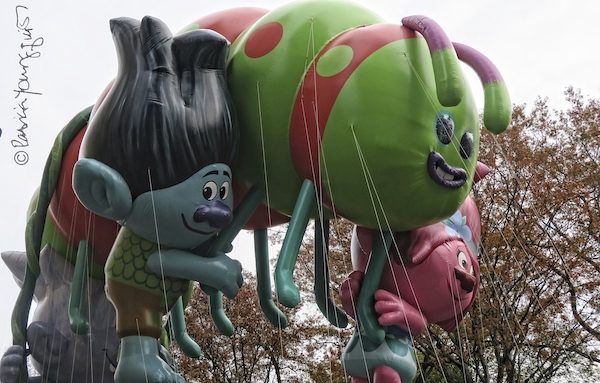 As always, Novelty Balloons will “march” with the aforementioned character balloons. This year there will be eleven of them, including Wiggle Worm (for its fourth time and first time since 2016).

Wiggle Worm returned in 2004 with a new, more modern look. This version of the balloon appeared until 2010 after an accident occurred with it. He once again appeared in 2012, which is when I first saw him as he made his way past The Majestic on CPW, heading south but pausing to peer into an apartment building window as many balloons seem to do.

In 2014, however, a new Wiggle Worm balloon was introduced. It was nearly similar to the previous balloon, but with a face that seemed to fade from a teal to a cyan color. This balloon appeared until 2016, when it was retired. 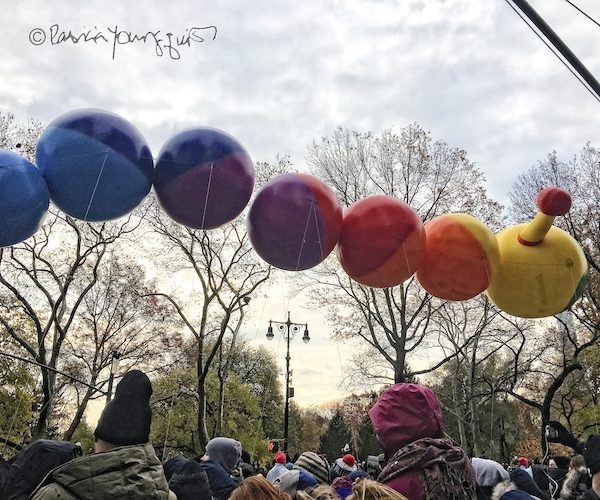 Another novelty balloon who will return this year is Harold the Fireman, marking his tenth run in the parade but his first since 2017.

Harold is a re-creation of the Fireman balloon that only appeared once in 1948 and made his debut in the 1996 Macy’s Thanksgiving Day Parade, as the Parade’s first vintage balloon recreation.

The name “Harold” is a reference to Herald Square, the location of the famed Macy’s flagship store and the camera location for the NBC telecast.

In 2001, the star emblem on Harold’s hat was briefly replaced by an FDNY symbol, to remember the September Eleventh firemen heroes both living and deceased.

The balloon became a Parade favorite, having appeared in every Parade since his debut until the 2008 Parade, when a duplicate of the balloon was created the following year due to the wear and tear on the original one.

After the 2017 Parade, which is when I last saw him, Harold the Fireman was pulled out of the line up to rest. 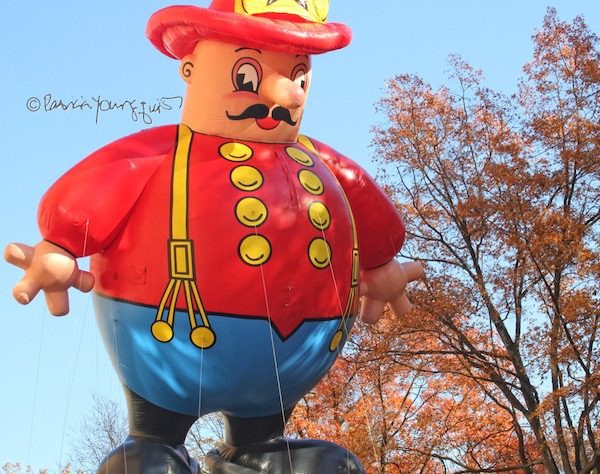 This was a rest Harold surely needed as he had made made twenty-two consecutive appearances. I had been fortunate enough to catch him in 2016.

And there you have it, a glimpse into what you might anticipate (behavior wise) from returning Macy’s characters and novelty balloons at this year’s parade.

As you may know, this event always ends with someone dressed as Santa riding on a float and waving to the crowds. Since that person changes from year to year I’ll end my pre-parade coverage with a Santa-themed Macy’s balloon but not without wishing you well, as you make your Thanksgiving Parade watching plans.

Chanukah on Ice NYC is Back at Wollman Rink!