Magnolia Bakery, the spot that originally opened in 1996 on Bleecker Street and began making cupcakes using leftover cake batter, often gets credited with igniting the “cupcake craze” of the ’90s. While others came and went, most notably Crumbs Bake Shop, Magnolia has continued to expand with more than 25 locations across the U.S. and abroad.

This sweet success got the attention of Stephen Ross, a key figure in the Hudson Yards development. Ross is the chairman of real estate development firm The Related Companies – and the co-founder of venture capital firm RSE Ventures, which acquired Magnolia earlier this year, the WSJ reports. The price of the acquisition was not disclosed. RSE Ventures also has a stake in food brands Momofuku and Milk Bar, which both have locations on the Upper West Side.


“I’ve just been amazed watching this brand,” said Matt Higgins, Ross’ co-founder at RSE. Magnolia’s e-commerce businesses exploded during the pandemic, with online sales almost tripling in 2020, according to the company. Higgins also floated the idea of bringing Magnolia packaged goods to grocery stores, similar to what Upper West Side favorite Levain Bakery did after its acquisition in 2018, making its cookies available in Whole Food’s.

Magnolia has had its fair share of pop culture accolades over the years, being featured on “Sex and the City,” “Saturday Night Live,” and films including Prime and The Devil Wears Prada starring Meryl Streep and Anne Hathaway.

Steve Abrams, Magnolia’s owner, told the WSJ that the decision to sell was driven in part by the challenges of trying to expand the brand without significant additional capital. “There was a lot of money needed that we didn’t have,” said Abrams.

Higgins and Lloyd say they aren’t concerned that the cupcake craze has passed its peak, noting that Magnolia has long touted a broad line of products and has put a special emphasis in recent years on its banana pudding (and unique limited-edition spins on the classic offering – my favorite being the Billionaire Banana Pudding they did with Monopoly). 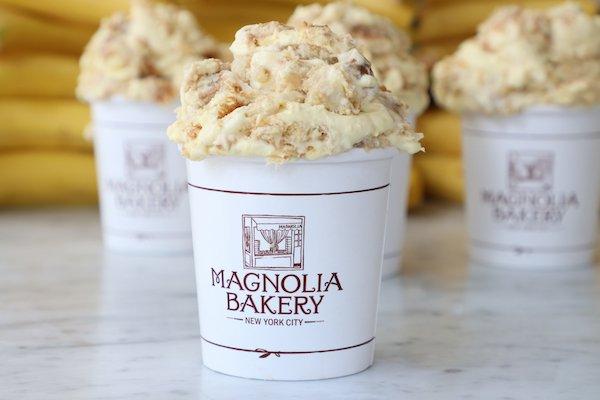 In April, Magnolia announced the opening of a new location at 1794 Broadway between 58th and 59th Streets. This has done little, however, to shorten the line at the shop on 69th and Columbus Ave, which sometimes stretches around the corner and down the street. It appears Magnolia has emerged as a cornerstone local favorite and tourist destination wherever it stands … for now.

The Best Jelly Donuts For Hanukkah: Reviews From A Toddler & An Adult