“History, despite its wrenching pain, cannot be unlived, but if faced with courage, need not be lived again.” Set by her own example, Maya Angelou’s poem On the Pulse of Morning encouraged all who came upon it to take each new day and “mold it into the shape of your most private need.” It was Angelou’s own history, pained but triumphantly courageous, that she used to inspire generations worldwide. 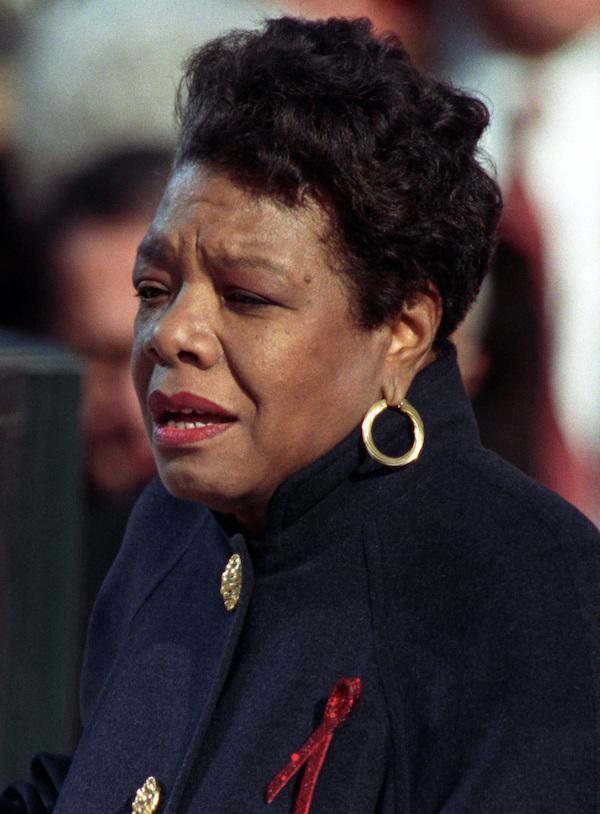 Maya Angelou reciting her poem “On the Pulse of Morning” at President Bill Clinton’s inauguration in 1993: via Clinton Library, Public domain via Wikimedia Commons

It would be nearly impossible to fully capture all of Angelou’s life and achievements in the span of this piece. It was a remarkable life that took her from her birth as Marguerite Annie Johnson in St. Louis in 1928 to her formative years in the deeply segregated and racist southern city of Stamps, Arkansas, before heading to San Francisco where she attended high school, studied dance, and became the first black female street car conductor. She would later move across the world and work as a journalist in both Cairo and Ghana in the early 1960s before returning again as a civil rights activist to the United States in 1964. But it was New York, including the Upper West Side, where her literary contributions would bloom worldwide.

While the world would come to know Angelou’s name in 1969, with the publication of her autobiography I know Why the Caged Bird Sings, there was a six-year period a few decades earlier when the Pulitzer Prize nominee’s future impact on the world was in great jeopardy.

As she recounts in her book, Maya was sexually abused and raped by her mother’s boyfriend when she was seven years old. She courageously disclosed this information to her family and then to law enforcement officials. But she would blame herself when the rapist was kicked to death after he was convicted and released. “My voice killed that man.” Maya did not speak for six years because she feared her words would bring further pain or worse.

But it was the kindness of her friend Bertha Flowers that coaxed her out of silence and ultimately gave rise to some of this country’s greatest works. Flowers introduced Angelou to the words of Shakespeare, Dickens, and Poe – powerhouses that she would join in the pantheon of literary giants – and for the first time in her life, she “heard poetry.”

Soon after, the three-time Grammy Award winner found her own voice and began to chart her course in life as a poet, writer, dancer, singer, actor, director, and activist. Angelou spent brief periods of time in New York in both 1951 and 1954. But in 1958, she moved to New York and shared an apartment with long-time Upper West Sider Rosa Guy, “one of the 20th century’s most distinguished writers for young adults.”

In 1959, Angelou moved to Park West Village at 788 Columbus Avenue, where she lived with her son for a few years. While living there, the future bestselling author joined the Harlem Writer’s Guild and grew her friendship with one of the twentieth century’s greatest writers and playwrights, James Baldwin.

On April 4, 1968, Angelou was celebrating her 40th birthday at her Central Park West apartment when she learned of the assassination of her close friend and civil rights revolutionary Martin Luther King, Jr. Months later, while still mourning King’s death, it was Baldwin’s reverse psychology that led to Angelou authoring I know Why the Caged Bird Sings, the first of seven autobiographies and the start of her literary career.

Angelou would later live on Riverside Drive and, as the NYT reported, the future Presidential Medal of Freedom awardee spent many nights with Baldwin and friends from the Harlem Writers Guild at Mikell’s, the UWS jazz club on 97th Street and Columbus Avenue. Angelou lived for more than two years at 473 West End Avenue before she ultimately moved from the area to a brownstone on 120th Street in Harlem in 2004.

It appears that New York, and the Upper West Side in particular, left its mark on Angelou. And when she passed away in 2014, she was sure to leave her mark on the neighborhood and the city. The NY Daily News reported that she gifted six New Yorkers through her will, two with ties to the UWS. Valerie Simpson, co-owner of Ashford & Simpson’s Sugar Bar (254 West 72nd Street) and Sugar Bar employee Altavise Alston both received “personal tangible property” from Angelou.

There were plans to bring a solo show about Angelou’s life to Broadway. It seems, sadly, with the future of the Great White Way uncertain due to the pandemic, so too are the plans for this project. However, Angelou’s life’s work permanently resides in New York. In 2010, four years before Angelou passed away, the Schomburg Center acquired the poet laureate’s “treasure trove of rare, never-before-seen personal and professional papers, from yellow notepads to original draft pages, the wealth of which span her writing career” – including personal correspondences with Baldwin, Malcolm X, and Coretta Scott King, as well as “manuscripts for unpublished work and dozens of poems.”

Angelou triumphed over her pained history and will surely serve as an inspiration for generations to come. She used her harrowed past to light the way for not just her own success but for those who have followed since. As author Tayari Jones said, “[she] kicked the door open so wide that within her own lifetime there existed younger people who didn’t quite remember that there was ever a door there at all.”

“I’ve learned that you shouldn’t go through life with a catcher’s mitt on both hands; you need to be able to throw something back,” Angelou said. I, for one, am forever glad that she threw something back … for all of us.