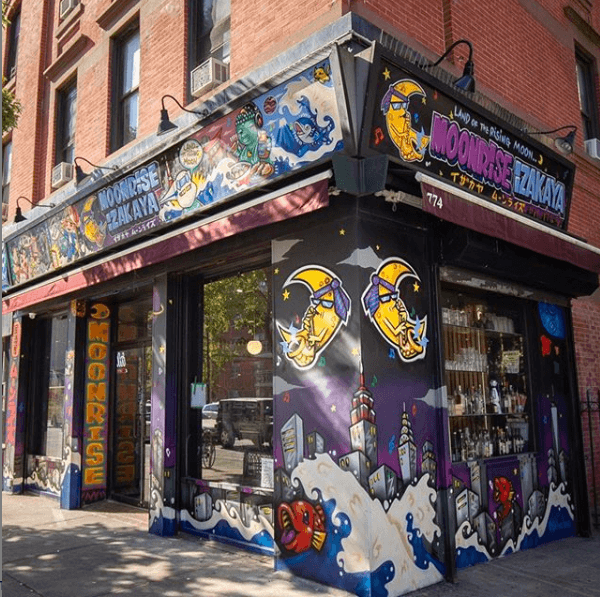 Beloved by locals for its funky decor and killer happy hour deals, Moonrise Izakaya is serving its last sake shots on Saturday, November 12.

A welcome addition from owner Jake Poznak, Moonrise quickly became known for colorful cartoon murals by Shiro, an artist whose work combines a “Japanese aesthetic and old-school New York graffiti art.” The over-the-top exterior may have been the initial draw, but guests returned time and time again for karaoke, trivia and deep discounts.

In terms of food, casual grub like Cheesy Corn and Pork Belly Bao Buns reigned supreme, while the diverse cocktail list honored uptown pop culture with drinks including the “Bodega Cat” and “Spanish Harlem Mona Lisa.” There was even a Bottle Keep program, which allowed loyal customers to purchase a bottle of shochu and stash it behind the bar between visits.

The eatery announced its closure via Instagram this past Thursday, promising patrons a potential new project in the future — and noting its final farewell party will be held on Saturday. Devastated diners flooded the comments section with shock and well-wishes. “Moonrise Izakaya is going to go down as the single most influential restaurant in my life,” wrote one sad person.

Opening mere months before the pandemic ravaged the hospitality industry left its mark on the business, where former Mayor de Blasio signed an executive order to assist small business owners in February 2021. Hizzoner was as enamored as any regular, dubbing it “the most exotic executive order signing place.”

The neighborhood will clearly miss you, Moonrise.