Eagle Court, located at 215 West 84th Street between Broadway and Columbus Avenues, has been purchased by developer Naftali Group; according to Commercial Observer, the purchase price was $71 million. We recently reported that Books of Wonder – located in the ground floor retail space of the building – would be closing by the end of June, as Naftali Group wanted a vacant building ready to be remodeled. We also reported in May that the new owner will not be renewing any of the apartment leases.

Eagle Court’s website notes that the site of the building is where Edgar Allan Poe wrote “The Raven.” Learn More: EDGAR ALLAN POE’S TWO YEARS IN AN UPPER WEST SIDE FARMHOUSE.

Sales have launched at ERA, a new condominium located at 251 West 91st Street at Broadway. The building comes with 57 two-to-five-bedroom apartments, ranging in size from approximately 1,252 to 3,524 square feet and starting at about $2.625 million (and up to $11.25 million for a five-bedroom). The 20 story building features a cantilevered facade and has made some headlines for its amenities, most notably an outdoor rooftop pool.

378 West End Avenue, a new development condo on the Upper West Side developed by Alchemy Properties, just unveiled a mural that “celebrates the pillars of culture and diversity in the neighborhood.” The art installation encompasses a full city block on the building’s construction bridge and was designed by mural artist Vincent Ballentine in collaboration with ArtBridge, a New York City non-profit that works with artists to transform construction sites into art exhibitions.


The piece, which will be available for public viewing until Spring 2022, “honors the legends that lived on the Upper West Side and highlights the importance of arts and culture as we see New York City come back to life.” We first wrote about this building – located at the former site of the Collegiate School – in 2018, when development plans that had been in the works for years changed course. 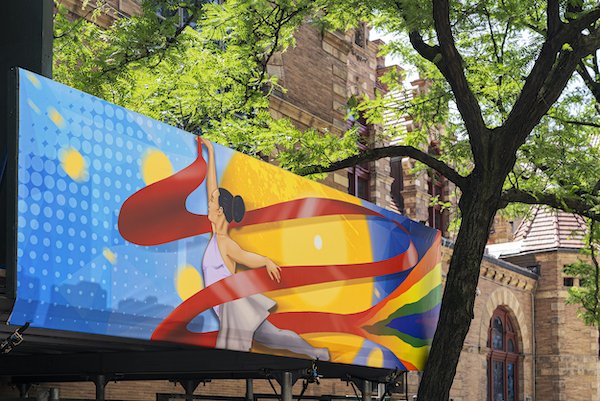 A First Look Inside the Vandewater Residences