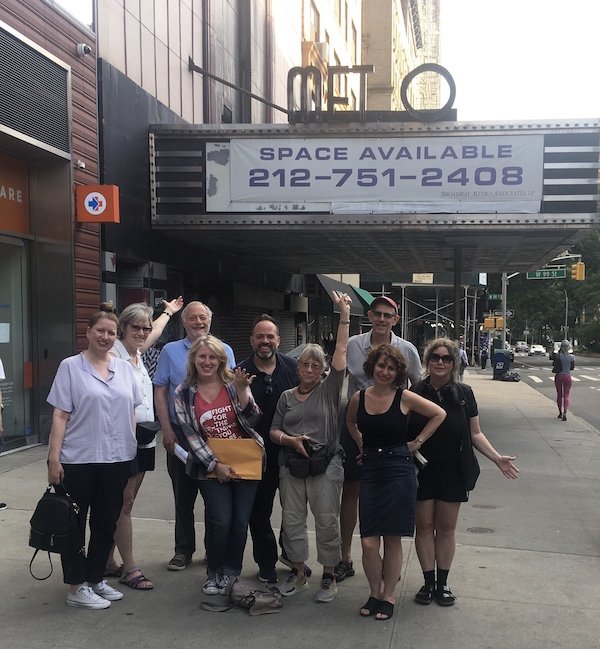 The campaign on change.org – which we first wrote about when it was launched this spring – has reached its goal of collecting 2,021 signatures, and Sumberg has drafted the following letter to Mayor de Blasio to request a meeting.

I am writing to you on behalf of a group of concerned citizens and activists on Manhattan’s Upper West Side. We are reaching out to let you know that the once beautiful and vibrant Metro Theater—originally called the Midtown Theater—now sits gutted and neglected on Broadway between 99th and 100th streets. The iconic and landmarked art-deco theater was designed by the renowned architectural firm of Boak and Paris in 1931. Since 2006, the Metro has sat empty, shuttered and decaying from neglect.
We would hereby like to request a meeting with you and/or your staff to present our Change.org petition which asks for your help in making “something beautiful” happen at 2626 Broadway (the address of the theater). Please schedule time for a small group of us to present the 2,021+ signatures and discuss with you what the Mayor’s Office can do to help transform this long vacant, privately owned space into a revitalized gathering place for the community.
There is a palpable need in our neighborhood for a newly imagined multi-use performing arts space that provides the opportunity to laugh, cry, learn and exchange ideas all while being reminded that we are a part of something bigger than ourselves. We are all committed to the idea that—with the right leadership in a public/private partnership–the Metro can be reimagined as a state-of-the-art cinema/performance space that would have a significant economic impact on our neighborhood.

Friends of Metro Theater is working on a website which we’re told should be live soon. They’ve created a public Facebook page which can be viewed here.

In another recent milestone, a Wikipedia page for the Metro Theater has been created with the help of Assembly Member Danny O’Donnell’s office, the Bloomingdale Neighborhood History Group and others.

We wrote about an earlier campaign to save the Metro Theater in 2018.

Medieval Gladiators Have Been Jousting in Central Park