For 65 years, a bronze survivor of Hiroshima has stood tall and strong along Riverside Drive. The statue of Shinran Shonin, dressed in traveling robes and a large, traditional hat, is a quiet symbol of peace outside the New York Buddhist Church.

The statue’s story begins not during World War II but far earlier, in 1173 AD, when Shinran Shonin was born to an aristocratic family in Japan. Upon his parents’ deaths when he was nine years old, Shinran Shonin became a Buddhist monk in an attempt to make sense of the tragedy.  Over his 90-year life, Shonin would write the foundations of Jodo Shinshu, or Shin Buddhism, the most widely practiced form of Buddhism in Japan.

Centuries later, Hozen Seki, a Japanese Jodo Shinshu minister, immigrated to the United States with plans to work in a Buddhist church in Los Angeles. While working in California, Seki soon helped to start another Buddhist church in Arizona. Despite his success on the West Coast, Seki learned of the opportunity for a Buddhist Church in New York City and in 1938, he flew across the country in an open-cockpit airplane. The New York Buddhist Church has been an Upper West Side presence since, although it initially started in a brownstone on 94th Street between Amsterdam and Columbus Avenues.

Following the Japanese attack on Pearl Harbor in 1941, Hozen Seki was arrested and brought to an internment camp for Japanese-Americans, where he would spend the remainder of the war.  Despite going without its founder for four years, Seki’s wife, Satomi, along with members of the community, helped keep the church afloat during the war. Upon Seki’s return, the church quickly outgrew its original location, prompting the community to move to its current home in a townhouse at 332 Riverside Drive (between 105th and 106th Streets). 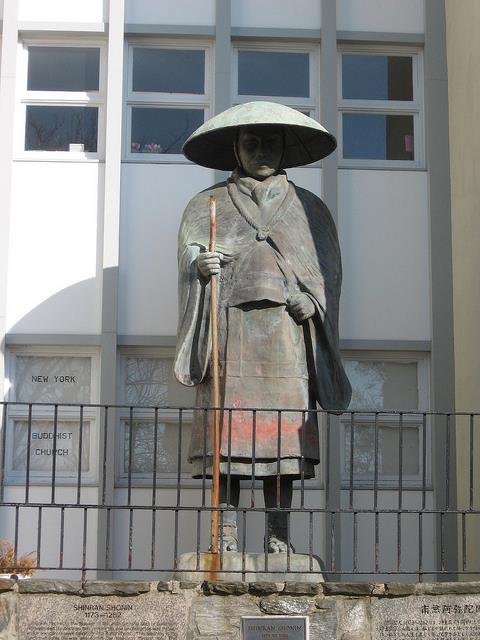 While the New York Buddhist Church was planting its roots on the Upper West Side, the statue of Shinran Shonin was just beginning its story in Japan. Seiichi Hirose, a Japanese businessman in the metal industry, turned to Jodo Shinshu Buddhism following the death of his son. In 1937, he used his factories to forge six identical bronze statues of Shinran Shonin. The statues were spread across Japan, with one standing on top of a hill overlooking Hiroshima.

During the war, the Japanese military confiscated three of the statues to be scrapped for ammunition manufacturing. A similar attempt was made in Hiroshima but after significant protests over the importance of the statue, the government allowed Shinran Shonin to remain on his hilltop.  It was from the hilltop that, on August 6th, 1945, the statue witnessed the destruction of Hiroshima when the first atomic bomb exploded over the city.  Although the epicenter of the blast was just 1.5 miles away, the statue somehow survived.

In 1955, Hirose and Seki decided the statue should make the journey across the Pacific to New York. Both men understood the powerful symbolism of the statue and hoped its message of peace would spread from New York across the globe. Hirose believe the statue carried both his own and Shinran Shonin’s anti-war sentiments. While the statue was in transit, Hirose wrote to Seki to note his joy at the statue’s new location in New York, and thanked Seki for preparing an opening ceremony. The statue of Shinran Shonin was unveiled in the front garden of the New York Buddhist Church, where it remains today. A carved stone plaque along the sidewalk describes the statue as “a testimonial to the to the atomic bomb devastation and a symbol of lasting hope for world peace.”

Learn more about the New York Buddhist Church on their website.

Check out our history archives.

And get the UWS newsletter!
Related Posts

Premier Chess Group Class on the Upper West Side