OneBlock UWS was launched about two months ago to address the trash issue on the UWS. The group now has over 1,200 Facebook followers, and more importantly, over 500 volunteers who have claimed individual blocks which they’ve agreed to keep clean.

Approximately 98% of volunteers have taken streets along the avenues to clean up, as these are the streets which have been hit the hardest with litter.

In addition to having individual volunteers claim specific blocks, the group has been organizing weekend cleanups which anyone can sign up for.

Link in bio to sign up for tomorrow! IF YOU WANT TO HELP THIS SATURDAY or simply meet your neighbors to connect for future clean up efforts, please just meet us at the staggered times and designated areas. We can always use the extra hands and we want to help you all connect. TO GET OUR NEWSLETTER PLEASE DM me the block you live on and your email. IF the volunteer spot/street you want is taken for Saturday, look for one that’s not and/or just come to a designated time anyway. We will give you garbage bags, ONE BLOCK hats, ONE BLOCK Tee-shirts and some gloves. SIGN UP: volunteersignup.org/HPPC4

OneBlock has also started a new program through which they have employed three formerly homeless men with ACE New York to pick up trash and keep the trash cans from overflowing along Columbus, Amsterdam, and Broadway. These men are now receiving a full set of services through ACE including a 401k and healthcare. 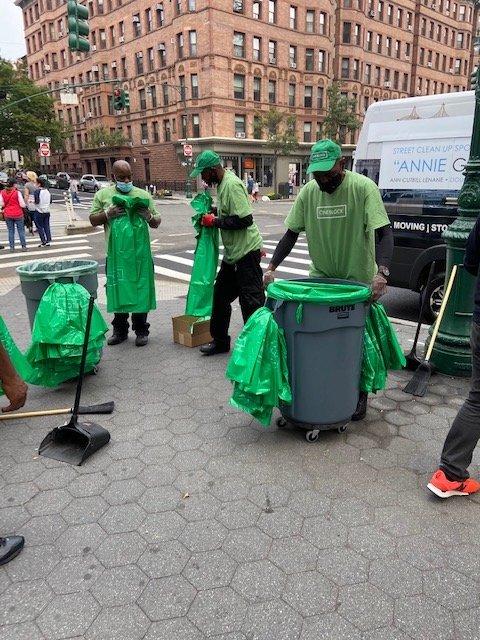 The group was founded by Ann Cutbill Lenane and Jake Russell. Lenane has sponsored the first month (covering the expenses of the three employees), and the group will soon announce a fundraiser to keep them operating for months down the line.

OneBlock UWS’ goal is to make this a long term program, both so that the men in the program have stable employment, and so that the neighborhood and businesses get continued support. The upcoming fundraiser will ask people to set up a recurring donations to keep the program stable.