Home
Community
Paul Sorvino Dies at 83; He was a Regular at the Original Amsterdam Billiards

Brooklyn-born actor Paul Sorvino — who will perhaps be remembered most for his role as Paulie Cicero in Goodfellas — passed away on Monday at the age of 83.

Soon after we heard the sad news, we learned that Sorvino had an interesting connection to the neighborhood: he was a regular at the original Amsterdam Billiards on 76th and Amsterdam Ave.

The original Amsterdam Billiards “opened in March 1990 and closed 16 years later (in December 2006) because a developer bought the building and demolished it in order to build a new high rise condominium,” according to the pool hall’s Facebook page. (The new condo being referenced would be The Harrison, located at 205 West 76th Street.)

“GONE – along with the whole building to make room for… wait for it… MORE F-ING CONDOS!!!” wrote Ted S. in a May 2007 Yelp review of Amsterdam Billiards after its closing. “The city is always changing but don’t the last few years of glass tower spendy condo expansion seem excessive? I saw Jerry Seinfeld playing Larry David here, Paul Sorvino and Jeanette Lee as well. Good high school memories. Oh well.”

Here’s Sorvino with Jerry Orbach at a private event in the late 1990s, while Amsterdam Billiards was still at its original location. 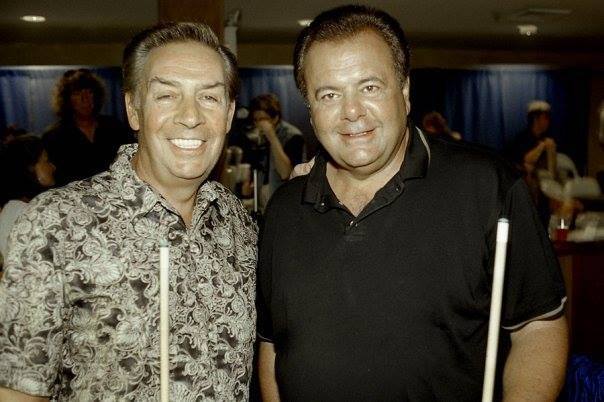 With the news of Sorvino’s passing trending on Twitter, some users of the platform shared their memories of the late actor at the former UWS staple.

@RobAbramowitz wrote, “He used to play at the #Amsterdam Billiard Hall on the Upper West Side. Saw him there all the time (I played in a league and practiced daily) and he seemed as cool and normal as could be. Rest in Peace.”

And @croninwhocares wrote, “Rest in peace Paul “Sidepockets” Sorvino. (Remember Amsterdam Billiards on the Upper West Side? He was a part owner and damn good at pool. Very good actor too.)”

Amsterdam Billiards owner Greg Hunt tells us Sorvino was never a part-owner; people just assumed he was because he was there so often.

Hunt also confirmed the “Side Pockets” nickname, which he tells us “came from the fact that he was very proficient at ‘pocketing’ balls in the side pockets.”

According to CNN, another tie Sorvino had with the UWS was that he studied at the American Musical and Dramatic Academy at 211 West 61st Street.

And, Sorvino played the role of Samuels in gritty Upper West Side classic The Panic in Needle Park.

Sorvino was a loyal patron of Amsterdam Billiards — now located at 110 East 11th Street — well past the pool hall’s time on the Upper West Side.

Sorvino died of natural causes in the company of his wife, Dee Dee Sorvino. “”Our hearts are broken, there will never be another Paul Sorvino,” she said in a statement.