The way Michael Weinstein, Chairman and CEO of Ark Restaurants, told it to an interviewer producing a 2019 segment for a New-York Historical Society series about business owners on Columbus Avenue, the idea of opening a restaurant was intuitive. It was not well thought out and researched. In the early ’70s, “There was nowhere to eat,” he recalled.

Burgers were what was available in the various bars that lined the streets. The shops that were located along Columbus Avenue sold antiques and liquor. There were some bakeries, pharmacies and hardware stores. But the main shopping corridor was Broadway.

Amsterdam Avenue, he said, was dangerous and gritty. People who wanted a good steak would jump into a cab and head to Midtown, “where the restaurants were.”

So, along came a friend who had a little restaurant experience, whereas Weinstein had none. The friend was eager to open a restaurant on Columbus Avenue. So, in 1975, Weinstein kept his day job and invested with a couple of others, including the man who put in the HVAC and the man who put in the cigarette machine and the jukebox.  The rent for the space at the northwest corner of 77th and Columbus Avenue was about $10,000 per year.

With very little money, they scavenged around for useful items like $1 chairs and invested the rest in the design of a glass greenhouse to enclose the seating area. It was a style that still looks innovative among the outdoor shelters constructed over the past two years. 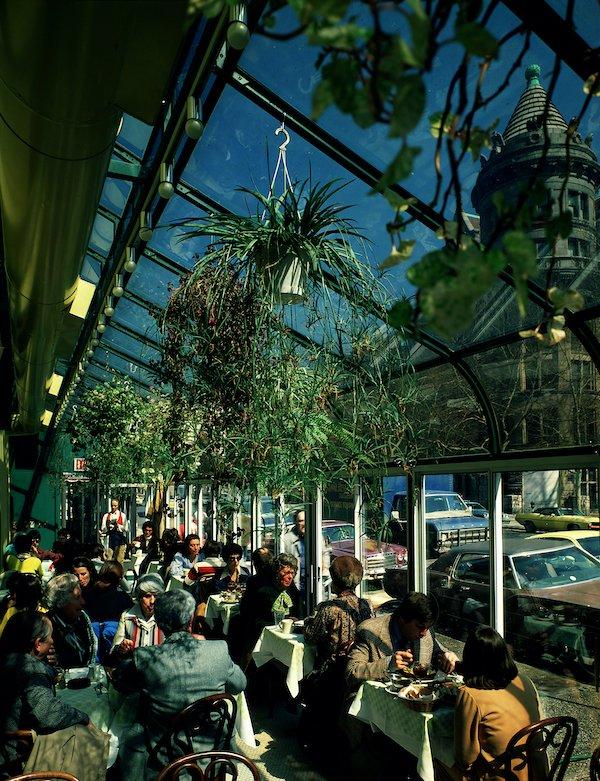 The concept was very clear to Weinstein: he wanted to emphasize a feeling of interaction with the vibrancy of Columbus Avenue, while also offering views of the American Museum of Natural History. This idea of creating a connection to the environment was quite different from the more usual goal of leaving outside world behind. The mood was comfortably casual – customers did not feel pressured to dress up – and in those days, many creatives including Meryl Streep and William Hurt were regulars. “The whole cast of Chorus Line came everyday after the show.” The New York Times reported that among other events held at the Museum Cafe were “parties for Diane Keaton and Richard Dreyfuss when they won Oscars in 1977.”

Architect Ira Grandberg had recently graduated from the Columbia School of Architecture and started his own business, Grandberg & Associates Architects. He was hired to design the Museum Cafe and its showpiece glass outdoor shelter. Grandberg said that “the job led us to designing three more cafes on Columbus and another on Broadway for Weinstein. The Museum Cafe broke ground in setting standards that allowed for the growth of cafes along Columbus and in other parts of the city.”

The Museum Cafe was open until 4am. Weinstein recalls a nice variety of menu items written up on the chalkboard every day. “You could have steak, shad roe or a burger.” While everything about the Museum Cafe seems contemporary, forty years ago, there was nothing like it. They didn’t take reservations and often the wait to be seated took an hour. Weinstein remembers the flow of customers who came in on the eve of Thanksgiving after watching the Macy’s Thanksgiving Day Parade balloons get inflated. A photo was even taken of actor Christopher Reeve dining with a huge balloon of superman behind him.

The Museum Cafe closed in 1998 after 24 years. As CEO of Ark Restaurants, Weinstein became a major restaurateur in NYC and beyond, and started growing bigger restaurants (Bryant Park Grill, Robert, etc). In 2002, the Museum Cafe’s former space became the second of dozens of Shake Shack restaurants. Weinstein said that sometime in the years that followed, he had a conversation with Danny Meyer, owner of Shake Shack, who told him his rent was $440,000 per year. Times change! Cafes and restaurants of all shapes, styles and culinary character have come and gone and proliferated on Columbus Avenue since the days The New York Times and other publications quoted observers who marveled at how the edgy, crime ridden neighborhood had transformed in just a few years.

Looking Out With A Camera