“They don’t eat, don’t sleep
They don’t feed, they don’t seethe
Bare their gums when they moan and squeak”

So sings Eddie Vedder in Pearl Jam’s Rats, a song from its 1993 Vs. album that was seemingly intended to draw a distinction between human beings and order Rodentia. In the frontman’s view, the vermin have the edge: “rats are probably a hell of a lot more admirable.” As a New Yorker who recoils in disgust without fail each time these creatures scurry by, I disagree and wonder if Vedder would change his mind if he bore witness to the infamous 74th Street Rat House.


To be completely candid, even writing this piece is making me shudder, giving me little prickly chills on the back of my neck as fleeting visions of toothy rat faces and slithery rat tails cloud my words. I came across a site promising “8 Interesting Facts about Rats” and could not even bring myself to read it. I did learn that a group of rats is called a mischief and, though for some of us (or even just this party of one) a more menacing name seems necessary, the very thought of even a single one is wreaking havoc in my mind.

Pizza rat be damned, I don’t think I am alone in this. Who amongst us has seen the videos – you know the ones, the rat crawling over a sleeping passenger, or attacking a reporter, or the one filled with the harrowing screams of horrified subway riders – and feels a pang of jealousy or FOMO? Not me! Dare I say, not most of us?

But I digress. See what they make me do! Back to the Rat House …

In September 2012, I came across a homemade sign posted on Amsterdam Avenue between 73rd and 74th Streets announcing a garage sale at 120 West 74th Street, a.k.a. “The Rat House.” Some say curiosity killed the cat, but my curiosity led me to the rat. I bravely decided to check it out. Face your fears, right? 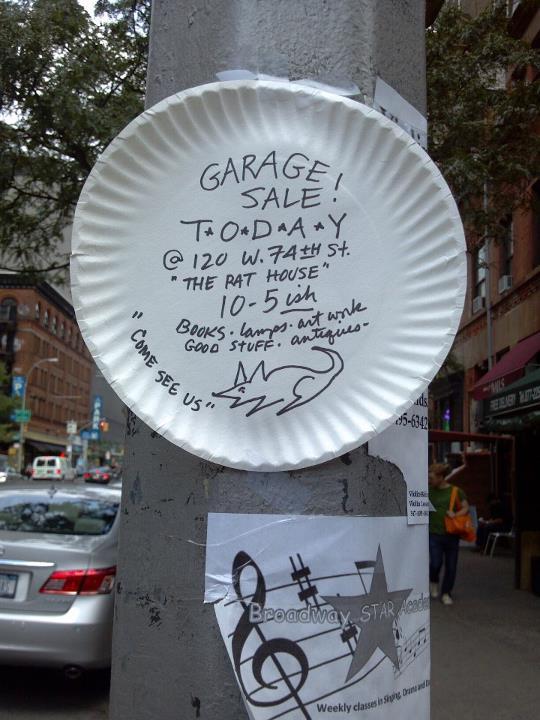 The Upper West Side’s former rat headquarters appeared vacant and ignored. That is to say vacant and ignored except for the large rat contingent that operated a veritable rat circus at all hours of the day. Nightfall only enhanced the unwanted performance with the pests visible in greater numbers and apparent greater urgency as they dashed up and down the steps leading to the building’s sunken front door entrance. They raced to the curb and back again as members of the rodent troop sat perched along the building’s fencing while others crept up and down the rails, some even upside down. I repeat … upside down! And the squeaking. My gawd the squeaking, a haunting chorus straight out of a horror film.


West Side Spirit reported in January 2012 that the building was empty for a few years except for the rats. “The landmarked property used to belong to Walter Tillow, who lived there with his family and is on record in 1988 opposing the historic district designation that eventually did envelop his property. It reportedly sold for almost $4 million to a company called 553 West 174th St LLC-and that company filed for bankruptcy in October 2011.”

Streeteasy shows that a single unit at the 1910 Romanesque Revival was rented for $2,400 in April 2013. The building was reportedly sold in June 2014 and again in 2020. Rat activity was reported on St. Patrick’s Day in 2014, no doubt because the vermin went a bit overboard enjoying the day’s annual festivities. But the home was deemed clear on May 28, 2014 and six times thereafter through May 2, 2019. However, according to Augrented, it seems like the rats may have returned to their old stomping grounds based on rodent inspections on December 20, 2019 and August 19, 2020.

Regardless of whether the 74th Street rat army is planning to re-infiltrate the landmarked townhouse, a reminder of their time on this block remains just down the street. The terra cotta entrance panels of 155 and 157 West 74th Street feature “frolicking rodents.”

Of course, living with the rat population is part of life in the big city and not uncommon to the Upper West Side. The New York Times featured Starsky and Hutch, two UWS rescue dogs that worked as rat hunters along 74th Street in 2006. A rat condo was reported just last April on West 89th Street and “rats as big as bunnies” were seen brazenly roaming the neighborhood in November 2020 in broad daylight.


To fight the battle against the growing rat population, the city offers rat control training, more commonly known as Rat Academy. But perhaps the best vigilance is to take common sense measures. Throw your garbage where it belongs. Report sightings or rat holes to your landlord or to the city. Don’t feed them!

If you’re like me, you might consider the recent advice of an Upper West Side mother and avoid the risk of seeing the vermin altogether. As the sun was setting recently on a playground near West 64th Street, she tried to entice her son to leave. “The rats come out when it’s dark,” she argued. A more persuasive argument has never been made, especially when science tells us how big the rats can grow. Spoiler: they can grow to two pounds versus the average weight of a half-pound. Shudder.