On Thursday night, the Community Board 7 Preservation Committee reviewed an application put forth by the American Museum of Natural History regarding the removal and relocation of the Equestrian Statue of Theodore Roosevelt.

Sam Biederman, the chief of staff and assistant commissioner for community outreach and partnership development at the Parks Department, opened the presentation to the board with an overview and history of the statue.


“The statue is by James Earle Fraser, and it consists of a heroically sized bronze figural group atop a granite pedestal. Roosevelt is depicted on horseback, flanked by a Native American figure and an African figure on foot. The city, in partnership with the museum, is proposing what is a really incredibly rare action here, but we feel it is the right course of action. We are stewards of the city’s collection, a responsibility affirmed by the United States Supreme Court, which in 2009 unanimously supported that a city’s role in determining the appropriate place in question [for such statues], based on the aesthetics, history and local culture,” said Biederman.

It was noted that in the summer of 2020, with the support of the Roosevelt family, Mayor de Blasio directed the removal and relocation of the statue due to the visuals and thematic framework of colonization and racism. This would soon lead to protests against the removal of the statue.

A representative from the museum, Daniel Slippen, stated that the statue was inherently racist and undermines the mission of the museum. He noted multiple examples over the course of recent decades where the statue sustained public controversy. He noted that the statue is only one part of the memorial to President Roosevelt, and the Roosevelt family has also asked that this statue be removed.

“Symbols of systemic racism became even more evident in the wake of the movement for racial justice that emerged after the murder of George Floyd. It become clear that removing this statue would be a symbol of progress toward an inclusive and equitable community,” Slippen said.

Rolondo Kraeher is the architect who presented plans to replace the statue. The entire statue is slated to be removed, and another statue would not replace it. Instead, there would be more stairs and text engraved on the ground. Kraeher said that the design was meant to create a message of openness and availability. 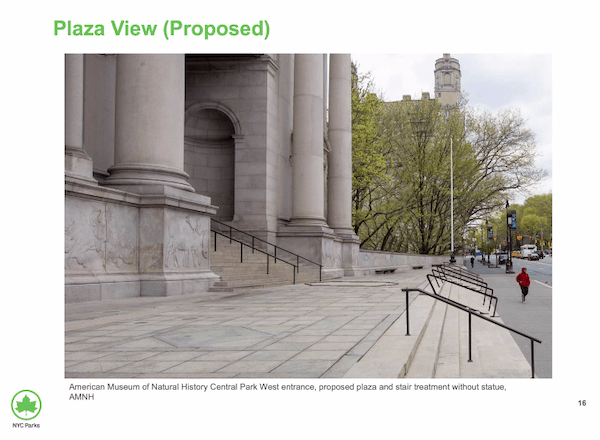 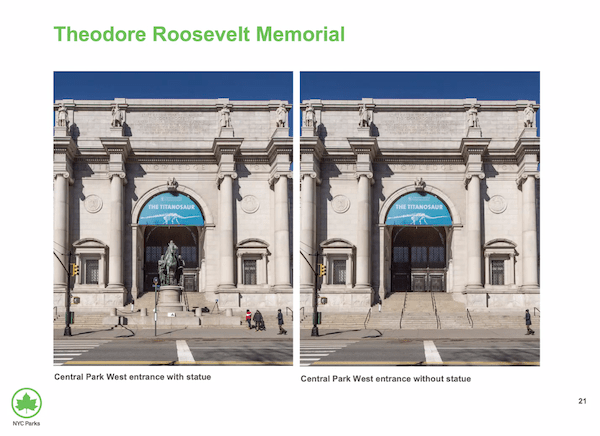 CB7 board member Bill Higgins gave an overview on the thinking behind the proposal and how to frame the question of appropriateness. “This portrayal clearly raises themes of racial superiority and inferiority imperialism, and so many other themes and characteristics associated with that. These have been problematic from the beginning. But, as the decades [went on] they had become intensely more problematic. Especially now, these are really tumultuous times,” Higgins said.


The committee members of CB7 asked questions about where the statue would be relocated and how much moving it would cost. Both questions remained unanswered at this time by city and museum representatives.

There was also a long discussion about the possibility of moving parts of the statue and leaving Roosevelt on his horse. The city and museum representatives said no, and that the entire statue would be removed in its entirety.

One long time board member said “I went to the museum when I was a child, and I brought my children there and I brought my grandchildren there. I’ve always had a problem with the statue of Teddy. I think he was a great president, but I have always had a problem with the Indian on one side and the African American on the other side.”

The committee voted to approve a resolution to remove the statue and approved the presented designs for the existing plaza. The next step in the process is to bring the presentation to CB7’s next full board meeting. Other city agencies including the Public Design Commission, and the Landmarks Preservation Committee, will also need to sign off on the removal and changes before any action can take place.