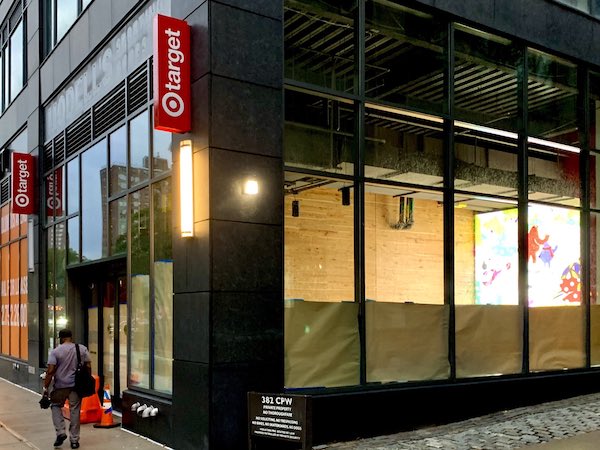 Signage is up and renovations appear to be progressing at the upcoming Target at 795 Columbus Avenue, which is part of the Columbus Square Complex which stretches from 97th to 100th Streets. This “small-format” Target will be replacing former tenant Modell’s, which last year declared bankruptcy, liquidated its stores and was acquired by Retail Ecommerce Ventures which pivoted the retail chain into an online store. Modell’s had another location at 350 Amsterdam Avenue, between 76th and 77th Streets.

We learned last year that Target had signed a 15 year lease with the landlord, Chetrit Group, for a 24,000 square foot space, considerably smaller than the Columbus Circle Target which measures 34,000 square feet (but is also considered “small-format,” as the chain store’s typical space clocks in at 130,000 square feet).

Here’s an early review of the Target in Columbus Circle, if you haven’t yet been.

We’ve reached out to Target’s press department to see if they have a ‘target’ opening date for the Columbus Square location. A spokesperson wrote back to say “Our Upper West Side Target store at 795 Columbus Ave. is planned to open later this summer. We’ll have more details to share as we get closer to opening.” We’ll share the next update we receive, but if you were around for the Columbus Circle store’s updates, you might want to prepare yourself for a big bowl of false alarms.

There also seems to be quite a bit of progress at the eventually opening Bareburger at 2233 Broadway, between 79th and 80th Streets (formerly occupied by Ikinari Steak, which closed after a pretty short run). We were originally told by Bareburger’s marketing director that this location was supposed to open in November 2019. Bareburger also has a location at Columbus Square.

UWS Save Our Stores posted the photo of the space below, and we’ve reached back out to the marketing director, who wrote back to tell us “We are hoping to be near our goal of opening late July/ early August!”

A post shared by UWS Save Our Stores (@uwssos)

UWS Save Our Stores also posted this photo, showing construction work taking place at the former Mughlai Indian Cuisine at 75th and Columbus.

A post shared by UWS Save Our Stores (@uwssos)

The group – which also goes by UWS SOS – was formed to “stop the epidemic of long-term vacant storefronts.” We first wrote about them here, and you can learn more about them at uwssos.org.

We’ll provide updates on the above locations as soon as we learn more!