A July 22 Reuters article, covering the struggle retailers across the country are facing in restocking their shelves for the back-to-school season, was opened with a mention of the Upper West Side’s Stationery and Toy World, located at 125 West 72nd Street between Columbus and Amsterdam Avenues.

Manager Gary Rowe told the publication that his vendors, who are typically reliable, are facing inventory shortages on items including pens, paper and folders – and that prices on items they do have are unusually high.

“I’m hoping that when everything catches up, we get more stock. Business has been really slow,” Rowe told Reuters.

The article cites a number of factors causing these challenges for stores nationwide: “higher production costs, cargo delays from China and other Asian countries, and sky-high shipping rates.”

Quite a few items appear to be out of stock on Stationery and Toy World’s website; for products which are available, the number of units still remaining are listed.

Before the pandemic – but well into the Upper West Side’s long-running retail crisis – Stationery and Toy World teamed up with another small business on the Upper West Side – West Side Kids at 498 Amsterdam Avenue (at 84th Street) – to refer customers to one another. The strategy was for the store’s owners to contact one another if a customer couldn’t find what they were looking for.


At the time, Stationery and Toy World’s owner, Donna Schofeld, said “We work together to stay alive, because it’s becoming very challenging with the internet.” 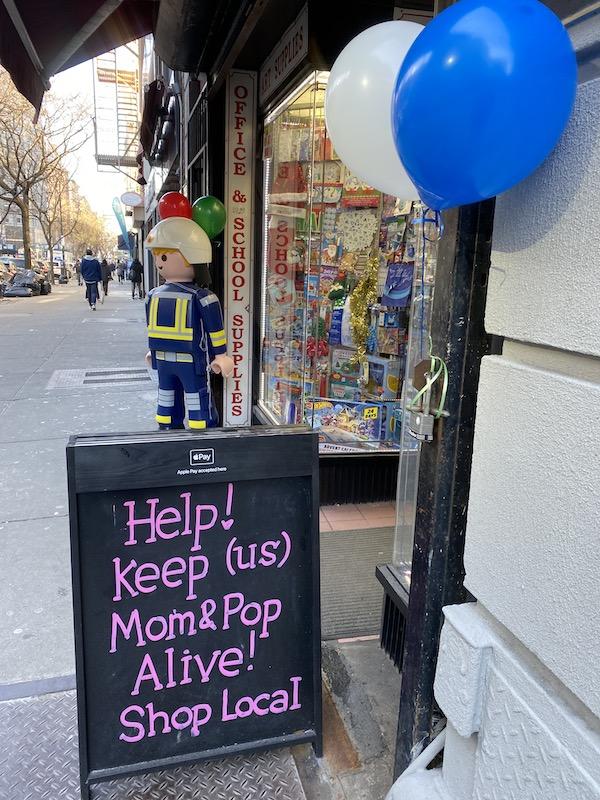 In November 2020, West Side Kids was also featured in a national story – this time by NBC News – about the challenge of keeping a small business alive through the pandemic.

As both of these small businesses have survived through many ups and downs, let’s hope they continue to innovate and prosper, and let’s help them by giving them our business.

Stationery and Toy World can be visited at 125 West 72nd Street or online at stationeryandtoy.com.

West Side Kids can be visited at 498 Amsterdam Avenue or online at westsidekidsnyc.com.