Home
Food & Drink
Best Sushi on the Upper West Side

The best sushi on the Upper West Side is some of the best in NYC! Sushi is a healthy and delicious food that can be enjoyed in many-course omakase or quickly at a bar, sushi is as much an Upper West Side food as pizza or bagels. There are sushi places everywhere you go, and many are quite good. Here are a few Upper West Side sushi joints I particularly recommend.

Sushi Kaito opened in June of 2017 and has since made non-stop headlines in the NYC food scene. They were included in The Infatuation’s list of the best new restaurants during the winter of 2018. There are only two dinner options (12 piece of 16 piece) so you won’t be troubled with a tough decision. Most of their product comes straight from Japan, and their reviews are just as strong as they were when we first wrote about them. 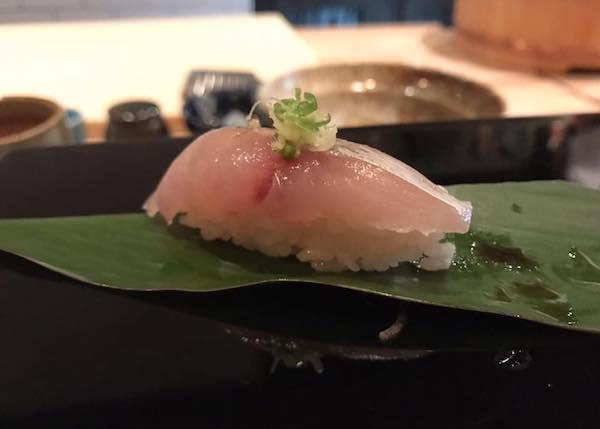 The newest addition to our list – having opened in November 2019 – has already earned almost perfect reviews from its patrons. The intimate, wood-accented omakase restaurant eight-seat sushi bar is run by Chef Takeda Yukihiro, who uses seafood ingredients exclusively shipped from Japan. 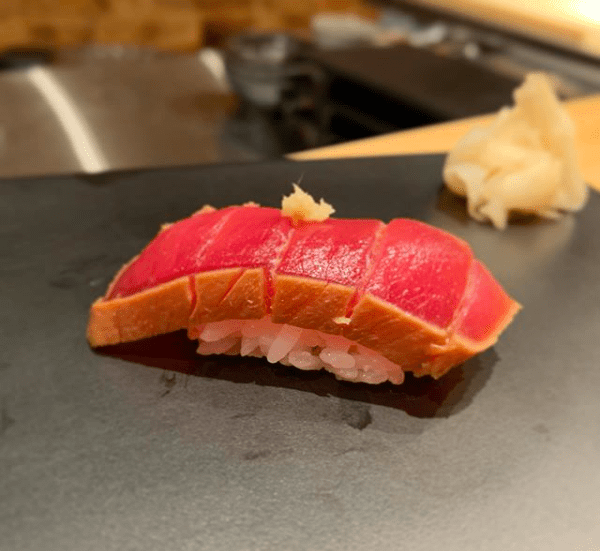 No one seems to carry more different species, and all super fresh. This is definitely the place for sushi purists: few crazy roll creations here, but tons of smooth, soft, perfectly sliced and placed little bits of sashimi.

I asked the chef to choose some fish for me, and although this was pricier than Mike’s similarly sized and also excellent regular sashimi dinner, the delicately prepared fatty tuna, yellowtail, poached lobster and grilled butterfish were all just lovely, and somewhat unusual, and the giant single raw oyster was exceptional. We also enjoyed the hijiki salad. 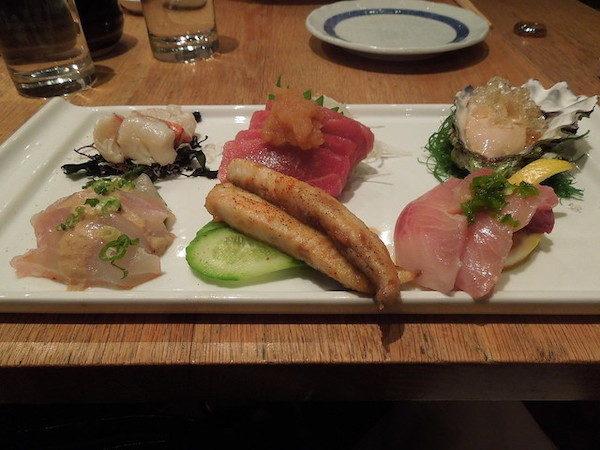 I love Momoya’s modern looking natural-materials decor, the outside seating, the hip vibe and, of course, the food. They seem to have really maximized creativity in their menu without creating a flavor profile that could be accused of being anything but Japanese.

Their 6-seaweed salad is a very tasty educational experience, their edamame dumplings feel luxurious in your mouth, and their kanpachi with yuzu is another great way to begin the meal. Although I lean towards Chirashi (which is great), their rolls have tempted me too — a recent special was a crab and avocado roll topped with spicy scallop and shrimp, which had an amazing sauce on it and some little crunchy bits on top, and it was fabulous and very filling (that was a one-roll meal!) They also have enough non-sushi deliciousness that I can drag our Dad there with no complaints. 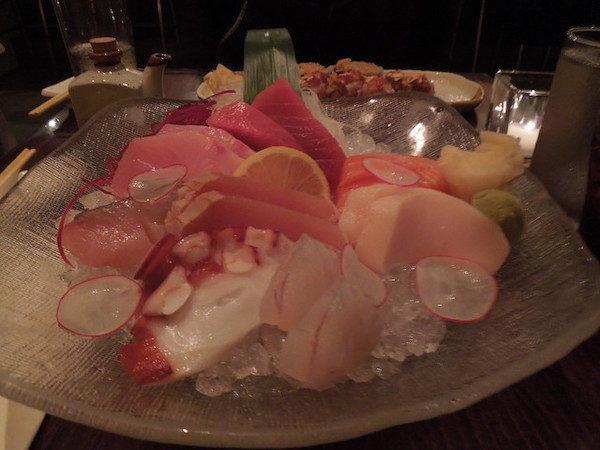 Sushi Yasaka, located at 251 West 72nd Street, is a popular spot for seafood and sushi on the Upper West Side.  Many people call it their go-to spot for neighborhood sushi, and I can see why! With its simple, classic offerings and consistently friendly and attentive service, it can often be crowded, so I recommend you make reservations.

For dinner, try the Omakase for two (twelve pieces, chef’s choice), for a unique sushi experience.  For lunch, there is a Mini Omakase available.  The pieces are melt-in-your-mouth soft and buttery, and the price is right. There is also a beautiful selection of hot and cold appetizers, sashimi, sushi, and tempura a la carte, and traditional maki and hand rolls.  The ambiance at Sushi Yasaka is casual, calming, and pleasant, and most importantly, the fish is fresh and delicious. It can be hard to find such tasty, quality sushi at these prices, so Yasaka is a true catch. 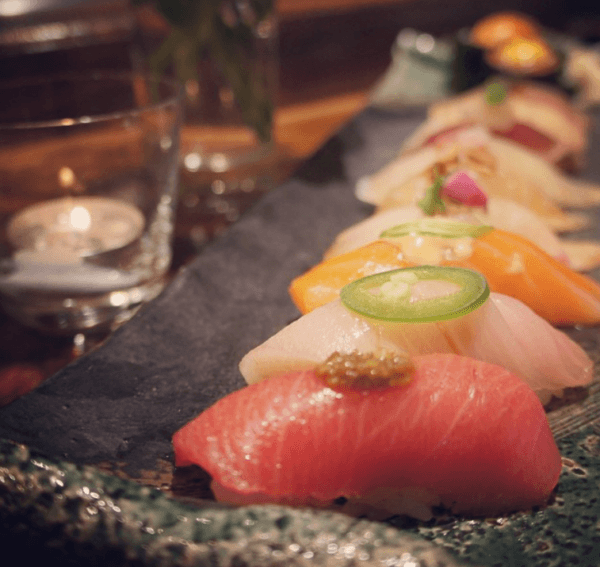 Going to Flame is the equivalent to both dinner AND a movie. This Upper West Side sushi restaurant is also a hibachi restaurant, which means you get to watch the chefs live! It’s a great venue for a first date, as there’s plenty of built-in conversation consisting of “wow!” and “look at that!”. And maybe as your confidence grows, some “I can probably do that”. 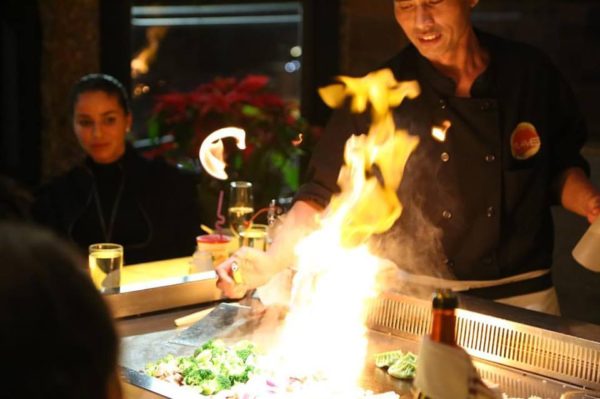 The menu at Flame includes house made dim sum options, like beef potstickers and mushroom dumplings. And a massive sushi and sashimi menu with all kinds of combinations. 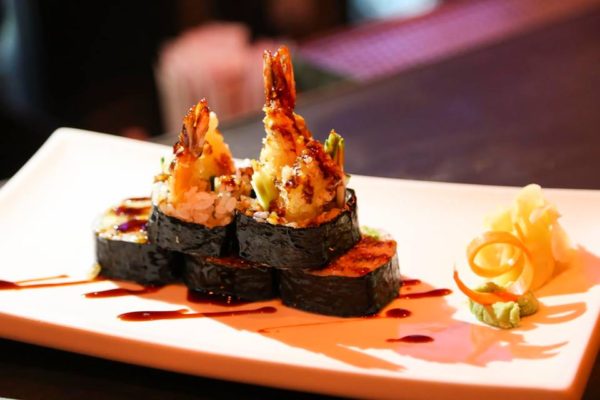 Get the newsletter for more food tips

Best Vegetarian Restaurants on The Upper West Side