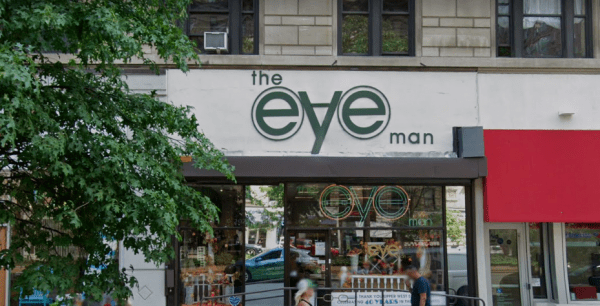 When you think Upper West Side institutions, The Eye Man, located at 2264 Broadway between West 81st and West 82nd street, is in the same upper echelon as Barney Greengrass, Westsider Rare and Used Books, the Vitamin Peddler and Zabar’s, to name a few.

We recently got a tip from ‘Upper West Sider’ that The Eye Man, who’s been on the Upper West Side since its inception in 1976, could be in trouble. A real estate listing for 2260 Broadway is posted at Winick.com and it’s important to note that 2264 Broadway, where The Eye Man currently holds post, is connected to 2260 Broadway. The possibility that The Eye Man might lose its lease was in the air so we set out to get to the bottom of it.

Fear not, The Eye Man is not closing. ILTUWS made a recent visit to the shop and spoke with two employees, Hedda and Shafi, who informed us that by March 15 The Eye Man will be moving across the street to the vacant corner storefront space at 2261 Broadway; which is also between 81st and 82nd streets, just a minute or so away from where they are now.

Shafi told ILTUWS that the pandemic has been tough on business but they’re still here, they’re staying, and he hopes that the community will continue to support small business. Shafi said The Eye Man is hoping to make the transition to 2261 Broadway across the street by mid-March with no cease of operation; meaning when their new shop opens, their current store at 2264 Broadway, the same location featured in the 1998 Rom-Com classic, You’ve Got Mail, with Tom Hanks and Meg Ryan, would segue out.

Hedda, who’s been with The Eye Man since 1981, told ILTUWS that she’s seen 3 generations of Upper West Siders come through their doors for eye exams, contact lenses, and eye glasses. “We never advertised. I’d fit kids with glasses, then they’d get married and now they’re bringing in their kids,” Hedda said with a hint of concern as the times have certainly changed and the ability for people to use fast shipping, low cost companies like Amazon or commercial retailers like Warby Parker continue to pose a threat to small business and Upper West Side culture.

Business was noticeably down during the first wave of the pandemic, but “After those first 3 months, people came in and were buying multiple frames” said Hedda. It seemed the local community and fans of The Eye Man at large were making up for lost time once it was a little less suspect to be out and about around town.

This is remarkable news, indeed, and we look forward to the opening of the next iteration of The Eye Man on the Upper West Side.

We’d also like to thank The Eye Man himself, Lloyd Chautin, who recently retired. He’s been “The Eye Man” since day one in 1976. The store remains in good hands.