Home
Food & Drink
There was Once a Cafe at Bethesda Terrace 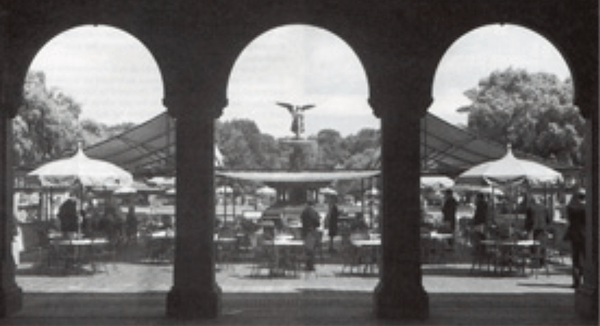 Take any issue of a newspaper at random and consider the contrast between articles covering what’s traumatic and events so frivolous they may take your breath away. So, for example, The New York Times on August 2, 1966 reports Vietnam War news about a group of 120 women and children found hiding in a riverbank cave seeking shelter from US troops routing out Vietcong in South Vietnam. And, the same day, the paper runs photos and a story about an almost ridiculously playful champagne launch at the Fountain Cafe, hosted by NYC Mayor John V. Lindsay and Parks Commissioner Hoving, for select guests and the press. The headline of this piece was “The Mayor and Commissioner Took to the Lake in a Red, White and Blue Rowboat, Splash, Bam, Wow!”

The article details two overloaded red, white and blue rowboats – one occupied by Mayor Lindsay, Parks Commissioner Hoving, former Miss America Bess Myerson and some others – having a water fight with members of the press who occupied the other boat. Using oars to splash water at each other, the story notes that they only stopped to prevent the Mayor and the former Miss America from getting drenched.

The brainchild of Joe Baum, creator of showpiece NYC dining venues including The Rainbow Room, The Fountain Cafe was designed for Restaurant Associates by James Lamentia. Located on Calvert Vaux’s masterpiece Terrace in one of the most beautiful parts of Central Park, it faced the bronze statue of Lady of the Waters designed by Emma Stubbins in 1868 and installed in 1873. Stubbins was the first woman to receive a public art commission from New York City. Born in the United States, she and her life partner actress Charlotte Cushman were part of the expatriate arts community in Rome, Italy, for 20 years in the late 1800s before returning to New England.

Though never really about gourmet food and more focused on ambience, the menu of The Fountain Cafe included salads and sandwiches, iced coffee, beer and wine, according to a story that appeared on September 17, 1966 in The New Yorker’s “Talk of the Town” section. The piece described the look and tone of those who lunched there. “Three young matrons carrying Saks Fifth Avenue shopping bags and dressed in nearly identical blue linen frocks settled at a table and, with disarmingly unstudied choreography, slipped off their nearly identical low-heeled shoes. Next to them four businessmen arranged their attache cases at their ankles, took off their jackets, ordered roast beef sandwiches and fell into a discussion of I.B.M stock.”

Read More: Remembering Old Restaurants of the Upper West Side

The cafe, with its green and white umbrellas, was intended to be part of the cultural enhancement of the park and the concept of NYC as a “Fun City,” supported by Mayor Lindsay and his administration. Other activities associated with this effort to energize city activities and bring in revenue included promoting New York as a center for the film industry. According to a 2010 article in Places Journal, “The founding of the Mayor’s Film Office — the first agency of its kind in the world — remains to this day one of the Lindsay administration’s signal achievements, an innovation in governance since replicated by agencies or commissions in almost every state and major city in America, and scores of countries and provinces around the world.”

During this era, Central Park witnessed a range of significant and contrasting events including concerts, protest marches and the Terrace’s increasing popularity as a hangout for hippies and flower children (along with a long unmanaged and increasing presence of drug dealers and addicts). Drastic budget cuts during the fiscal crisis of the 1970s also contributed to a decline in maintenance, increasing public safety concerns.

Eventually, the negatives outweighed the positives, and the Cafe, which may have been too early for its time, closed down. In the following years, major renovations were made to restore the beauty of the Terrace, the fountain and the bronze statue, which was more than 100 years old in 1974 when the Fountain Cafe closed.

The Days Are Numbered At Telio