It’s an Upper West Side call to hearts. I was recently approached with a request from West 69th Street Block Association President Eileen Vazquez. She was looking to see if I could help a Traveling Piano Man named Danny Kean find a place to stay in the city for 2 weeks, so he could come to the neighborhood and perform with his dog, Mo. Mo’s part beagle with an English bulldog body. Danny has been traveling and playing piano with Mo since he rescued him as a 5-month-old puppy. Now Mo’s about to turn 12 and Danny’s truck is over 30.

Danny and Mo have until Tuesday, August 31 to find a place to stay so they can perform improvisational piano around the UWS. Danny tells us he is vaccinated, and described the kind of living space he’s looking for. “As I become older now (66), it has become a little more difficult as I need a clean, quiet, private space with light and at least a week or two in order to do my work wherever I go. No baby-sitting is needed as I am always working, but of course I’d like to spend some time with my host.”

Danny told us that “staying with strangers to propagate the idea of strangers becoming less afraid of each other throughout the world has been part of my mission statement since the start of this present journey.”

Danny has performed in NYC before. Formerly performing as Raggin’ Piano Boogie, using the same truck he has now, Danny has been hired for events at the World Trade Tower Plaza and for the opening of the refurbished South Street Seaport. 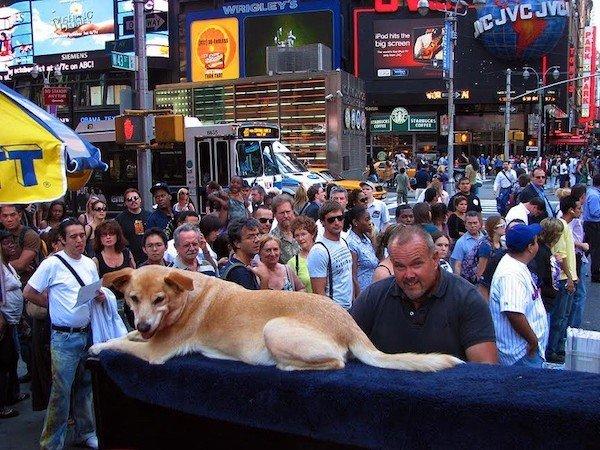 Danny and Mo have informally played in Times Square, and he’s even driven his truck into Washington Square Park for some improv, pulling it off (pre-pandemic) with no hassles. He’s also known for having given away a full truck of fresh picked country corn in Little Italy.

For a few days during 2008, he also performed at Verdi Square. 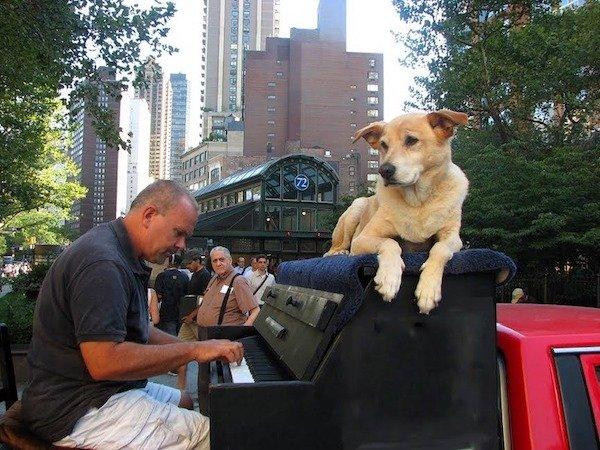 We asked Danny about his dog Mo. “He has zero obedience issues and behaves from a place of empowerment and wanting to please. He’s walked down the Las Vegas strip without a leash, we’ve sat in the back of movie theaters together. When he was younger he loved to play with other dogs. Now he’s more low key.”

The Traveling Piano Man said Mo has brought healing to many people in difficult situations such as Sandy Hook, CT after the school shooting; the Joplin, MO tornado in 2011; and on Skid Row in LA, to name a few. They have stayed with other people many, many times and there has never once been an accident of any type with Mo, he told us. “He is a clean dog, rarely if ever barks, he knows how to behave with others from constant interaction in a domesticated life. We have been together 24/7 since he came into my life at about five months old.”

We asked Danny if there’s any places he’d like to visit if we can find a place for him and Mo to stay.

“What first comes to mind is B&H Dairy for some borscht and pierogi on the Lower East Side … then there is Muffins Cafe in your area for a good bagel. Of course I need a couple slices of real NY pizza (extra cheese, pepperoni and mushroom) and… I have been craving a good NYC Rueben sandwich for years!

“As far as places I’d like to go, well everywhere in NYC! I’d love to go to a live taping of SNL or better, the Colbert Show. I was there in 2015 for the fourth taping I think. It was what I saw as my last hoorah in NYC ever. There has been a dream in my head ever since … to have the show use the Traveling Piano for a day with free rein in the city or to create an ongoing segment around the country. I would not even need to be part of it!”

Eileen Vazquez, West 69th Street Block Association President, is a big fan of the Traveling Piano Man. “I found out about Danny on social media more than 5 years ago. He made a comment on a mutual friend’s FB page and I agreed with what he said and started following him,” she told us. “He was doing his work in Las Vegas and I had recently moved from there, so we would periodically talk about that.  Then one day he asked me if I could bring a birthday gift and cake to a dear friend of his that lived in Yonkers. I agreed and after that we had a long conversation on the phone and I really liked his spirit, vision and selflessness.” Eileen finally met the Traveling Piano Man live last week when he performed in New Jersey.

“We had agreed to have lunch and spend the afternoon together, so I was expecting a quiet afternoon.  He gave me his location and when I arrived he had a crowd around the truck and people in the truck playing the piano! Each time a new person came up the street and asked “Is that your piano?” He enthusiastically replied “Yes, do you want to play?”

Eileen also said she’d “love to have him play on West 69th Street … I’m actually thinking about something bigger than that, but let’s see if we can get him some housing first!”

Fire at The Belnord