The electric Kool-Aid acid test is on its way to the Upper West Side. At last night’s Community Board 7 Business & Consumer Issues meeting, a liquor license for The Wolfe – a forthcoming bar inspired by American author Tom Wolfe – was given preliminary approval for 425 Amsterdam Avenue between West 80th and 81st streets. The site is currently home to Spaghetti Tavern, which no longer serves spaghetti (or any food).

It’s unclear what the current situation is at Spaghetti Tavern, but we’ve reached out to the bar and restaurant and will provide an update if and when we hear back from them. Spaghetti opened in early 2021, replacing Frank Mac’s Pub, which replaced McAleer’s. 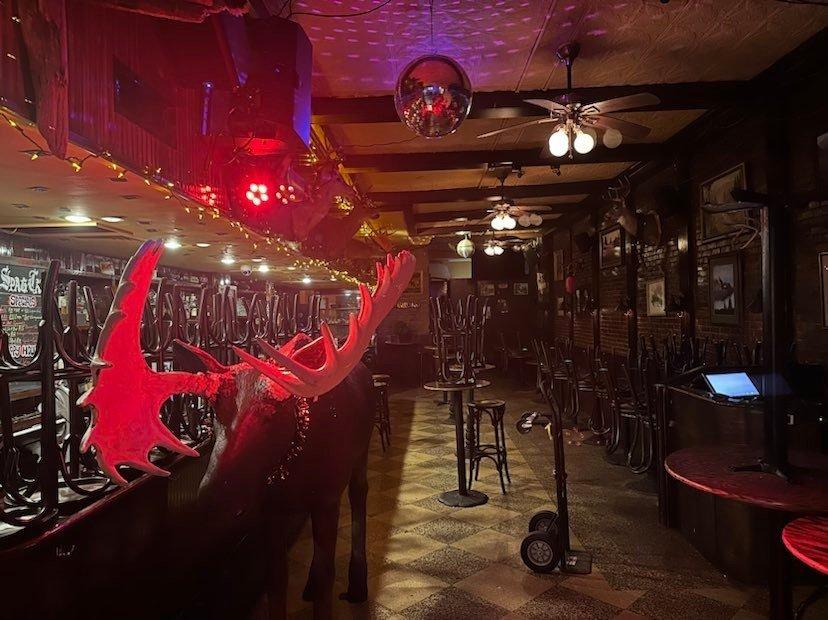 We went to Spaghetti Tavern this evening to try to find out what’s going on. Nobody was inside (photo was taken against glass).

The new venture is from The Stout NYC Hospitality Group, which runs bars all over Manhattan, including Stout Penn Station and The Half Pint + Ernie’s on West 3rd Street. They also operate Amity Hall at 982 Amsterdam Avenue between West 108th and 109th streets.

Martin Whelan, owner of The Stout Hospitality Group, touted his original signed copy of Tom Wolfe’s The Bonfire of the Vanities amid his presentation. Renovation plans will include “full cosmetic work” like refacing the bar and painting the brick work while bringing in all-new furniture and banquettes. There will be no live music, and the expected hours are 11:30 a.m. to 2 a.m. during the week, with a 3 a.m. closing on weekends. Their liquor license application received unanimous approval from the CB7 subcommittee.

Tropical Sensation, a Dominican restaurant that’s been in operation since 2008 at 953 Amsterdam Avenue, between West 106th and 107th streets, also had its liquor license renewal approved unanimously.

The evening wrapped up with Talia’s Steakhouse and Bar at 668 Amsterdam Ave between West 92nd and 93rd streets, an Upper West Side stalwart with 20-plus years in the neighborhood, getting unanimous approval to move its bar to a new location within its space.

The next full Community Board 7 meeting is slated to take place on Tuesday, February 7, at 6:30 p.m., where the final vote for these applications will take place.

Bettola is Closing its Doors