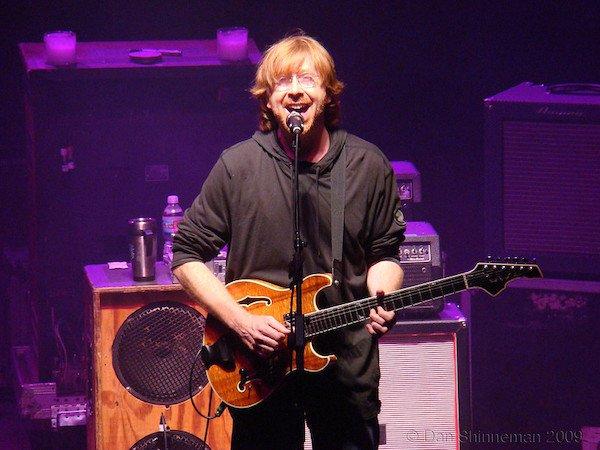 For the past five Fridays, Trey Anastasio of the rock band Phish has been playing without an audience at the Beacon Theatre. It’s part of an eight-week virtual residency that’s being streamed for free exclusively on Twitch, every Friday at 8:00pm. It began on October 9 and runs thru November 27.

This series is titled The Beacon Jams and features acoustic and eclectic performances by Anastasio, home audience interactions and surprises galore.

Every Friday is a brand-new experience, top to bottom, with no song repeats, band line-up changes and requests taken from the viewing audience (who communicate with Trey and the band via Twitch’s chat component). Anastasio has a TV monitor in front of him where he can see messages from attendees around the world.

That’s right, this is an international affair – but that shouldn’t be too surprising since Phish has a banner hanging in the rafters at Madison Square Garden, the worlds most famous arena. It was hung in 2017 after Phish completed a 13-night residency at MSG titled Baker’s Dozen.

All proceeds from The Beacon Jams will benefit Phish’s long-running non-profit organization, the WaterWheel Foundation, and its new Divided Sky Fund (DSF) whose initial goal is to build a treatment center in Vermont. The Divided Sky Fund will focus on delivering quality care and compassionate treatment for those suffering from addiction. You can donate to the Divided Sky Fund Here.

Not known to most fans, or locals for that matter, is the fact that Trey and his band have also been rehearsing on Thursday nights in a kind of ‘dress rehearsal’ for each Friday’s unique performance. Having witnessed some of these rehearsals, it’s a real sight to see unknowing people walk by with looks of bewilderment on their face that turn to joy as they realize the music never stopped.