The latest removal of Trump’s name from the Upper West Side was the Donald J. Trump highway sign, which until Monday was located on the southbound side of the Henry Hudson Parkway, north of the Boat Basin exit on West 79th Street. 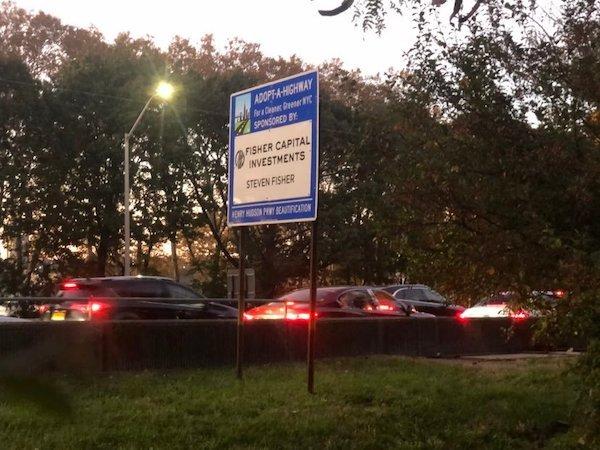 Taking Trump’s place as the new Adopt-A-Highway sponsor is Fisher Capital Investments. A sign for Fisher was installed on November 8, shortly after former President Trump’s was taken out.

In November 2020, Richard Robbins started a petition to remove the Trump Adopt-a-Highway sign. Robbins wrote that “NYC DOT’s own policy as per its website is that ‘Highways can be adopted by individuals, companies, or organizations (but not political candidates and campaigns).’ This sign should have been removed in 2015 and, according to DOT’s policy should not be in place now, as Trump has stated an intention to run again in 2024.”

The petition gained over 1,650 signatures – and the attention of Assembly member Linda B. Rosenthal – who spoke with the DOT Commissioner and wrote to the agency demanding the sign’s removal.

“I am pleased that after much advocacy, the New York City Department of Transportation agreed not to renew its contract with the former president; his name should not be celebrated in any way,” said Assembly member Linda B. Rosenthal in a statement sent to ILTUWS. “Donald Trump’s presidency is a stain on our nation’s history. With his every step, he worked to dismantle our fragile democracy and helped to lead a violent insurrection against our government. He espoused homophobic, misogynistic, ableist and xenophobic views and used violent rhetoric to stoke fear and breed division. Though it may be impossible to remove his name from our collective history, we can and must remove his name from New York’s vaunted institutions and infrastructure.”

Here’s the November 8 letter the DOT addressed to Rosenthal, in which it states that the sign would be removed.