Hats off to Jeannie Gesthalter for securing a new location for her upscale milliner shop.

Formerly located at 245 West 72nd Street, Jeannie’s Dream shut down in July 2020 due to conflicts with her landlord – in addition to concerns over potential looting, a pervasive fear which caused many local store owners to board up their windows last year. “I was nervous because of that, so I closed the store.”

However, the hat designer and merchant started looking for a new space and found one at 60 West 75th Street, between Columbus Avenue and Central Park West. Gesthalter says she hopes it will be wonderful. 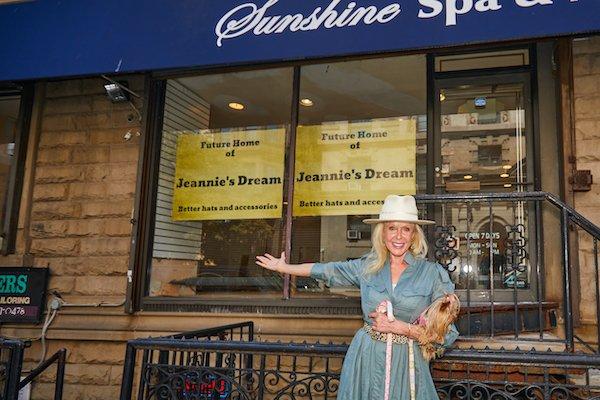 “I’m excited to see my people again. I miss them,” she said. “There’s no retailer that’s not an optimist. That’s a requirement of being a retailer. To be otherwise is not an option.” The store is expected to be open in about two weeks.

Jeannie’s Dream started 28 years ago in Cedarhurst, Long Island, before making its way to the Upper West Side in 2014. The shop offers hats ranging from $29 to $1,750, designer jewelry, hair accessories made with Swarovski crystals, capes, and gloves, Gesthalter said.

“We like every woman to feel beautiful when she walks out,” Gethalter said. “Especially for chemo patients, women with hair loss, and when they leave it’s important to me that they feel great!”

The store offers about 2,500 styles every season and works with 23 designers in and around New York City. Gesthalter also says that every hat is hand-made, using only the finest materials such as felt made from silk velour and straw from Switzerland. Inventory also includes hats from the London milliner who designs pieces for the Royal Family, Philip Treacy. Gesthalter says she outfitted all the U.S. broadcasters with hats for Prince Harry and Megan Merkle’s wedding, too.

Resuming a brick-and-mortar has special meaning to Gesthalter, who says she was hit by a car in March 2021 on West 83rd Street and Central Park West.