In late June, the Department of Transportation unveiled New York City’s first curbside electric-vehicle charging station in the Norwood section of the Bronx, while announcing that another one-hundred stations would be installed throughout the boroughs by October 2021.

The DOT’S announcement was made alongside Con Edison and FLO, a Canadian company which operates a network of charging stations which are starting to crop up around the city.

At the 2019 announcement of the pilot program – which is called Curbside Electric Vehicle Charging Pilot – it was stated that additional charging stations would be installed on West End Avenue between 66th and 70th Streets and on 86th Street between West End and Riverside Drive. So these should be installed by October as well.

The initiative aims to encourage electric-car ownership by making it less costly than finding a station in an NYC garage. “Convenient curbside charging for EVs is a game-changer especially for those without access to private parking and charging ports,” said Lenny Singh, Senior Vice President of Con Edison’s Customer Energy Solutions. “We’re working closely with the city and state to make it easier for all New Yorkers to replace gas-powered cars with zero-emission electric vehicles, and enjoy the benefits of cleaner air and a healthier environment as Con Edison continues its efforts to achieve its clean energy goals.”

But Upper East Site reports that the West 93rd Street station – along with some newly installed stations on the Upper East Side – have been repeatedly blocked in by gas-powered cars over the last month. 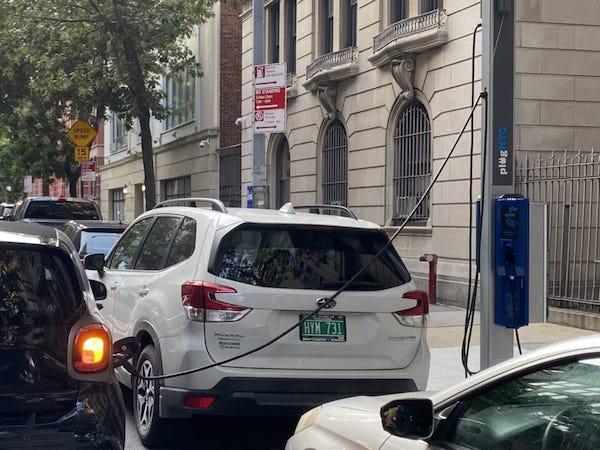 An electric car double-parked because the station is blocked. Photo by Upper East Site.

Several cars have been towed and ticketed as a result of not following the new rules – which state that these spaces are for EV charging only.

“The citywide pilot program aims to increase the adoption of EVs, critical to reducing greenhouse gas emissions and air pollution, and will enable New York City to meet its goal of carbon neutrality by 2050,” the DOT’s press release states.