More than 175 residents and parents gathered virtually Tuesday evening to discuss with city officials the safety of students and the temporary homeless shelters located at three UWS hotels.

City Council Member Helen Rosenthal and New York Police Department Captain Neil Zuber of the 20th Precinct provided answers to questions about whether convicted sex offenders are still residing in the shelters, how much police presence will be available during school commuting hours, and what is being done about quality of life issues – and more – during the 1.5-hour-plus meeting via Zoom.

Lucerne Residents to be Relocated

Also in attendance was Katie Bower from Project Renewal, which oversees the homeless shelter at The Lucerne Hotel at 79th Street. Representatives from the other shelters, housed at the Hotel Belleclaire (West 77th) and Belnord Hotel (West 87th), were not present.

Rosenthal began the call by addressing head-on the issue of convicted sex offenders housed in the shelters.

“There are no Level 2 or higher sex offenders in the shelters,” Rosenthal said. “It’ll take time for that to be reflected in the registries.” However, she added, there are no guarantees that they won’t be placed in shelters in the future.

Two schools, PS9 and PS87, are within blocks of the three hotel-shelters, and parents have been vocal about their safety concerns due to what they say is an increase in open drug use, public lewdness and acts of violence, in addition to the presence of convicted sex offenders. Furthermore, critics of the homeless shelters say that more people are moving out of the neighborhood due to the homeless residing in the shelters and not just because of the COVID-19 pandemic.

As for heightened police presence during school commuting hours, Zuber said that while the precinct cannot ask for more police officers beyond what the precinct already employs to patrol the school zones during drop-off and pick-up hours, all officers will be deployed to oversee children getting to and from school safely as much as possible.

“The officers we have, if we have 5 cars on patrol, and if [there is] no emergency, they will be on directed patrol,” Zuber said, adding that police officers will change their paths to accommodate a change in foot traffic if the majority of children going to school decide to take a route that is, for example, away from West 79th Street, the location of the Lucerne Hotel.

“If they’re more comfortable on West 77th than on West 79th, [for example] they’ll follow where the children are,” Zuber said. “If there is a 911 emergency call, they’ll have to pull out. If there’s no emergency, they’ll be there.” 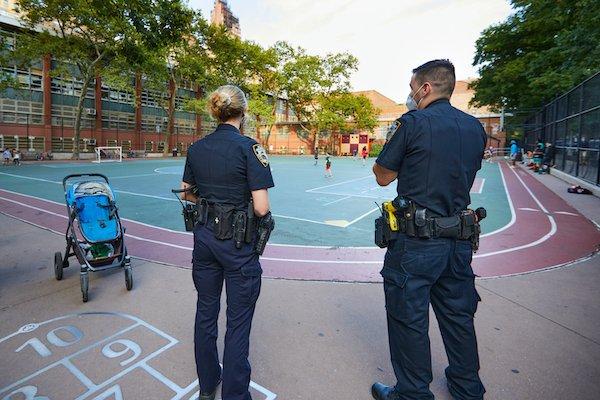 Police officers from the 20th Precinct respond to a call regarding a strange adult at the Tecumseh playground. Photo: Lee Uehara

The meeting then turned to Project Renewal’s guidelines by which all shelter residents at the Lucerne must abide.

“Curfew is 10:00 p.m.,” Bower said, adding that while all residents are expected to be back by 10:00 p.m., they are not required at all to leave the premises. And if the curfew is not honored, they “will be bussed somewhere else.”

Other questions asked about shelter residents included whether anyone has contracted Coronavirus and details about security. Only one person has tested positive and was removed but must quarantine for 14 days before returning, Bower said. At the Lucerne, there is security with about 20 guards and two supervisors who make their rounds, Bower also stated, adding that the Lucerne makes two daily rounds with the Belleclaire.

Organizations overseeing the shelters have been speaking with principals as well as other school leaders, Rosenthal said, and that work is being done to better respond to 311 calls as well as trying very hard to “add extra security outreach.”

Interspersed throughout the first hour were questions about crime and quality of life concerns, such as lewd acts, urination in public, open drug use and litter containing syringe needles as well as whether there have been arrests at the shelters.

“There have been no arrests at the Lucerne,” Zuber said. What people might have witnessed are police officers aiding in a medical emergency, he added. “There hasn’t been a crime.”

For other criminal issues such as indecent exposure, urinating in public, lewd acts, open drug use and other infractions, they need to be reported right away by calling 911, Zuber said. “For violations, for us to act on them, a police officer has to observe it.”

Zuber went on to say that people seem to take pictures of such acts and then send those photos to the press and the mayor, but then fail to call 911 and report them in real time. He said that receiving such information is useful for the precinct in being able to take action.

“Be willing to talk to the police officers,” Zuber said. “But if you call 911 and say, ‘I’m witnessing this crime and want to be anonymous,’ our hands are tied.”

Zuber did say that the message to get people to call 911 is being heard because narcotics officers got involved recently and made arrests of 12 drug buyers and sellers in one day, confiscating more than $10,000 in cash, some marijuana and heroin, as well as a $110,000 car used in the transaction.

“It’s a huge quality of life issue as well as a prosecutable crime. I can’t promise 12 arrests every day but as we go out and make this impact…” Zuber said. “That’s where 911 calls come in…”

As for other less serious quality of life issues, the reality is that they’re not being prosecuted, Zuber continued. “We have a directive to not to waste resources to enforce them.” And for other concerns mentioned, such as litter and the discarding of syringe needles on the sidewalks, Zuber said that the city’s sanitation department is responsible for addressing those things.

At one point the meeting took a quick turn when a mother asked Captain Zuber how to handle children being traumatized if they were to see too much of a police presence.

“Police presence is traumatizing children?” Zuber repeated, and without skipping a beat: “I have no idea how to respond to that.”

Lee Uehara is not only a journalist and documentary-style photographer, she is also the host of the podcast, House of Lee NYC. Her work has appeared in The New York Times, the Los Angeles Times and many other news outlets through her work as a former reporter for The Associated Press. You can usually spot her in the neighborhood walking her dog with a camera in hand. Visit HouseOfLeeNYC.com and follow her on Twitter and Instagram.

Adopt Your Own Litter Basket Child

STOP IT WITH THE FIREWORKS!!